Al-Attiyah now an hour ahead as Sainz falters

It was only a small error that caught out former leader Carlos Sainz yesterday, his Touareg bellied out on just a 2 meter high crest of sand and suddenly his hopes of victory, which had been 'almost assured' a couple of days ago, were downgraded to 'remote'. It just goes to show that nothing is written in stone in the Dakar... until the last stage is over, it's written only in sand.

The stage was laid out in two halves separated by a 160km 'neutralized section' and was shortened by 100km due to heavy rains washing away some of the course, so 622km of mountain tracks high in the Andes is what awaited the competitors. And Sainz had a mountain to climb, both literally and figuratively as the route climbed to a pass at some 3400 meters above sea level. Somewhat harder to overcome though was his VW team mate Nasser Al- Attiyah and as an indication of how hard the pace has been all through the ...

It was only a small error that caught out former leader Carlos Sainz yesterday, his Touareg bellied out on just a 2 meter high crest of sand and suddenly his hopes of victory, which had been 'almost assured' a couple of days ago, were downgraded to 'remote'. It just goes to show that nothing is written in stone in the Dakar... until the last stage is over, it's written only in sand. 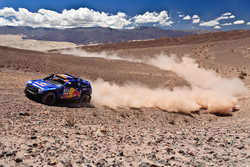 The stage was laid out in two halves separated by a 160km 'neutralized section' and was shortened by 100km due to heavy rains washing away some of the course, so 622km of mountain tracks high in the Andes is what awaited the competitors. And Sainz had a mountain to climb, both literally and figuratively as the route climbed to a pass at some 3400 meters above sea level. Somewhat harder to overcome though was his VW team mate Nasser Al- Attiyah and as an indication of how hard the pace has been all through the event, even though Sainz was desperately driving for victory after 224km he could only pull out a mere 1'24 over the confident Qatari. Even on roads that suited him it just wasn't possible to go any faster. It's been flat out for 12 days now.

But just a short way into the second section of the day the seconds he needed to make up became irrelevant as history seemed to repeat itself for 'King Carlos'. His Touareg ground to a halt with broken suspension and that was it... Al-Attiyah disappeared in a plume of dust over the horizon and was gone, victory now firmly in his sights. Sainz was stationary for more than an hour while his support team repaired the damage but by the time he made it to the end he'd lost an hour and 14 minutes, and all hope of a second win. And just to rub salt into the wound Al-Attiyah didn't slow down once the news was radioed to him... he went on to win the stage.

This is what the leader had to say when journalists caught up with him: "Today we had a good start. We just stayed behind "Peter". Everything was okay, the car worked very well and there were no problems. There was a lot of dust on the stage, but the good thing is that we finished and we'll see what we can do tomorrow. Tomorrow will be a different day as well. I don't know what happened to Carlos. I hope he can fix his wheel. Today I think Carlos was pushing a lot. From my side I'm really happy, I did a very good job and so did my co-pilot and the team. I'm quite happy and I will do my best to reach Buenos Aires. Tomorrow will be a different day and we will open the stage, but I don't think there will be any problems for us and we'll take it really easy".

Sainz though was understandably distraught. "I pushed as hard as I could and when I was in Nasser's dust, I didn't see a hole. I went straight into it and broke the suspension. I tried everything I could to go on the attack, because I haven't come here to finish second. For me it's first or nothing, so finishing second or third is the same".

In third place for much of the way was Stephane Peterhansel having a good day in the X-Raid BMW just a couple of minutes behind the leading VWs until Sainz dropped out, promoting him to second. Yesterday's stage winner Giniel de Villiers took third and was followed by the two BMWs of Polish ex-WRC driver Krzysztof Holowczyc and Portuguese driver Ricardo Leal Dos Santos.

In a firm 10th place and still well ahead in the buggy category is German Matthias Kahle in the scarlet SMG. They lost a lot of time yesterday when their electric loom caught fire but this was fixed overnight and such are the gaps lower down the order that they retain their position in the top ten several hours in front of their nearest rival.

KTM rider Cyril Despres could do only one thing today and that was attack at the maximum from the outset... and for the first 124km he was leading the field, but despite his best efforts he didn't manage to make a significant break and was even reeled in by Chilean Aprilla rider Francisco 'Chaleco' Lopez, who riding his own race with no thoughts of victory, had opened up a 59" margin by the CP at 178km. It was a stage dominated by the top three in the overall standings as Marc Coma was riding a solid stage, only a minute and a half behind his only challenger for the overall win, Despres.

The riders were re-grouped after the 'neutralized section' and the amended positions meant that Despres set off half a minute behind Coma. In front though 'Chaleco' got temporarily lost with a navigational error costing himself the stage victory and which in turn slowed Coma with the task of 'opening' the route. This allowed Despres the opportunity to catch up with him, although once past, Coma stuck to his rival's back wheel and followed him over the line dropping just a controlled 2'12.

Despres won the stage but surely won't be celebrating the 26th victory of his career in the bivouac too jubilantly tonight as this stage also saw his hopes of overall victory slip even further out of his grasp. Still though, he hasn't given up hope, "To succeed, you have to try first, and I'm trying. I'm doing everything I can, everything I know. It has to be said it was a superb special. Even if the time wasn't great, it was a pleasure to ride. In 2007 I won two days before the finish, and if I don't have a hope, it's impossible to ride at speeds like that. I'm still hoping and carrying on attacking. With Marc, we both ride KTM bikes, which is an advantage. We're quite close, but for the moment, the fat lady hasn't sung yet. There are still two days left".

Coma though seems quietly confident of another victory, "Today was a great day. It was a hard day, though, and very long with a lot of rocks and dry river beds. In the end, both parts were superb and we managed to ride at a good pace. There's still tomorrow which will be a hard day, so anything is still possible. Tomorrow evening, we'll obviously be closer to the finish, but I have to make sure I get through the day okay. A calm approach is best: if something happens, then I'll just have to adapt, but if I take things professionally, then it should all be ok. I repeat: tomorrow is another long day. We'll see what happens afterwards".

Few would dispute the fact that Russian Vladimir Chagin is the undisputed Dakar master. A select few have the aim of equaling him, even less have the hope of bettering him. One of the very few is his two time winner and Kamaz team mate Firbaus Kibirov, but at this stage in the event a 17'27 lead looks all but impossible to surmount.

The massive trucks thundered off into the mountains and were remarkably evenly paced with Chagin holding a set 20 second advantage and their young team mate Eduard Nikolaev dropping consistently back at roughly 30 seconds every 50km.

Chagin was never really threatened though and for some reason which has not as yet been reported Kabirov lost roughly 13 minutes in the last part of the stage, letting Spain's Pep Vila in his Iveco through into second, 10'53 behind Chagin. The Czar added another stage to his already immense tally, taking it to 62. He now starts tomorrow with an advantage of just over half an hour over Kabirov.

Being 1:11'08 ahead of his closet rival Argentinean Alejandro Patronelli on his Yamaha has the most assured lead of any of the classes and today rode a superbly controlled stage to preserve the advantage. It was local riders all the way today as the man in second place, Sebastian Halpern (Yamaha) rode maturely to take his second ever stage win 1'58 ahead of Tomas Maffei (Yamaha). Patronelli came in third and takes a 1:06'32 lead into tomorrow's penultimate stage.

Editor's note: After reaching the bivouac Kabirov was able to go on the record and explain how he lost time on today's stage, "I had a puncture and had to change a wheel, which cost me 15 minutes today. But there is still a battle with Chagin for victory, since there are two days left and a lot of miles to cover."