Toyota driver Nasser Al-Attiyah says the new regulations for the 2022 Dakar Rally have “made my life easier”, believing he now has a fair chance at a fourth career win.

The Qatari driver had been the most vocal critic of Dakar’s regulations in the past, particularly complaining about the apparent performance gulf between two-wheel drive buggies and 4x4 cars such as the Toyota Hilux.

After his defeat to X-raid Mini’s Stephane Peterhansel in last year’s event, he made it clear that he was “not interested” in returning to the rally unless the rules were changed to level the playing field.

But Al-Attiyah feels that Dakar organiser ASO and the FIA have finally struck the right balance in 2022, as he goes into the second half of the rally with a 50-minute lead over nearest challengers Yazeed Al Rajhi and Sebastien Loeb.

“The last six, seven years we were really struggling with the T1 car compared to the buggies,” he said. “Now we are equal and this makes my life easy and [allows me to] have a good lead.

“The regulation of the T1 and the buggies were not the same. But now I think we are equal. All the cars, the Audi, the Toyota, the BRX, [we have] the same size of tyres, same [suspension] travel, same technology.

“We asked for a long time. If we have this equal [technology] compared to the buggy, we can win the Dakar.

He added: “There is no [time to] relax in the Dakar. We need to be strong every day without any problem.

“It looks like our car is working very well everyday and I take care also about the car and not damage it. I'm quite happy to have this lead.”

Al-Attiyah laid the foundation to his healthy lead in the opening stage of the Dakar when he successfully found a controversial checkpoint that caught out several of his rivals.

Many drivers were quick to criticise the ASO after losing hours driving in the wrong direction, saying the roadbook did not provide clarity regarding the route they were supposed to take.

However, 2021 World Cross-Country Rallies champion Al-Attiyah says “it’s not our problem” that his rivals aren’t active outside the Dakar and are hence more prone to making navigational errors.

“We are doing too many rallies and the other people only come for Dakar, it's not our problem,” he said. “And Matthieu [Baumel] is one of the best co-drivers in the world in cross-country.

“Last year we had the same problem on Day 10 of Dakar, we got lost [for] 18 minutes and [as a result] we lost the Dakar. Sometimes it happens.

“You need to work, you need to develop yourself and your co-driver because if you are following some mark or some car, you will get lost. You need to stick to the roadbook in the car.” 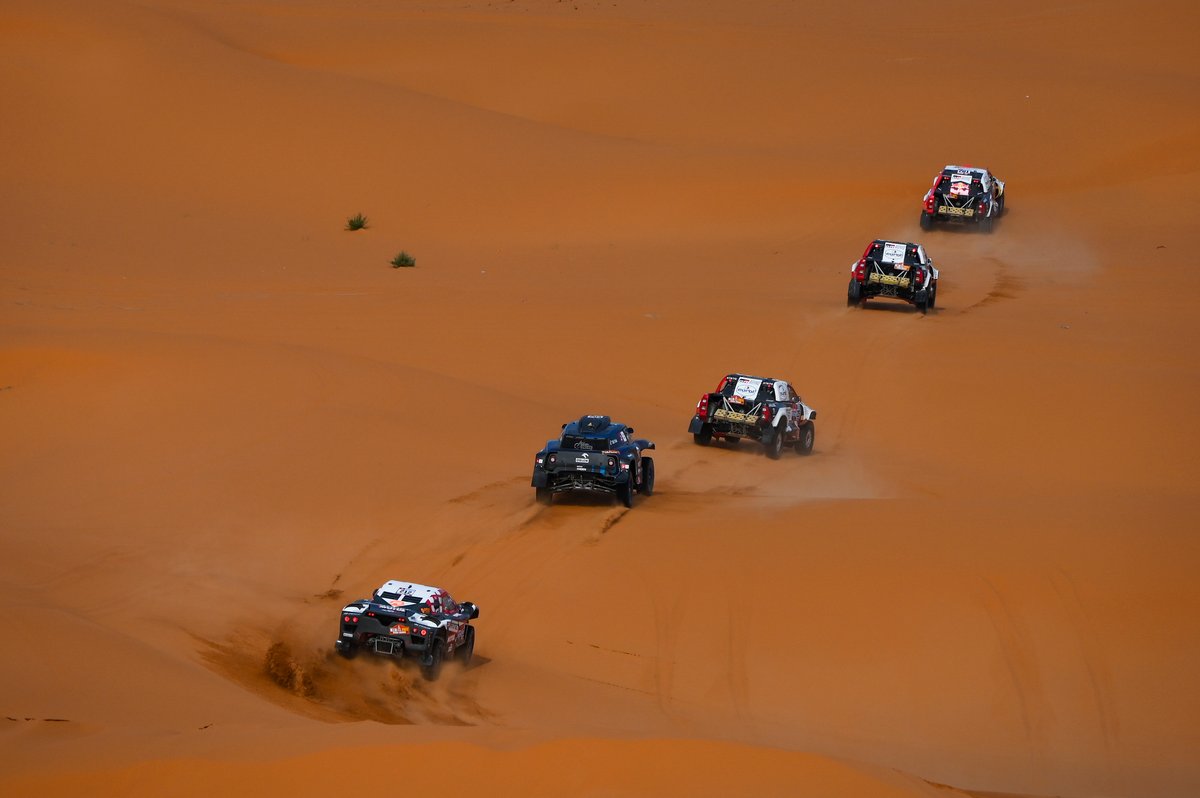 After Sainz lost two hours trying to find the correct waypoint, Sven Quandt - head of Audi’s Dakar partner Q Motorsport - implied in an interview to Spanish TV that Al-Attiyah knew something more about the stage than the rest of the field.

Although Quandt clarified his comments in a separate interview a few days later, Al-Attiyah says it was disrespectful of him to suggest that he had received outside assistance from ASO.

“Really I feel sorry for Carlos and Sven Quandt, this is not right to say that some driver got help from the organisation.

“It means last year and before last year when he [Sainz] was winning [with X-raid Mini], maybe he also got some help - we cannot say. We need to respect everything and this is what we need for the sport.

“Sven and Carlos sometimes go out of line. But for me if you go back three, four Dakars, [Sainz’s co-driver] Lucas [Cruz] always made a mistake. It's normal.

"I know Lucas. He needs to compete because he doesn't compete in any race [outside Dakar], [he goes] from Dakar to Dakar. Normally you can make mistakes.

“Lucas is also one of the best co-drivers but if you don't give him a chance to compete [regularly he will make mistakes].

“We won the last World Cup [rally] here in Ha'il in Saudi Arabia, [so] we knew what was coming in the Dakar. You need to come and compete, not stay at home and [go] from one Dakar to another Dakar.

“We are working very hard, we competed in four races and we won four races last year. It's not a joke.

“We try to work very hard and to win this race. And now with everything equal, here it makes the difference. I'm quite happy to have this technology but we need to respect the organisation."