Nicolas Cavigliasso capped off a near-perfect run in the 2019 Dakar Rally by winning the final stage and sealing the quad title in dominant fashion.

By:
David Gruz
Co-author:
Valentin Khorounzhiy
Listen to this article

With Sergey Karyakin and Ignacio Casale, quad champions of the past two years, moving to the SxS category, Cavigliasso, who was second and top rookie in 2018, became the favourite for the title.

Cavigliasso delivered on that promise, topping nine of the 10 stages - including the final 112 km run, which he led by 5m22s over Alexandre Giroud.

On four occasions, he was over 10 minutes faster than the rest of the pack, and even his smallest stage-winning margin was 3m55s, which enabled him to eventually take the crown by 1h55m37s.

Jeremias Gonzalez, who denied Cavigliasso the Stage 3 victory and was third on the final day, took the runner-up spot, having finished second in four stages.

He beat Gustavo Gallego, who completed an all-Argentinian top three, by 16m11s.

Yamaha once again dominated the category by locking out the entire top five, which was completed by Frenchman Giroud and another Argentine rider Manuel Andujar.

The best non-Yamahas were Kamil Wisniewski and Julio Estanguet on Can-Ams in sixth and eighth respectively, sandwiching Luis Barahona, the top rookie of 2019.

Carlos Alejandro and another rookie Emilio Choy rounded out the top 10 of the 15 finishers.

Francisco 'Chaleco' Lopez pulled off a comeback win in his first Dakar in the SxS utility vehicle category.
Lopez, who stood on the Dakar podium in the bike class in 2010 and 2013, made his return to the event aboard a Can-Am Maverick UTV after a four-year absence.

The Chilean first took the lead on the third stage, but then lost over an hour and a half to his rivals before the rest day due to a combination of mechanical and navigational issues.

But as all of the drivers again began to hit trouble, which included a spectacular roll for ex-quad winner Sergey Karyakin, Lopez strung together three consecutive stage wins to return to the summit of the class standings.

He then saw out the marathon to finish over an hour clear of his nearest rival, fellow ex-bike class podium finisher Gerard Farres.

Reigning champion Reinaldo Varela topped the two final stages but was just short of snatching the runner-up spot from Farres. 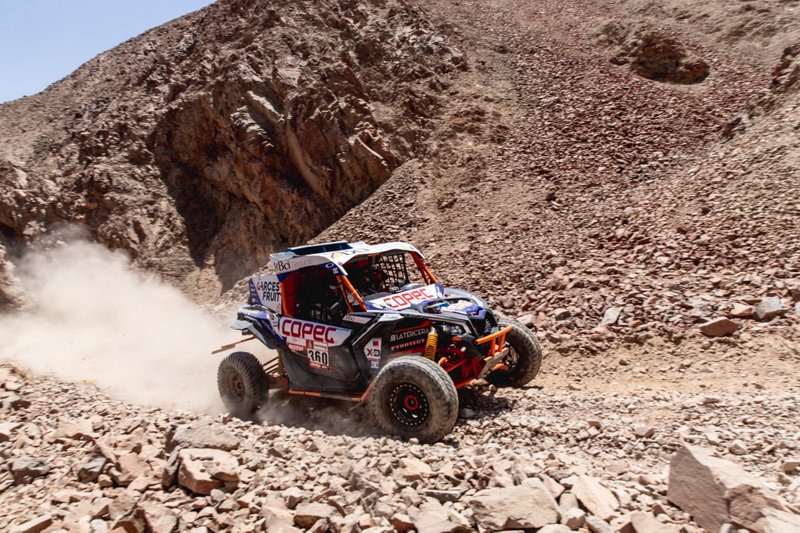