Through the rain the locals shine - Silk Way Rally 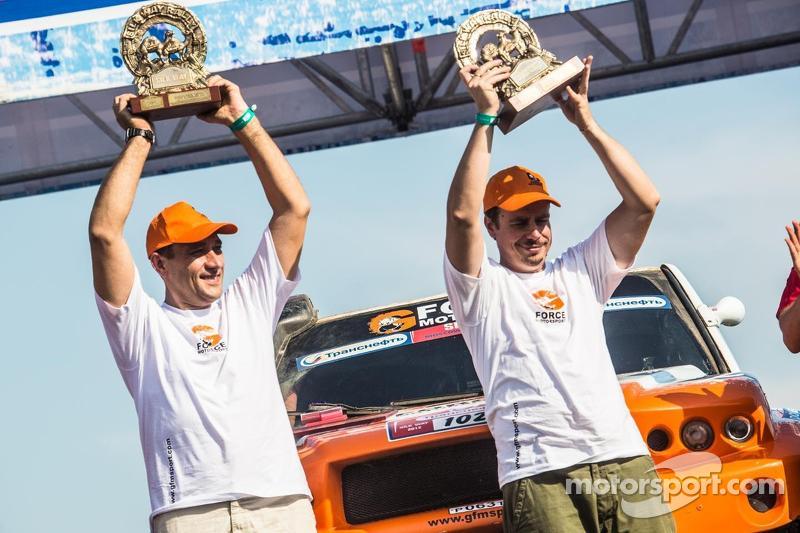 Moscow to Gelendzhik. Unless you have a Masters in Russian geography that might not mean too much to you. Yet if you are a rally-raid driver ready to take on the wilds of the Russian wilderness you know that it's the 3700km route of the 2012 Silk Way Rally, an event that has gone from strength to strength over the past few years.

For its fourth edition a grand total of 132 crews in car and truck categories lined up for the ceremonial start in Red Square ready for the 2083km of special sections that would take them to the Black Sea. But it wasn't on the ground that the story of the race was written, it was shaped by what fell from the skies. Maybe you heard on the international news about the devastating flash floods that struck the Krasnodor region killing some 170 people. Well, that was very close to the route of the rally and many sections were rendered impassable forcing the organizers to hastily cut whole sections out.

For one the most bizarre of reasons I've ever heard the X-Raid team pulled out at the last minute. Apparently they'd fitted the wrong air filter during testing and the ingested dust had damaged the engines. Well, when VW left the Dakar it opened the race up to one of the most enthralling battles we've seen in a long time, and the same happened to the Silk Way, with local hero Boris Gadasin / Dan Shchemel in their brutal G-Force Proto taking the first stage ahead of the legendary Jean-Louis Schlesser. 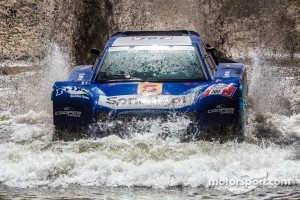 Jean-Louis Schlesser on the first stage

Gadasin's first Silk Way ended in a spectacular roll, 12 times end over end, the second time the engine blew, so this time, standing at the top of the leaderboard, he was hoping that his luck had changed. Other names in the Top 10 were the semi-works Toyota Overdrive teams of Lucio Alverez / Bernardo Graue and Jerome Pelichet / Xavier Panser, the friendly Germans Mattihas Kahle / Dr Thomas Schueneman in their stunning SAM Mercedes, ex-WRC star Tony Gardermiester tackling his first ever rally-raid and Dakar regulars (and ex-Enduro World Champion and Le Mans racer) Christian Levielle in his stunning Proto Dessoude and team mate Frederic Chavigny.

But the next day there was a shock. Rumours came in from the loop stage across the sandy savanna that Schlesser had crashed. I've been following rally-raid for a few years now and in all that time if there is a man who has never made a mistake it is the venerable Frenchman, but when the full story came in we learned that it was more of a freak accident than a mistake. The hood came loose so they stopped to take it off but couldn't because of the screws... so they carried on. But when it finally worked itself free it jammed one of the rear wheels and flipped the car over. It wasn't a hard crash as the fact that his co-driver driving it back to camp testified but two of Schlesser's fingers were deeply cut and he was flown straight to France for surgery. Everyone here at MarathonRally wishes him a quick recovery!

Another man seeming out of luck was Gadasin as fuel pump problems slowed him down so much that Lavielle took the stage win as well as the overall lead. Although, the undisputed hero of the day's 309km stage was Gadasin's team mate Vladimir Vasiliev. The first stage found him needing to wait for his T4 service truck yet even with starting in 95th place he still managed to take 2nd. “I passed more than 50 vehicles but I really liked today's tracks,” he smiled. 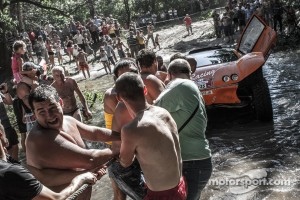 Some had an easier time than others

The torrential rains washed away parts of the third stage from Volgograd to Elista. So instead of 485km it was shortened to 375km, still a huge stage compared to any other event. The top teams from yesterday's test were unknowingly given a huge advantage... the cars and trucks are run together so the cars having to follow the leading KAMAZ and Ivecos had to pass through the mess that the 16 ton, 850bhp monsters on 50 inch tyres had made and there were a lot of people out with spades and tow ropes on the wide open grassland steppes!

One of those struggling was Gadasin who with a radiator full of mud had issues with over heating. Lavielle took his second straight victory to extend his lead while Vasiliev took another second, this time without having 50 mobile chicanes to navigate. And despite it only being his first full year behind the wheel of a full-blooded rally-raid car the Russian showed again what he is capable of by winning the 4th stage the massive 506km loop around Elista across the steppe and through the dunes. “I had fun. I am very happy with the stage victory and tomorrow I want to win again, so I will attack!” he said. And no one wins a 500km plus stage by accident. To deal with the constant surface changes and even weather changes that such a distance inevitably entails and be the quickest takes a skill that few posses. I have said it before over the last year – watch this guy in the near future!

With the final stage cancelled because it ran too close to the flooded disaster zone near Krasnodar the stage was set for the final showdown, a rain-shortened 348km to decide that race. Lavielle 12 minutes ahead seemed safe but Pelichet was only 3 minutes ahead of the determined Gadasin... and second was firmly in the sights of the determined G-Force team boss. But yet again cruel luck seemed to fall when he had to stop to change a break disk. “We lost about 20 minutes but incredibly all the time we were stopped we didn't see another car... so when we started again I gave it everything I could because I knew we had a chance to win!” 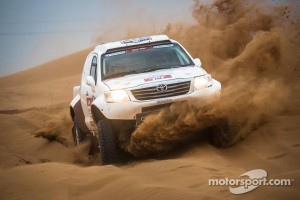 Jerome Pelichet in the dunes

Pelichet's race ended with a broken rear axle while Lavielle's demise came a little more painfully protracted when the air compressor bearing broke cutting the belt to the alternator. “We tried to keep going. We had 3 spare belts in the car but they all broke. To get to the finish we had to have the help of Thierry Magnaldi who charged out battery every 50km...” he shrugged at the end, obviously gutted.

And so Gadasin's luck finally changed for the better. I remember when a 2 euro fuel filter cost him the Baja World Cup and so the 2012 Silk Way was a very deserved win. I am sure that journalists should be impartial but G-Force really are the nicest team you can meet. In every camp I have been welcomed in, they've driven me into stages to take photos, taken me to dinner just so I can have time for an interview and their assistant-manager Marina is one of the sweetest girls I have ever met. So from me, well done to everyone at G-Force!

But although Gadasin might have been first through the final time control he was late getting on the podium. The organizers kept calling him up, but there was a delay. Some nerves were frayed but the reason was that Schlesser had just called him from Monaco to offer his congratulations. Message to the organizers; the champagne can wait when Jean-Louis is on the phone!

Second overall went to an equally delighted Balazs Szalay in his big Opel Antara who also won the last stage. “It was unexpected; I never thought it could end up this well. I have been waiting for a good result for such a long time. I am very pleased with this second place and with my first stage win!” said the jovial Hungarian.

Third went to the equally delighted Czech driver Miroslav Zapletal in his Hummer H3. “This is the third time I take part of the Silk Way Rally and I haven’t finished the last two times. It is a great deal for me to cross the finish line of this magnificent rally. The surprising result makes it more than fantastic.”

Highs and lows on the opening day of Pharaons Rally