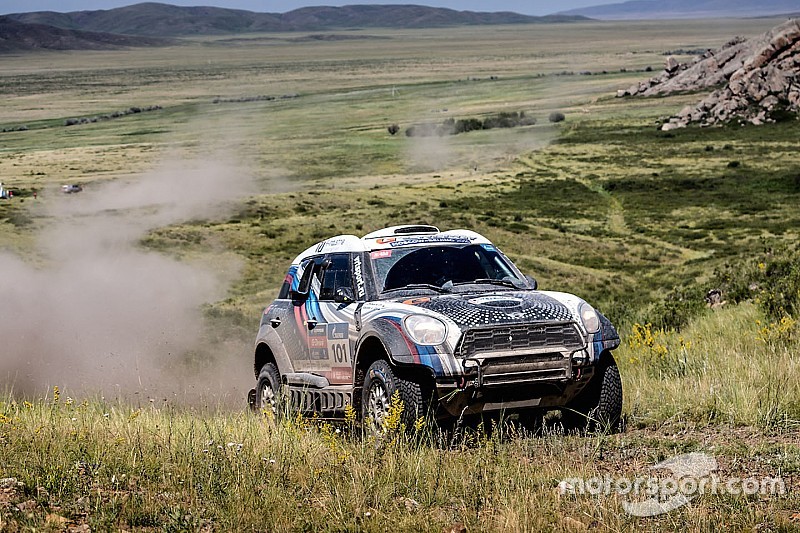 About 4,800 of the total of 10,774 kilometres have been covered what means that still more than 50 percent of the total distance of the Silk Way Rally is waiting for the competitors in the second week. So far, the five MINI ALL4 Racing pairings have delivered in very good style: with six days contested, the two Russians Vladimir Vasilyev and Konstantin Zhiltsov racing for Team VRT hold third position, followed by the pairings Yazeed Al-Rajhi (KSA) / Timo Gottschalk (GER) and Aidyn Rakhimbayev (KZA) / Anton Nikolaev (RUS).

The second Kazakh in a MINI ALL4 Racing, Bauyrzhan Issabayev and his Russian navigator Vladimir Demyanenko also made it to the top 10 and currently hold ninth place – while Harry Hunt (GBR) and Andreas Schulz (GER) will start from 12th position into the second week. Following tomorrow’s special stage, the rally will cross the border to China.

This year’s Silk Way Rally does not only feature sections that are challenging for both the drivers and the navigators but also a time schedule that is extremely exhausting for the competitors and the service. Limited sleep and long stages wear them out, physically and mentally. And the three-hour switch to another time zone after the border crossing to Kazakhstan, resulting in a clearly shorter night, gave many of those involved a really hard time. This applies particularly to the co-drivers who have to prepare the road book for the coming day after their arrival in the bivouac. “We haven’t got a lot of time for sleeping and the road book,” says Vasilyev’s co-driver Zhiltsov. “But we must prepare the road book properly and so, the rest has to step back. Three days ago I slept just two hours but yesterday some more hours. But we all were really tired and looked ahead to the rest day.”

Racing cars mustn’t start without helicopters in the air

Just as it was the case in the Dakar Rally, in January, rain represented a major problem for the organisers. The first stage after the prologue, for instance, had to be cancelled. The track partly was flooded and extremely slippery. And yesterday, the second part of the special stage had to be cancelled at short notice. Due to a thunderstorm at Almaty, the helicopters couldn’t take off and for safety reasons, racing cars mustn’t start without helicopters in the air. Furthermore, the mud the pairing’s had to cope with in several special stages made many drivers swear. In the fifth special stage, many crews hat to get out of their vehicles to clean their windscreens as the wipers were overstrained. And in the fourth special stage, Hunt lost nearly half an hour in a mud hole before he was towed out by an opponent.

Vasilyev had a good first week apart from the longest stage on day five where he lost a lot of time. Due to a damaged tyre in the opening stages his opponents could close in on him to then even pass him. So, the Russian had to eat a lot of dust behind the other cars and had to back off again and again, thus losing a lot of time. Al-Rajhi also lost a lot of time in this special stage. A total of three punctures forced him to stop several times. “These punctures certainly cost us 10 minutes,” the Saudi estimated. “Without these 10 minutes and the overheated engine on the previous day we would be among the front-runners.”

Meanwhile, the two Kazakhs Rakhimbayev and Issabayev surprised with many good and consistent performances that took them both to the top 10. Rakhimbayev gained a lot of time when securing the very fine third place in the fifth and longest special stage. “We get going better and better day by day,” said the Kazakh, “The last few days were exhausting but we got through well. I hope the days in China will be long and demanding as this suits us well.”

The Gobi Desert is waiting...

Nonetheless, all the competitors have a lot of respect for the second week that will take them across China. There, the Gobi Desert is waiting for them with dunes and sand. “Most of us don’t know the dunes in China and I heard that they are really high and not easy to drive on,” reveals Zhiltsov. “Anything can happen and change, there.” Young Briton Hunt is of the same opinion: “The second part of the rally definitely will be the more interesting one.

In China you can both gain and lose a lot of time.” Following all the bad luck encountered in the past days, Al-Rajhi hopes to there be able to push and work his way up to the front end of the field. “I hope that we have had our dose of bad luck and will be able to contest the second week without having to cope with more problems. The second part will be tough with several surprises – hopefully more of them for the other vehicles than for us.”

Tomorrow’s route will take the field from Almaty, Kazakhstan, to Bortala, China. Before crossing the border, the pairings will have to contest a 76.86-kilometre special stage in the mountains. Held in a height between 2,000 and 2,600 metres above sea level. A technically demanding stage, offering virtually no overtaking possibilities.