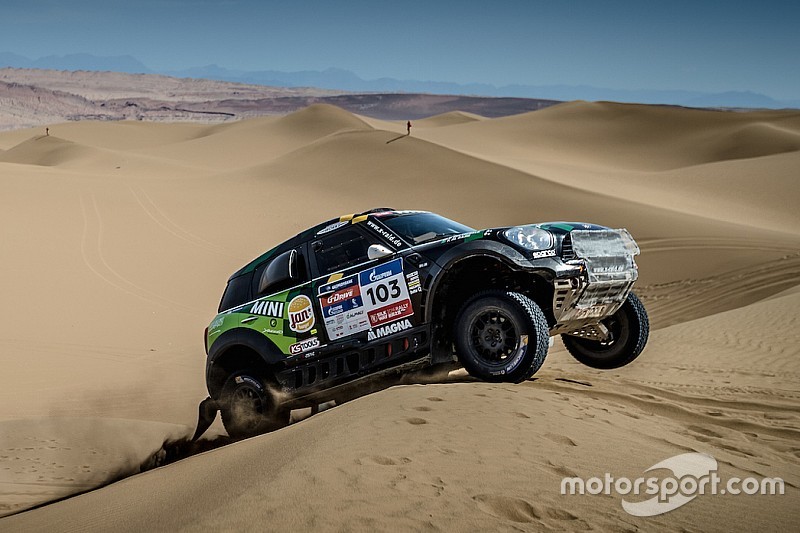 Five MINI ALL4 Racing inside top eight. Today’s Stage 11 cancelled due to sandstorm.

Munich. Hot and dusty racing continues to cause problems for competitors in Chinese territory as the Silk way Rally progresses east across the Gansu desert region.

Tuesday’s Stage 10 (19-07-2016) was the last day an official stage result was given because today’s 609.66 km Stage 11 had to be cancelled. Support aircraft were grounded due to a sandstorm in the region.

The Silk Way Rally entourage and frustrated car and truck competitors then had to make their way in convoy to the Jiayuguan bivouac in preparation for tomorrow’s Stage 12.

Stage 10’s 525.24 km route proved to be a good one for Harry Hunt (GB) and Andreas Schulz (GER) in MINI ALL4 Racing #105. They completed this stage in third place to position them third overall.

“It was a good clean stage with no real problem. I’m happy,” said Hunt. It was quite bumpy in the middle and my neck and arm are still quite bad. But it was fast and so the heat didn’t really cause a problem even though it was still 45-degrees. I didn’t think we would get to our present position after getting stuck in the first, second proper stages. There are still some big days to go so... who knows?”

Al Rajhi: “It was a good track even though it was very bumpy and, at 190 km exactly, we lost the power steering. But we made it ok to drive the last kilometres, and finally we do it well and not lose too much time, maybe three or four minutes.”

MINI ALL4 Racing #103 of Russian pairing Vladimir Vasilyev and Konstantin Zhiltsov (X-raid Team) are relentless in their consistent pace and retain fourth overall after completing Stage 10 in sixth.

Weather conditions allowing, Stage 12 will see the MINI ALL4 Racing crews taking part in the longest stage of the Chinese route. A total of 666.92 km will cover many dunes and sand sections before moving lower into the valley area and onto hard-packed terrain.