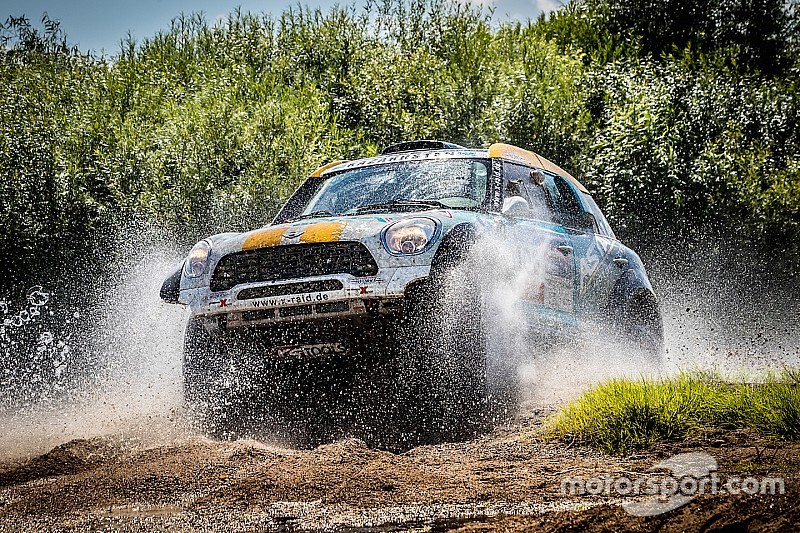 Four of the five MINI ALL4 Racing family inside leading top ten.

Today’s Leg 3 of the Silk Way Rally signalled the start of demanding long distance cross-country rally driving. After the short but spectacular Special Stage of Leg 1, the five MINI ALL4 Racing crews were keen to show what they and their MINI ALL4 Racing were capable of from the start of Leg 2 (10-07-2016).

Unfortunately, the previous days of rain had caused many of the route tracks to flood. With the threat of yet more violent storms forcing the support helicopters to remain grounded, the Silk Way Rally organising team reluctantly had to cancel Leg 2 and the competitors drove orderly to Ufa for today’s start of Leg 3.

Leg 3 saw some fast driving across mostly gravel tracks and resulted in the MINI ALL4 racing #103 of Yazeed Al Rajhi (KSA) and Timo Gottschalk (GER) completing the section in second position.

Al Rajhi: “For me everything was ok. After 20k we caught another car and unfortunately we had to follow in his dust for quite a long distance. It was a nice stage and we had a chance to make better time, but second is a good place to start tomorrow. I have a very good co-driver and he made the stage very easy for us.”

Also pushing hard, but in a safe and secure manner, the MINI ALL4 Racing duo of Vladimir Vasilyev (RUS) and Konstantin Zhiltsov (RUS) netted a solid fourth place after 815.15km of driving – 271.63km of which consisted of a Special Stage.

The MINI ALL4 Racing #106 of Aidyn Rakhimbayev (KAZ) and Anton Nikolaev (RUS) completed Leg 3 in sixth place and are now sixth overall. Talking about Leg 3, Rakhimbayev said: “It was very twisty and narrow. One time we jumped and hit something with the front of the car. We stopped to check everything, but the car was fine and we went on. Of course, we lost some minutes but that’s okay. I am still gaining experience!”

Harry Hunt (GB) and Andreas Schulz (GER) in the MINI ALL4 Racing #105 didn’t fare so well today, completing Leg 3 in ninth position. “It was quite a hard stage for us,” said Hunt. “I didn’t find it very easy at all. There were a lot of tracks through the grass so it was quite hard to see ahead and then we hit a water splash. Then we got lost a little bit. And then again. But we are here and looking forward to tomorrow.”

Bauyrzhan Issabayev (KAZ) and Vladimir Demyanenko (RUS) in the MINI ALL4 Racing #109 passed Leg 3’s finish point in 11th. In the overall standings, Issabayev has moved up one place from 12th after Leg 1 to 11th – hopefully a top ten placing is on the cards after tomorrow’s Leg 4: Kostanay to Astana.

The Silk Way Rally has now moved further east from Russia to Kazakhstan. This shift in route will also bring with it a change in “rally time”. Until today “rally time” was GTM +3. In the evening the time will change to GTM +6 making the overnight stopover and sleep time, for all concerned, very short.