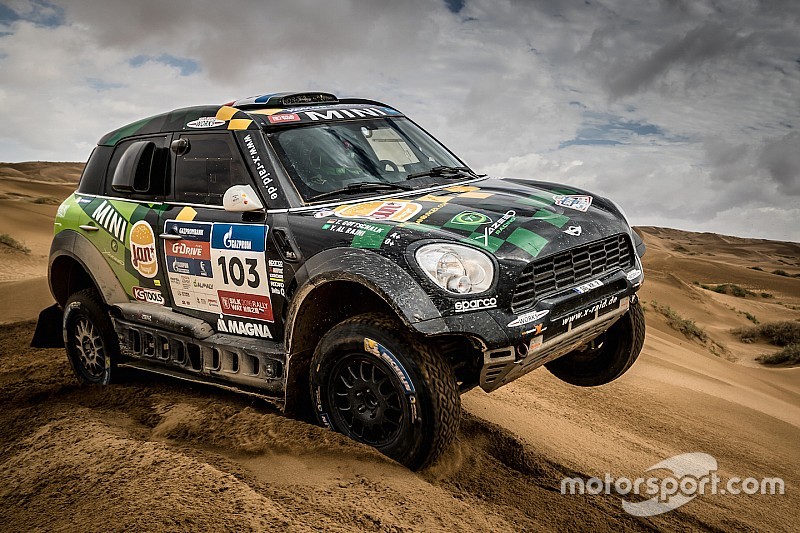 Munich - Stage 14 of the gruelling Silk Way Rally brought a well-earned victory for the MINI ALL4 Racing team. Yazeed Al Rajhi (KSA) and Timo Gottschalk (GER) piloted the #103 vehicle across the finish line in first position to maintain their second place position in the overall standings.

The penultimate Stage of the 2016 Silk Way Rally saw the MINI ALL4 Racing crews complete the Wuhai-Hohhot route. The 754km leg was mainly sandy terrain with fast tracks, but the dunes towards the end of the route were a challenge for even the most experienced drivers.

I’m so happy to have achieved fourth in the Silk Way Rally – I’m over the moon and couldn’t have hoped for anything more,

Speaking after their Stage 14 victory, Al Rahji said: “The Silk Way has been a good rally – we’ve improved a lot and have learnt a lot of different roads. The car is strong and performed well, that’s the most important thing. It has been a very hard rally and some of the stages were very tough. But, I’d definitely like to come back!”

“It’s been a hard rally with some difficult navigation,” added Gottschalk. “The Silk Way has some very demanding stages, and compared with the Dakar, it is a very big adventure. I expected that there would be some long days for sure, but I didn’t expect the stages to be so hard.”

Meanwhile, the MINI ALL4 Racing crew of Harry Hunt (GB) and Andreas Schulz (GER) brought their #105 across the line in third place. The result has enabled them to retain their fourth position in the overall standings.

“I’m so happy to have achieved fourth in the Silk Way Rally – I’m over the moon and couldn’t have hoped for anything more,” said Hunt. “It’s a great rally but it was a lot harder than I expected and I personally found it harder than the Dakar. The stages were longer, the liaisons were longer and the days were longer. The heat was difficult to cope with but some of the scenery was fantastic!”

The Russian duo of Vladimir Vasilyev and Konstantin Zhiltsov (X-raid Team) completed Stage 14 in fourth place and were the third MINI ALL4 Racing team home today. Their result means they maintain third spot in the standings overall.

“The Silk Way has been a good rally,” said Zhiltsov. “Today was a good race, not too difficult, although the dunes section was tricky.”

Rakhimbayev said: “I’m happy and pleased with my achievements. I enjoyed contesting the Silk Way Rally, it was an interesting challenge.”