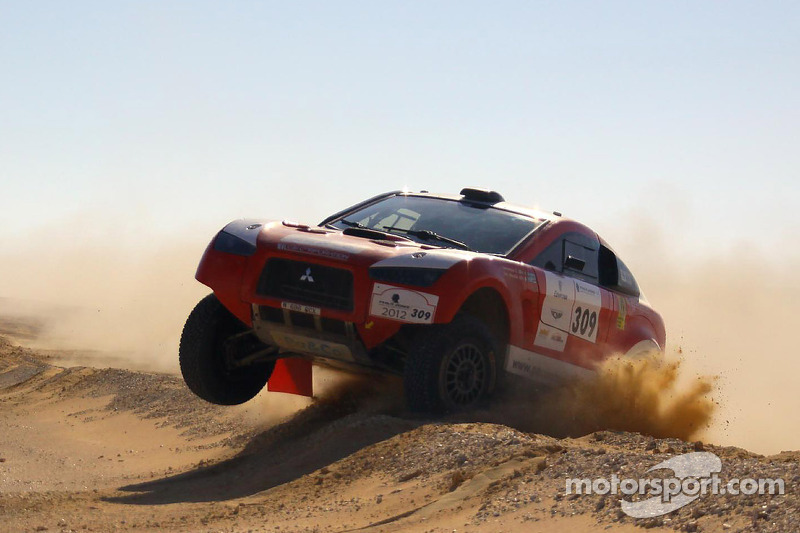 The organisers said that the hardest stage was over and that today's would be the most beautiful. “Pretty?” Jean-Louis Schlesser scoffed. “It was too hard to be pretty. Much harder even than yesterday!” And Kalifa Al-Mutaiwei would probably agree if he was in the mood to talk.

When Jean-Louis got out of the car next to his service barge he looked as relaxed as though he'd just popped to the shops... not just blasted through the searing desert for 500km. “We went very flat out and caught Al-Mutaiwei quite soon. I don't know what happened but my co-driver Konstantin (Zhiltzov) thinks that he was going too fast and got the nose of his car in the sand. We passed him and never saw him again.”

I was sitting with Costel Casuneanu when Al-Mutaiwei's co-driver Andreas Schultz came over to chat and he explained what happened. “We didn't do much wrong because when you can't see how the sand is in front of you, you can't really make a decision what do, where to go. We could feel that it was getting softer and softer and that the power was getting less and less and we drifted to the left and got stuck... Jean-Louis went to the right and carried on. And getting out took 25 minutes.”

Al-Mutaiwei's struggles mean that the tables have turned and Schlesser now has an 8 minute lead heading into the final 2 days... but on the grapevine there is a controversy about many drivers being late to check into the start of the second part of the start.

“So were we!” Costel said. “We got stopped by the army and they said that the colonel wants to talk to us. It was an honour of course, but we were 3 minutes late at the check-in. We explained to the marshal that they had big guns and everything...”

(Costel's father will be reading this, so I'd just like to say that your son is a little rough from being bounced around in the car for 500km but he's eating a nice stir fry so his team is looking after him!)

Making it a French 1-2 at the top of the timesheets today was Patrick Sireyjol and his co-driver Francis-Xavier Beguine had a few minutes to tell me their story. “It was a very beautiful stage and really nice navigation and when everything is good; the car, the team and the track then it is never difficult... but 15km from the end on a very fast route we started to hear some bad noises from the transmission, so we have to look at that...”

4th today was G-Force's Boris Gadasin and I found his new co-driver Alexey Kuzmich to talk to. You might recognise the name from the Dakar... he stood on the truck class podium after guiding Artur Ardavichus to 3rd overall in their KAMAZ. “It was really hard today and really long. For me the navigation was OK apart from near the start where there were many rocks in the way and many tracks through them so it was hard to follow the roadbook. Then just after one of the check points there was a long, high dune with soft sand, so soft that it was almost fesh-fesh. It took us 3 times with the sand tracks to get up and it cost us 12 minutes.” Alexey will also be in the same co-driver's seat when the G-Force team takes on the mighty Dakar next January.

The T2 class for production cars is still being headed by the giant-killing Jun Mitsuhashi in his 200 Series Toyota Land Cruiser although he had a bad day today. “We got a hole in the radiator,” he explained. “It happened to us in last year's Dakar as well and because of this I carry spare water with us. The good news is that now we know why it happens... It seems that the fan can knock stones so hard that it can smash them through the casing. Also when we were stopped we saw a bike rider fall really heavily close to us. I had to call the helicopter for him and were there for about an hour... the good news is that he will be OK and the time we stayed with him will get given back later so we're not as far back on the timesheets as it looks right now.”

He also let me look around his car and I was actually really amazed at how standard it really is. When his name is so high up on the leaderboard I can't help thinking it has something to do with it not being much of a Toyota under the skin... but actually apart from the suspension it is... and after seeing all of the factory made parts I now have a lot more admiration for Mitsuhashi as a driver!

Also not having such a wonderful experience in the rally's prettiest stage were the furthest travelled team. Brazil is more known for it's forests than its dune-filed deserts so Reinaldo Varela Marques and Gustavo Gugelmin Souza are at a bit of a disadvantage against their T2 World Cup rivals Yahya Al Helei and Khalid Alkendi from the UAE... even though this is Marques's 314 or 315th race. “He can't quite remember how many,” says co-driver Souza. “But 15 is better number than 14! He used to drive in the WRC in 2000 and did the Dakar 3 times.

“Now we are fighting to win the T2 championship, but we got disqualified from our win in Poland so we're 13 points behind rather than 13 in front. We were doing OK so far. We were a bit unlucky to get stuck a couple of times but today we got to a top of a dune and saw all of our competitors stuck at the bottom. So we stopped, let the tyres down a bit and worked out which was the best way for us to go... and then the car wouldn't start. But it could be worse, we are still in 3rd, just behind Al Helei. And if the fight goes to Portugal then it will be us with the advantage.”

Last year Ukrainian Sixt Team driver Vadim Nesterchuk finished an amazing 2nd overall and this year came back with high hopes in their new 200 series Land Cruiser, but the car is strapped firmly to the trailer as it broke its 2nd gearbox in 2 days... and they don't have a 3rd one with them...

With his usual smile Miroslav Zapletal also enjoyed today's stage. “It was very nice. The sun was shining and the sky was blue,” he joked. “We went not too fast, not too slow... no risk. We were following Mitsuhashi and Costel over the dunes, sometimes we saw them, sometimes we didn't, it was really nice and I am really impressed with how my co-driver did today... so he is good, the car is good, it's just a pity about the driver,” he laughed.

A rather unusual team combination is the 4 Kazakhstani drivers with the British RallyRaid.co.uk team. “Communication with each other is not so much of a bother, especially as the nice Astana team come over to help if there's something we can't understand, it's the car that we can't work out. For three days as soon as the engine temperature gets to 100 degrees the engine switches to some kind of 'safe-mode' which doesn't give enough torque to get up the dunes. All the guys can do is stop and wait for the water to get back down to 80 and then they can go a bit further. It's costing them a lot of time in the stages and so far has cost us mechanics 3 nights of sleep... but we might have a cunning plan to fix it... We'll see later!”

I would like to say thank you to my friend Marian Chytka for todays photos.

Schlesser excluded from the Pharaons Rally