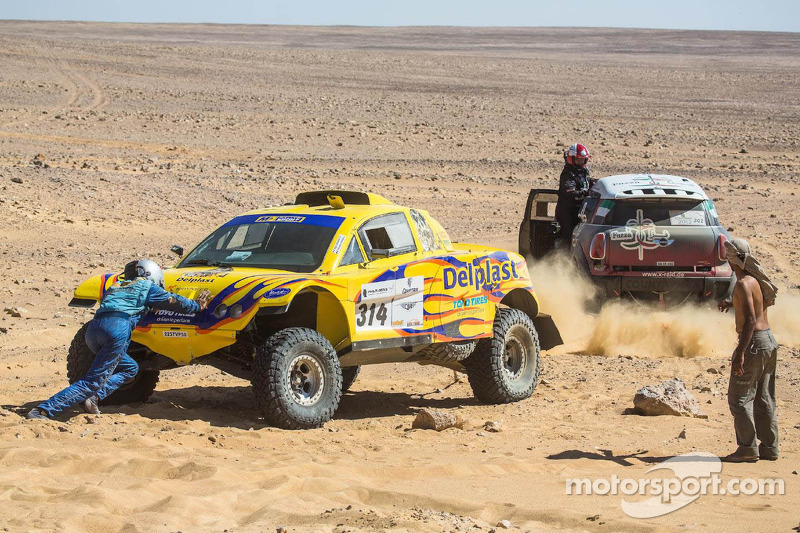 A day of firsts…

Scoring their first stage wins of the 2012 Pharaons rally were Jakub Przygonski (KTM) among the bikes, and Miroslav Zapletal-Manciej Marton (H3 Evo) in the car category. Both of them were hoping to win at least one of the six stages, and today, finally, it was mission accomplished! 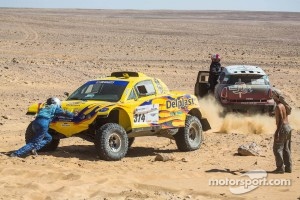 Today Joan Barreda found a rider that was faster than him. The leader in the overall standings wasn’t pushing flat out for the stage win, and was more than happy to manage his lead and, more importantly, hone his navigating skills.

Indeed, during this fifth stage it was very difficult for everyone to find their way, with many navigational errors being committed. The most glaring of them involved Paolo Goncalves, who lost what seemed like an eternity, 1h16’ to the stage winner Jakub Przygonski.

The result allowed the Polish rider to regain his smile, as he continues his pursuit of Barreda and the Husqvarna: “The start of the stage was fairly easy, while the final 200 kilometers were very demanding. There were stones, fesh-fesh, and I had to blaze the trail. I wanted to win, and I did it! I’m extra happy because it was stage with tricky navigation. What’s more, it could allow me to keep third place in the world championship, but we’ll wait for tomorrow for that.”

So we have one happy winner, and one relaxed Joan Barreda in the bivouac after a refreshing shower. Perhaps most content of all, however, was Bolivian rider Carlos Salvatierra, who finished the stage in fourth place. “I’ve run a good rally thus far. I’ve ridden well every day, but today was fantastic. When I arrived at the refueling point, I was in the lead! I lost a little time in the second part of the stage, but riding together with Barreda was an incredible experience.”

Pal Ullevalseter got started again this morning after changing the gearbox on his KTM: “I finished 1’35” from Jakub, which isn’t bad! I lost a little time over the jumps in the fesh-fesh, and I need a little more training; I hadn’t raced since the Dakar, and I need to be ready for the next one.”

Jordi Viladoms finished the day in fifth position, still suffering from pain in his ribs: “I caught up to Salvatierra, who was riding with a good pace, and I managed to stay behind him. I still haven’t fully recovered from the other day’s crash, so I am riding with caution. When I started to push a little harder the pain returned, but today I gained a position in the overall standings.”

Joan Barreda retains his advantage in the overall standings, heading into the final stage with a lead of 17'32'' on Jakub Przygonski and 1h06' over Jordi Viladoms. Tomorrow’s stage will conclude at the scenic Giza Pyramids.

Among the quad riders, it was a very difficult day for Camelia Liparoti, who got lost in the desert: “I was overcome with panic. I made some mistakes out in the middle of nowhere, and I lost my head.”

Miroslav Zapletal from out of nowhere...

Régis Delahaye was on his way to concluding a fantastic stage, and heading into the final two kilometers he held a lead of roughly fifteen minutes over the Mini All4 Racing of Khalifa Al-Mutawei/Andreas Schulz.

Then, just when it was in sight of the finish line, the French team encountered a nightmare scenario: both of their axles broke simultaneously! Khalifa stopped to make sure that everyone was ok, while the Toyoya of Jun Mitsuhashi towed the Frenchman’s MD Racing buggy across the line.

This situation allowed Mirsolav Zapletal and Maciej Marton to realize the dream of their first stage win in the rally: “I started off poorly today, because I drove an extra 40 kilometers at the start of the special stage. When I rejoined the right track, I found myself faced with the Mini of Al Mutaiwei... then I just followed him.”

Another team satisfied with their performance was that of Aidyn Rakhimbayev/Gaboulla Ashimov (Désert Warrior), second on the stage thanks to their impeccable navigating.

Boris Gadasin (G-Force) was the victim of a water pump problem, and therefore lost fourth place in the overall standings. But losing the most today was the team of Costel Casuneanu/Maurilio Zani, leaders of the Dakar Challenge up until yesterday. Their Mitsubishi flipped over forwards, and the incident allowed the Egyptian pairing of Tarek El Erian/Aly Mohamed (Buggy) to inherit the lead of the special classification.