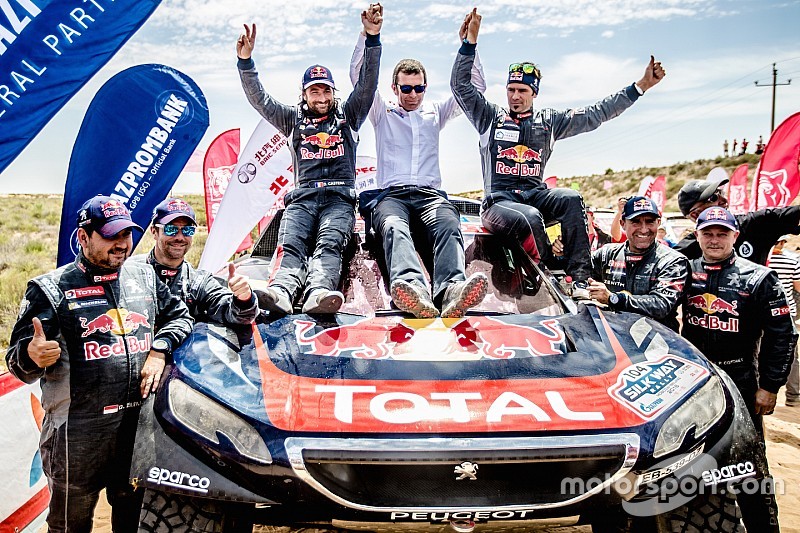 The French manufacturers' cars controlled most of the marathon, with Despres taking over in the lead for good after stablemate Stephane Peterhansel rolled on Stage 5.

Despres would subsequently come under pressure from his other Peugeot teammate Sebastien Loeb, but the nine-time WRC champion was on the receiving end of a hefty penalty for missing two waypoints during Stage 12.

As such, the five-time Dakar bike class winner was left to coast to the finish line in the two remaining timed sections, ending up 26 minutes clear of Mini driver Yazeed Al-Rajhi at the end of the rally.

After completing Stage 14, Despres revealed that he had lost power in his car 30km from the finish line - only for Stephane Peterhansel's co-driver Jean-Paul Cottret to fix the issue.

Despres recalled: "We had a bit of a stressful moment. I said to myself, like [Toyota driver Kazuki] Nakajima at the 24 Hours of Le Mans: ‘I have no power!'

"We opened the bonnet and happily, Jean-Paul Cottret arrived and immediately found the problem. This was another example of teamwork. It is easier to win when you are surrounded by the best!

"While I still have a lot to learn, this 2016 Silk Way Rally has helped me to make an important step forward in this new chapter of my racing career."

Vladimir Vasilyev completed the podium, making it two Mini cars in the top three , as Loeb recovered to P7 and Peterhansel ended up P15.

The Trucks race ended with a 1-2 for Russian manufacturer Kamaz, although the marque had to withstand a serious challenge from the Renault of Martin van den Brink.

Having wrestled the lead away from the Kamaz crews after the rest day, van den Brink saw his victory bid fall apart through Stages 12 and 13, as he lost a lot of time due to a puncture and mechanical issues.

As such, 2015 Dakar Rally winner Ayrat Mardeev and Dmitry Sotnikov both surpassed the Dutchman, the former going on to win by 15 minutes.