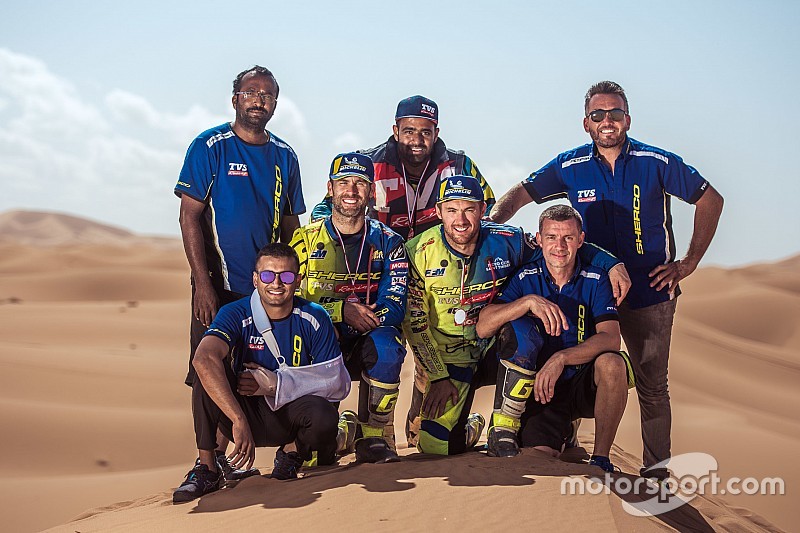 Sherco TVS recorded its second win in the annual PanAfrica rally, with Michael Metge claiming the top spot for the Indo-French outfit.

Metge trailed brother and teammate Adrien after the first leg, but surged ahead on Day 2 and was unchallengeable thereafter, eventually winning the rally by 43m14s.

After losing out to Michael, Adrien Metge also dropped behind Mario Patrao in the fourth leg, finishing 2m41s behind the Portuguese rider in the final classifications. However, his third place result was enough to secure a double podium finish for TVS.

Meanwhile, two-time Raid de Himalaya winner Abdul Wahid Tanveer put on an impressive result on his first international outing of 2018, finishing eighth in the overall rankings. He also scored a class win in the Enduro class.

The only disappointment for Sherco TVS came in the first leg when Aravind KP, one of the only two Indian riders to have taken part in Dakar, crashed out of the event.

Elsewhere, Ashish Raorane made a successful PanAfrica rally debut on a customer KTM 450 bike, finishing 19th in the classifications.

PanAfrica is an annual cross-country rally that takes place in the dunes of Morocco and is considered as one of the best training grounds for Dakar. This year’s edition ran for nearly 1400 km, spread across five days.