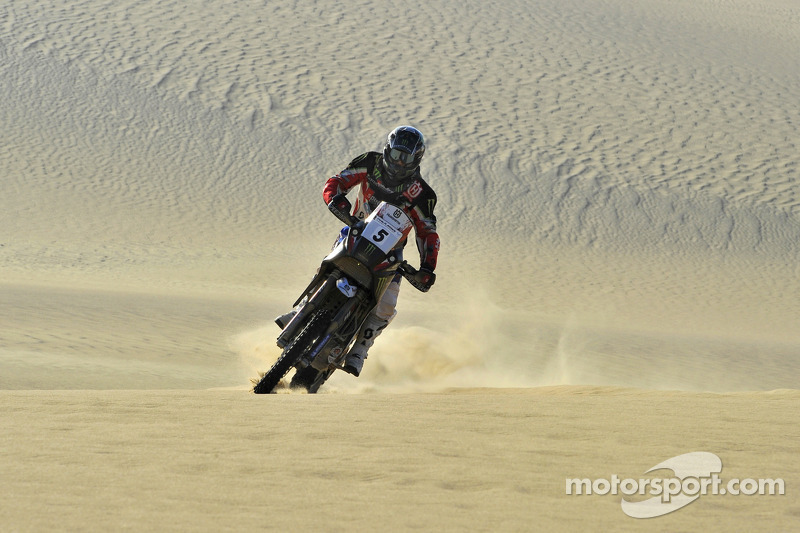 After spending the last week in the desert, the “survivors” of the fifteenth edition of the Pharaons Rally finally reached the Giza Pyramids to receive their just rewards for six days of hard work. 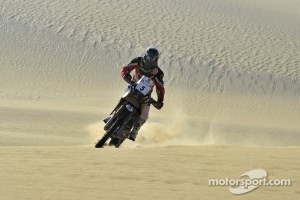 Among the bike riders, it was Spaniard Joan Barreda taking the top honors on his Husqvarna and, in the cars category, it was Khalifa Al-Mutawei/Andreas Schulz (Mini All 4) being received by the Egyptian dignitaries to celebrate their first win in this rally. And it was a rally that more than lived up to its promises: sportsmanship, a friendly atmosphere, wondrous stages, a precise road-book and an exciting race to the end in both categories; bikes/quads and cars.

At 29 years of age, Joan Barreda has achieved the first important victory in his young rally career (two years long), riding the new Husqvarna developed for the Dakar. He now looks like the natural heir to countryman and 2012 World Champion Marc Coma’s (absent from this year’s Pharaons) throne in the coming years.

For Joan Barreda, always focused, careful and reserved, this victory is just what he needed with two months remaining until the Dakar, reassuring his good chances for success.

Instead it was a solid second place finish for Jakub Przygonski, who rode quite consistently (one stage win), but slightly slower than his Husqvarna mounted rivals. The result allows the Polish rider to finish the World Championship in third place, the same result he achieved last year.

With regard to Jordi Viladoms, his third stage crash kept him from achieving the type of result he had hoped for. Engine problems and pain in his ribs were, however, compensated for by a second place finish in the World Championship, and ready to great him at the finish was his friend Alessandro Botturi from Team Bordone Ferrari, who just arrived in Egypt today.

It was an in house battle among the quad racers: Lukasz Laskawiec edged out Rafal Sonik (both on Yamahas) for the overall win. The “princess of the desert,” Camelia Liparoti, finished on the third step of the podium. “It was a great rally, one of the best since I have been coming to Egypt. In five races, I have finished on the podium four times!” 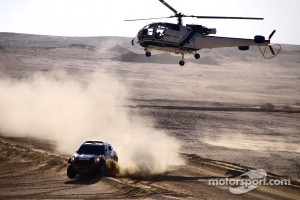 Auto: Al-Mutawei and Schulz on top!

Winning both the rally and the 2012 World Cup, the Pharaons was exceptional for Khalifa Al-Mutawei and Andreas Schulz. Driving a Mini All4 Racing for X-raid, the driver from the Emirates reached all of his objectives this week. The victory uncertain until the disqualification of Jean Louis Schlesser for an irregular air intake, the result was then sealed thanks to an insurmountable lead over the rest of the field. Two stage wins (the first and the third) versus one for Schlesser, one for Patrick Sireyjol, one for Miroslav Zapleta and, finally, the last stage won by Frenchman Regis Delahaye, was the total for his week. Six very intense days during which all of the drivers held nothing back.

Boris Gadasin was particularly unlucky, along with his G-Force teammate Vladimyr Vaslyev, as both were forced to retire from the race. On the other hand it was a solid performance from the French contingent, particularly Régis Delahaye who overcame mechanical problems just 800 meters from the stage four finish, and a one-hour penalty for losing his time card. The MD Buggy nevertheless maintained second place in the standings, with a 14 minute lead over third place finishers Miroslav Zapleta/Maciej Marton, and 16 minutes over the fourth placed team of Patrick Sireyjol-François Beguin.

Two of the three Team Dessoude cars managed to finish the rally: the Cinotto family experienced quite an adventure, as did Michele (the father) who was lost for four hours in the Egyptian desert. He still managed to finish in 13th place behind the wheel of his Junke Buggy, while his son Piero drove his Nissan Pathfinder to 18th.

Jun Mitsuhashi and Alain Guehennec made up for their 2011 disappointment (retiring on the final stage) by winning the T2 category this time around. They beat out Nicolas Gibon-Akira Miura, also in a Toyota, giving the Japanese manufacturer an impressive double.

It has never been done before: the winner of the Dakar Challenge, the Egyptian team of Tarek El Erian-Aly Mohamed in the Batmobile Buggy Cotel, has secured an entry into next season’s Dakar. “It’s the best we could have hoped for,” said Daniele Cotto. “A young Egyptian driver, who is also a friendly a kind person; he really deserved to achieve this dream.” Xavier Gavory, head of competitor relations for ASO, greeted the team at the Pyramids, and they will be the first Egyptians to participate in a South American Dakar.

Joan Barreda (HVA) winner: “I am really happy with this week in Egypt. All of the stages were difficult, and I’m very satisfied with the work done by the team, whom I would like to thank. It is my first win in World Championship race, following on from July’s victory in the Baja of Spain.”

Jakub Przygonski (KTM), second place overall: “After the mistake from Goncalves, the podium places were essentially locked up. I gave my best in the final special, after having ridden with Barreda and seeing that he wasn’t always consistent on the route. Second here and third in the World Championship, it has been a satisfying week, despite a few too many navigation errors.”

Jordi Viladoms (KTM-Bordone Ferrari), third: “It was a difficult rally for me personally, between physical problems and issues with the bike. After the crash I just tried to hold on until the finish, as my World Championship position was in play…”

Paulo Gonçalves (HVA), fouth: “I don’t have any regrets with regard to my riding, but I made some big navigation mistakes. But it’s something I will learn from, and I was always there to liven up the race along with Joan. Two double stage wins with Barreda, and one individual stage win, mean a lot for the factory. Unfortunately I lost second place in the World Championship.”

Khalifa Al-Mutawei (Mini All4 Racing), winner: “It was a very positive result, and a great rally with excellent organization. We raced over varied terrain, like we will find in Perù. The disqualification of Schlesser certainly made our victory easier, but we will still attend the final round in Portugal with the new Mini.”

Régis Delahaye (Buggy MD Racing), second: “We ran a great Rally, carrying out a lot of testing here in Egypt. The victory didn’t come, but at least we got some satisfaction by winning the final special stage. I gave it my best in today’s stage, and I’m satisfied with the evolution of the buggy, even if it still struggles on uneven terrain.”

Jun Mitsuhashi (Toyota), winner T2: “Overall it was a satisfying week. We had just one mechanical problem, with the radiator, and nothing else. I’d say that we are ready for the Dakar.”