Ghosts Of The Tsar - Olibiya Rally Of Tunisia Report

Two years ago this rally was the scene of the worst accident of Leonid Novitsky’s career, when he barrel-rolled his car for nearly 200 meters, badly hurting his arm and hand. Still weakened, the injury knocked him out of this year's Dakar. There was no weakness in his driving this year though and from 2nd place in last month's Abu Dhabi Desert Challenge he went one place better in his X-Raid BMW X3CC to win, 14 minutes clear of an equally satisfied Jean-Louis Schlesser in his Sonagol Buggy.

“It was hard,” Novitsky said with a smile as he clutched the winner's trophy for the first time here... And that's where some reports leave it... But this is Motorsport.com and it's our passion to make the extra effort to bring you closer to the action...

The human body has an amazing ability to adapt to its environment and the desert is and will always be one of the harshest environments on the planet. Everything about it is extreme; the heat, it's vastness and it's unrelenting changes of texture and surfaces. Here only heroes come to race, men trained over years to the limit of speed and endurance in machines designed and built with money as no object, made to withstand the roughest conditions... and the Olibiya Rally is one of the toughest, designed to push both man and machine to the limit, and with 1550 competitive kilometers, is second in length only to the fabled Dakar. 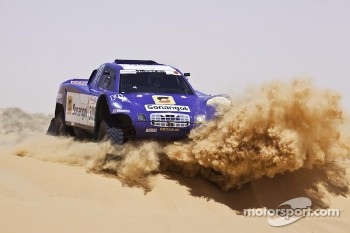 
The roadbook tells you to drive 2.1km ahead and then turn right. 350 meters double caution dip, then left. 120 caution wash-out and right... but there is nothing to see, just undulating sand ahead and only the bright LED of the TerraTrip tells you where you are and when to turn... and the more you overshoot the turns or spin the wheels it gets a little less accurate until over a dune you catch a glimpse of a checkpoint where it can be reset and you can catch a breath. Just one though, and then you are pushed back into the seat as the car accelerates hard and then it's past the few dots of photographers standing on rises with their telephoto lenses and back into the wastes of the desert again. But every single kilometer of the 285km stage has to be driven at the maximum, as fast as the vehicle and terrain will allow, alternatively jarring you against your 5-point harness then slamming you back into your seat.

Every corner is blind, every crest of a dune hides the dip behind it and every single one requires a split-second reaction on how best to manage the landing; steering, braking or accelerating while at the very same moment as judging how best to approach the next rise. Each tug on the steering wheel, every stab on the accelerator is a tight-rope balance between caution and risk; conserving your position or trying to catch the guy ahead... just a few km/h difference can mean the difference between getting bellied-out on a crest or taking a hard landing. And all this is done in a cabin that is normally over 50C (122F) degrees, sometimes approaching 60C (140F), in three layers of overalls, the sun glaring in and the heat from the engine and transmission soaking through the floor... all the time maintaining complete concentration as one stone catching the tyre means a puncture, a bad landing could mean the end of the rally and a misjudged crest could mean a massive accident. And the sand is so soft that if you take a crest just a little too slow or the rise is just too steep you'll need to get out and start digging and pushing to get the car going again... and a certain Mr Schlesser was doing all of this with just 2wd on his Buggy! So this is what rally-raid is, and this is just a normal stage on a normal day, so when Novitsky says that the stage was hard, what he really means is that normal people like you and me would be unconscious from fear or exhaustion before the first CheckPoint!

It was a beautiful fight! A finish at the second position between Leonid's and Nani's BMWs is a good thing.


The second day's stage was cancelled because of a sandstorm with winds over 80km/h making it impossible to see, but with 5 other marathon stages all over 200km, some nearly 300, the fight for the lead was incredibly close, with Novitsky and Schlesser exchanging the lead by margins of minutes and at times, even just seconds. Two masters, one a veteran legend, the other a newly ascended champion sparring together in the sand, parrying timesheet blows. Going into the penultimate stage Schlesser was a little over a minute behind with nearly 500km to go, the slenderest of margins. But in the end it was not driver heroics or mastery of the terrain that set the outcome, it came down to a technical issue with Schlesser's buggy as alternator failure slowed him sufficiently to let the Russian off into an unassailable lead. The French 2-time Dakar champion is a consummate gentleman though and his words at the end were full of praise, for the event and for his adversary... if not quite so for the current regulations.

“It was a beautiful fight! A finish at the second position between Leonid's and Nani's BMWs is a good thing especially since the regulations are not in our favour compared to big diesel engines. I just wish things change in the future. But I am extremely satisfied with this result which consolidates our position at the top of the World cup on the two wheel-drive category" 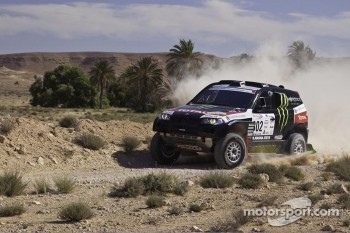 
Behind the battle of the titans, quietly taking two stage wins was Novitsky's X-Raid team mate Nani Roma who was driving for the first time in a year, but a heavy landing into the trap of a sand formation known as a 'bowl' on the 3rd stage lost him 40 minutes and any chance of victory. Still, 1st and 3rd is an excellent result and with 4 out of 5 stage wins going to the team, X-Raid's Sven Quandt was understandably jubilant. “Leonid has finally managed his first victory of 2011 and this is great," he smiled.

In the T2 category for production cars Russia's Ilya Kuznetsov came away with more than the class victory, something that mere speed and luck can't win; the respect of his fellow competitors. At every opportunity he stopped to help those ahead of him stuck in the sand. The heavy Toyota land Cruiser was a bit of a handful on the softer surfaces, but a combination of intelligent driving and the misfortune of his closest rivals puts the Russian right back in the fight for the recently reinstated T2 championship.

The next round of the World Cup for Cross Country Bajas will be in Spain, from the 22nd to 24th of July. Round 1 winner Boris Gadasin in his G-Force Proto will be back on familiar territory and with his chances in this new mixed discipline championship looking increasingly remote he will be spoiling for a fight.