Just a week after the success in the Abu Dhabi Desert Challenge the teams now are going to contest the Sealine Cross Country Rally in Qatar.

The X-raid Team and the Monster Energy X-raid Team currently have got virtually no time for a breather. Just a week after the success in the Abu Dhabi Desert Challenge – with four MINI ALL4 Racing vehicles in the top 10 – the teams now are going to contest the Sealine Cross Country Rally in Qatar. The Trebur based team once again is going to enter four MINI ALL4 Racing rally vehicles.

The Abu Dhabi Desert Challenge winners Vladimir Vasilyev and Konstantin Zhiltsov will once again go for it. Qatar’s MINI ALL4 Racing driver Nasser Al-Attiyah is going to contest his home event together with Matthieu Baumel (FRA) in the navigator seat and the third vehicle will be raced by Poland’s Krzysztof Holowczyc and his German co-driver Andreas Schulz. The young Pole Martin Karczmarski and his Portuguese navigator Filipe Palmeiro will race the fourth MINI ALL4 Racing. 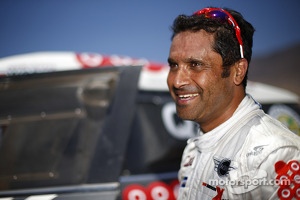 The Sealine Rally in Qatar also represents the next FIA Cross Country Rally World Cup round. With his win accompanied by the early retirement of Yazeed Al-Rajhi, Vasilyev leaped to the very top of the World Cup rankings. In an off-road rally in Qatar, Al-Attiyah just has to be involved. The 2014 Dakar was the first event he contested at the wheel of the MINI ALL4 Racing and he finished third, right away. This week’s event will be the first off-road rally he is going to contest in a MINI since the Dakar. And the same applies to Holowczyc who crossed the Dakar finish line in Valparaiso in fifth position, this January.

Over the course of the five days, the competitors will cover nearly 2,000 kilometres, with the special-stage distance amounting to 1,740 kilometres. The first special stage with a distance of some 160 kilometres will be the shortest. On the following four days, the teams will have to cover an average mileage of about 400 kilometres. Crews and vehicles will have to cope with the most different terrains, in Qatar: the event features sand and dunes on the one hand as well as fast and rocky tracks on the other.

“It definitely will be an interesting event with several potential winners,” said Team Manager Sven Quandt. “Nasser definitely will try to win his home event and at the same time, Vladimir and Yazeed are fighting for FIA World Cup points. And Krzysztof and Martin also have got what it takes to make it to the very top. For me, it would be of major importance for us repeating the good team result we achieved in the Abu Dhabi Desert Challenge.”