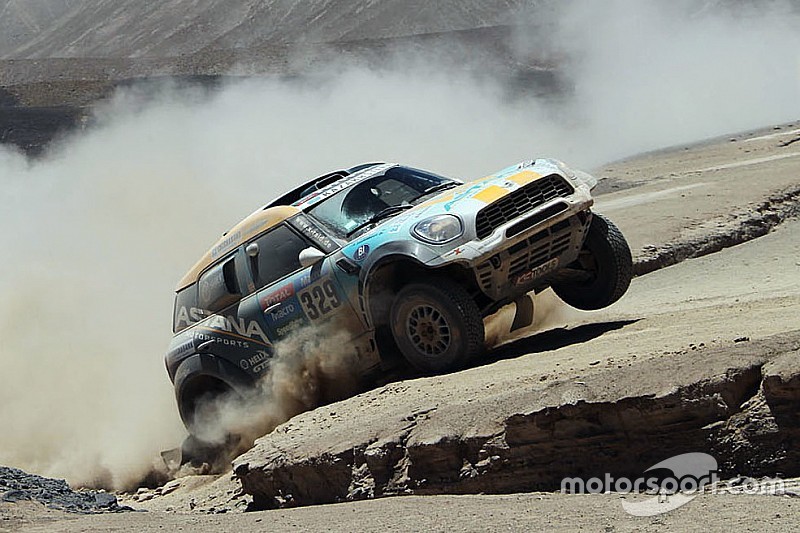 10,734 km, three countries and two continents are just three challenges five MINI ALL4 Racing and their crews will have to face in two weeks of long distance rally action.

Munich. MINI ALL4 Racing cars are set to compete for the first time at the Silk Way Rally. The Silk Way Rally takes place across some of the most spectacular landscape on the planet as this former trade route winds its way from Russia to China.

The sixth edition of the Silk Way Rally starts with a podium ceremony to be held at Moscow’s Red Square on 8 July. The race officially starts with Leg 1 on 9 July as the competitors head east to Astana, capital of Kazakhstan, and finish (Leg 15) in Beijing, China 24 July.

The route from Russia to China will cover 10,734 km, of which over 4,000 km will be special stages. All manner of terrain will be encountered en route, from soil to gravel, to rocks and dunes. Altitude will also play a part in the race; some sections will take place at 2,500 metres elevation.

MINI has risen to the challenge of the Silk Way Rally with the entry of five MINI ALL4 Racing prepared do battle against extreme arduous conditions and an international line up of competitors.

The MINI ALL4 Racing family consists of five pairs of experienced drivers and co-drivers. For X-raid Team, Yazeed Al Rajhi (KSA) and co-pilot Timo Gottschalk (GER) are looking to capitalise on their recent run of good form. Presently they hold second place in the 2016 FIA World Cup for Cross Country Rallies. Joining them on the start line is fellow X-raid Team pairing of Harry Hunt (GB) and Andreas Schulz (GER). Although a relatively new pairing, this crew completed the 2016 Dakar Rally with a well-deserved 10th place.

Three other MINI ALL4 Racing are also set to compete at the Silk Way Rally. Under the banner of Astana Motorsport there are Aidyn Rakhimbayev (KAZ) / Anton Nikolaev (RUS) and Bauyrzhan Issabayev (KAZ) / Vladimir Demyanenko (RUS).

Rakhimbayev / Nikolaev also have Dakar experience in a MINI ALL4 racing, when they finished the 2015 edition in ninth. Issabayev and co-driver Demyanenko have no previous race experience at the controls of a MINI ALL4 Racing, but Issabayev’s previous Dakar events will no doubt stand him in good stead over the distance of the Silk Way Rally. Hoping to make use of local knowledge in Russian territory and wins in the FIA World Cup will be the massively Dakar and FIA World Cup experienced duo of Vladimir Vasilyev (RUS) and Konstantin Zhiltsov (RUS) driving the fifth MINI ALL4 Racing in the colours of G-Energy Team.

The two week-long Silk Way Rally is without doubt a tough event and almost mirrors the extreme racing conditions to be had at the Dakar Rally. Despite unknown road and weather conditions as the race crosses two continents, the five MINI ALL4 Racing crews are more than ready to take on whatever they come across because of their vast experience.

Of course, it also helps knowing the MINI ALL4 Racing is one of the most durable and reliable long distance rally cars ever to be produced – four consecutive Dakar titles (2012-15) and second in 2016 reinforces this. Add to this four FIA World Cup championship titles and you can understand why the MINI ALL4 Racing is a highly respected competition machine.

Performance and reliability doesn’t come easy, but MINI achieved this very early because of its commitment to ongoing development. Indeed, because of the distance involved and the range of terrain to be encountered, the Silk Way Rally is a perfect testing ground for MINI and the famed MINI ALL4 Racing – especially as the cross-country rally world is already focussed on Dakar Rally 2017.