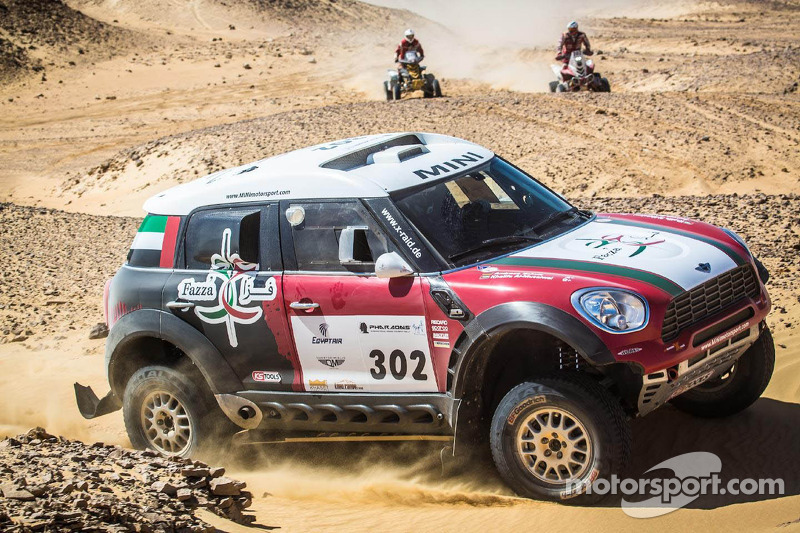 After yesterday's chaotic stage the dust has settled at the foot of the pyramids for the crowning of a new world champion. Kalifa Al-Mutaiwei cruised through the 308km stage in his MINI All4, just a slight navigation mistake the only worry, and duly took victory in the 30th anniversary Pharaons Rally as well as the FIA Cross Country World Cup.

“Today felt like the longest stage of the whole rally,” he said at the finish line.

Winner of today's final stage was Regis Delahaye who is happy about his MD Buggy's new transmission parts. “I am glad that the old shafts broke yesterday so close to the finish because if they didn't they would have only lasted 15km into the stage today. But the new ones are a real improvement and so we could go much faster. And also I really loved this stage!” Delahaye takes the runner's up spot on the podium which is a great achievement seeing that this is his first time in Egypt.

After yesterday's stage win Miroslav Zapletal followed up with another strong performance to take 2nd today and 3rd overall in his Hummer H3. After being hampered by oil cooling problems Patrick Sireyjol of the Cummins France Team takes 4th and proving all pre-rally predictions correct Jun Mitsuhashi dominated the T2 class from the outset taking a giant killing 5th overall, one place ahead of his Toyota Auto Body team mate Nicolas Gibon.

The prize for top local team goes to the ever-friendly Tarek El Erian in his bright orange, aptly named Batmobile Buggy in 8th overall and that position has also earned him free entry to the Dakar as part of the Dakar Challenge.

Russia's Boris Gadasin didn't make it out of the desert last night and so the FIA World Cup for Teams goes to the next and last round in Portugal for the Portalegre 500. from the 1st to the 3rd of November.

Post note. I got a lift with Costel Casuneanu's team and what was left of his Mitsubishi. A sad collection of smashed carbon fibre was chucked into the back of the truck before we left and he showed me one of his wheels. The force of yesterday's impact has flattened one of the front wheels into an oval!! His car might be battered but his spirits are just fine... although you might only be seeing him on the shorter but more technical Baja rounds next year...