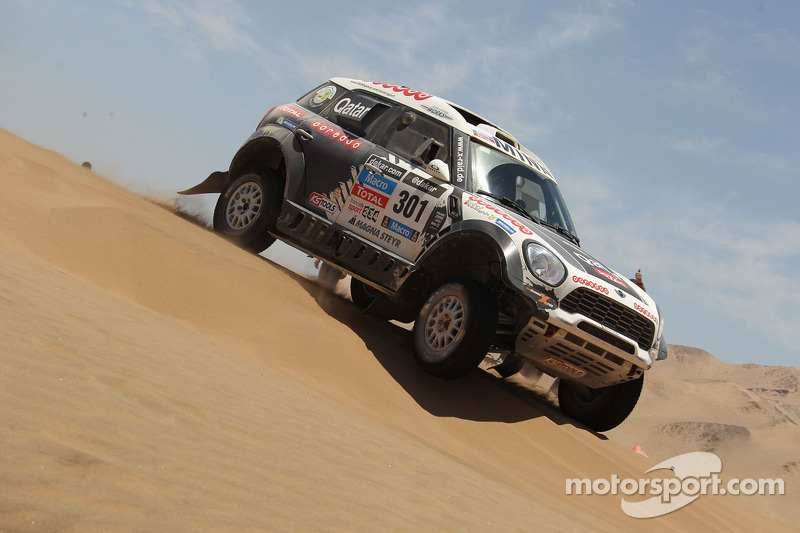 Just two weeks after the triumph in the Abu Dhabi Desert Challenge, X-raid celebrates its next success. In Qatar’s Sealine Cross Country Rally, local hero Nasser Al-Attiyah and his French navigator Mattieu Baumel proved to be invincible, in their MINI ALL4 Racing – and won the event. Vladimir Vasilyev and his navigator, Konstantin Zhiltsov, finished second place and secured with their MINI ALL4 Racing valuable points to their FIA World Cup tally.

Meanwhile, Martin Kaczmarski (POL) and his co-driver Filipe Palmeiro, contesting the event for LOTTO X-raid Team, had to cope with a dose of bad luck just in the final stage. The young Pole hit a rock, resulting in a broken suspension. And for Krzysztof Holowczyc (POL) and Andreas Schulz (GER), the rally also proved to be anything but a walk in the park. Following a radiator problem in stage three, their battle for the top positions was over.

“This was a successful rally for us,” beamed Team Manager Sven Quandt. “We now hold the World Cup lead and in addition, we added a lot of points to our tally. And to be honest, we never had doubts that Nasser is able to win his home event. After all, he knows the region like the back of his hand. Nonetheless, it was a hard race with an extremely difficult navigation for everybody.”