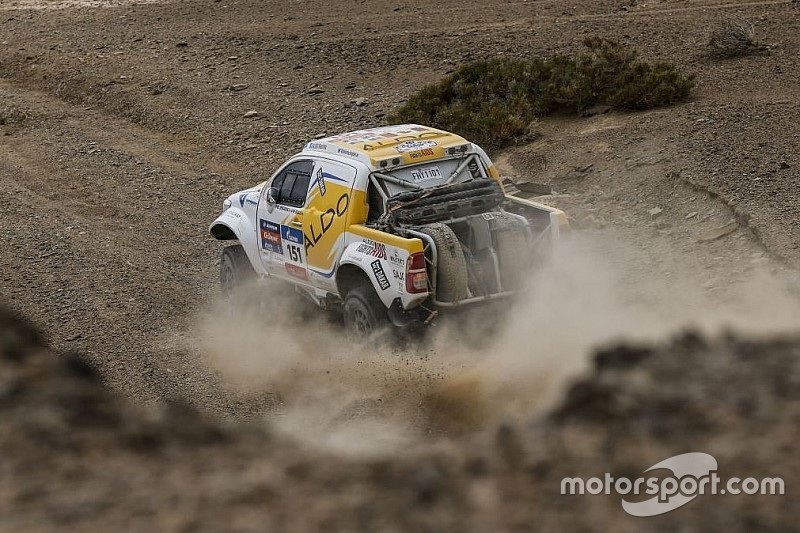 Montreal - July 24 2016 - What an out-of-the ordinary ride, a real adventure in no man's land from Moscow to Beijing for Canadians David Bensadoun and Patrick Beaulé at the Silk Way Rally. Torrential rains, whirlwinds and sandstorms often prevented safety air rescue airplanes and helicopter from flying, denying drivers the pleasure of competition. And to end it all in the final competition stage, huge sand dune walls.

The rally organizer traced the route so that all cars and trucks would have to climb these massive dunes on the soft side of the hills. This is why they call this "a rally raid". More than 10,000 kilometres separate the Capital cities of Russia and China. To make things more interesting, timed race sectors were added where everything was allowed except that competitors could not miss hidden way points between two check points.

The Canadian drivers arrived in Beijing on Sunday in 12th position overall and third in the T1-1 private entry four-wheel drive fuel prototype class. Following 42 hours of hard driving in the timed speed sectors, the ALDO Team crew concluded their journey only 27 minutes behind second-place class finisher Andrey Dimitriev of Russia and more than three hours ahead of following the car. A total of 27 vehicles were entered in the T1-1 class and 19 crossed the finish line.

Prior to the one day pause at Almaty in Kazakhstan on July 20, and following the first six days of rallying, the ALDO Team was 18th overall in the overall T1 class standings, and ninth in the T1-1 privateer entry class, only 23 minutes out of fifth place. Over the course of the following eight stages, things would dramatically change for the Canadian entry.

A total of 102 cars started the rally in Moscow

Only 71 made it to the finish line. There are probably some lost souls still searching their way out of the Gobi Desert following the end of the 15-stage 2016 Silk Way Rally. Another 23 service trucks were also in a race of their own, and all of them made it to Beijing. Actually, the final outcome of the rally was decided on Saturday when the final competition stage ended in the Inner Mongolia Capital of Hohhot. The triumphal 507.81 km convoy drive to Beijing on Sunday is a long prelude lap that will honour all class winners on the ceremonial podium at the Olympic Complex.

"Thank God it's over!" declared Montrealer David Bensadoun. "We made it. We wanted to be top amateurs and top 20 overall. We battled with some very fast privateers and professionals. We ended out second fastest in the privateer class and third in the T1.1 class. Wow! A dream come true! The team was amazing, the Toyota flawless and the navigation was outstanding and given that we didn't miss a single waypoint, we had no time penalty. The effect of the jet lag, the bad quality of food, the extreme noises from tools and generators, VIP party tent until 4 am, some nights at + 36C in our tent and the very long distances we had to travel everyday, made the Special Stages only one part of the challenge."

Patrick Beaulé, a Montreal south shore resident had a lot to say about his last day of racing in the Gobi Desert. A difficult day according to him.

"The organizer warned us that Saturday would be another very tough day. Lots of dunes and in the final section, they would be approached on the soft side, which would make it very hard at the top for the navigator", said Beaulé who mentioned that they were ready to go after car 152 of Andrey Dimitriev which was only 11 minutes ahead of them in the overall standing. And then, it happened. "We tipped over on the left side. We entered a corner too quickly. This was right after a very rough section of ultra deep sand.

The compacted sand under our Toyota compressed the brake callipers and when David needed to brake, the pedal went to the floor, Thanks to the G-Energy Engine Oil Scania truck crew, we made it out of our jam. The front bumper, front left fender and the front left door were damaged but it could stay that way for the remainder of the rally. No one was injured! Then, we had a flat tire. We lost nearly half an hour to fix all this and eventually missed 11th spot by a mere 27 minutes. We pushed the ALDO Toyota to its limit. It was a tough day and the dunes were very, very, very difficult to handle. Soft and steep! The toughest we ever encountered."

Peugeot was going for all the marbles at the Silk Way. It turned out okay for the works-backed factory team, but it did not meet all their expectations. They opened up with a win and were not really threatened for the overall T1 Class lead afterward, winning 9 of the 12 specials, four of them by eventual rally winner Cyril Despres and navigator David Castera. Over the course of the Silk Way, Despres dominated the overall T1 standings except on two occasions when his teammate Stéphane Peterhansel overtook him. Despres crossed the finish line with a 24-minute 51-second lead on the Mini All4 of Saudi driver Yazeed Al Rahji who won two of the timed speed sectors. Russian Vladimir Vasilyev, also driving a Mini, finished third, 50 minutes back from the Frenchman. Two more Minis rounded up the Top-5.

What happened to the other Peugeot favourites?

The Peugeot house broke down when its star driver Sébastien Loeb was denied his Stage 12 win and lost his second place overall after being penalized four hours for failing to come within the required distance of two Way-Points during the stage. The other French favourite, Stéphane Peterhansel rolled his Peugeot on July 13 with fortunately no injuries to its occupants. He lost nine hours in the process. Game over for the two Frenchmen. Loeb finished seventh and Peterhansel, 15th overall.