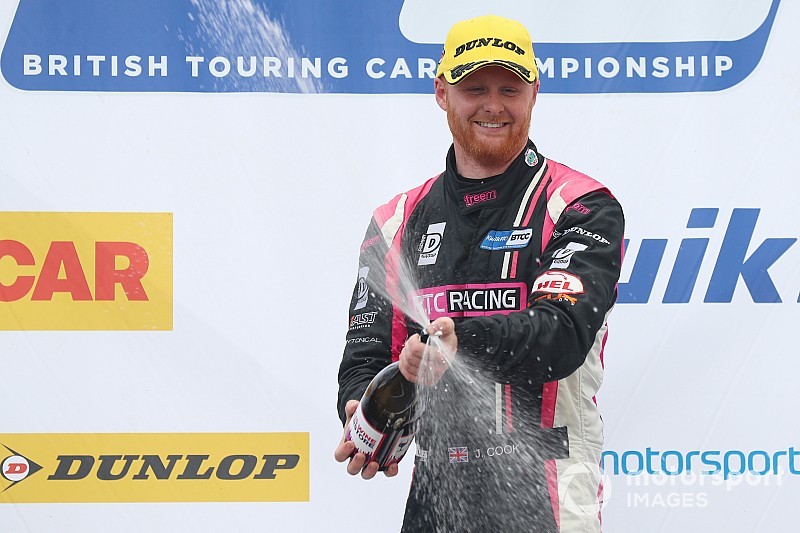 Josh Cook bagged his third win of the BTCC season in the second race at Brands Hatch as polesitter Sam Tordoff dropped down to 10th.

The BTC Racing driver started only fourth but capitalised on Adam Morgan’s conservative attempt to pass Tordoff to pull through and lead by almost two seconds at the flag.

Tordoff looked strong in the initial phase of the race, acing his launch while second starting Dan Cammish bogged down heavily to drop to seventh.

That allowed third-on-the-grid Morgan and Cook to gain a place at the off, with Tordoff breaking away by several car lengths despite carrying the maximum 54kg of success ballast for his race one win.

Tordoff held a 0.874s lead at the end of the opening lap, but Morgan carved 0.6s out on the next tour thanks to a huge tow down the back straight.

With the Honda Civic Type R of Cook even faster over the lap, just six tenths covered the top three.

Morgan and Cook ran side-by-side on the approach to the Club chicane as they attempted to mount a simultaneous attack on Tordoff, but fell back into their positions to start the following lap.

On the next tour Tordoff suffered a high-speed slide on the exit of Church and so lost momentum on the run to the chicane.

Morgan and Cook enjoyed the straight line advantage and ran three abreast into the braking zone.

Tordoff, struggling with the heavy ballast, was demoted two spots as a more incisive Cook beat Morgan to the race lead.

Cook was carrying 6kg less success ballast than Morgan and so was able to build a gap at around 0.4s a lap, running on to his fourth BTCC victory by 1.973s.

Morgan’s much improved form earned him kept him a comfortable second as Tordoff faded heavily late on.

His defensive work meant he had held on to the final podium spot, while his lack of ultimate pace allowed Cook and Morgan to escape.

But as Tom Oliphant dived up the inside of the AmD Tuning car, it forced Tordoff off line.

That killed his speed and allowed all of Rob Collard, a recovering Cammish, Matt Neal and Andrew Jordan through.

Neal’s strong straight-line performance gave him a last-lap run at the BMW 330i M Sport of Oliphant and he carried his speed on the outside line at the chicane to run on to the final podium spot by just 0.08s.

Cammish limited the damaged from his bad start by netting fifth ahead of Collard, who was drawn on pole for the partially reversed final race.

Jordan chipped away at teammate Colin Turkington’s points advantage with seventh, as the two WSR drivers were split by Tom Ingram.

Tordoff hung on for a top 10 position ahead of Ashley Sutton, Tom Chilton and Jason Plato.