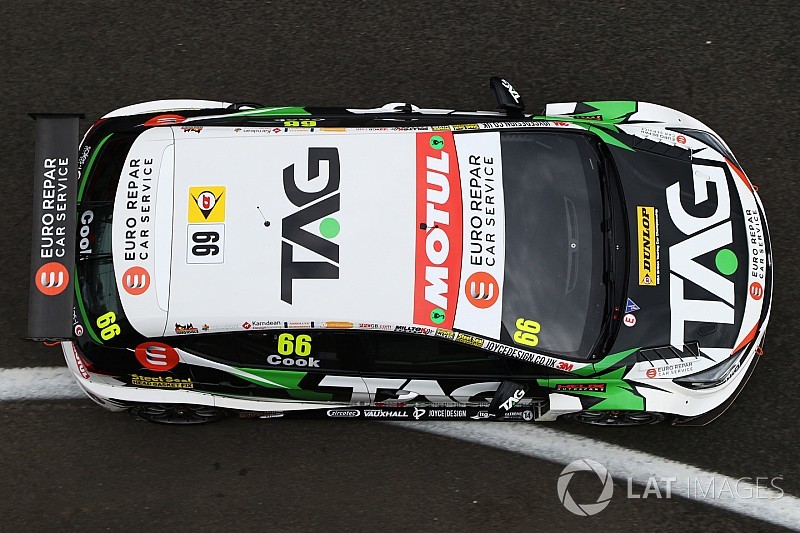 Josh Cook claimed victory in the second BTCC race at Thruxton after a superb climb through the pack in his Power Maxed Racing Vauxhall.

Cook maintained Power Maxed Racing’s record of a race victory in each of the season’s three meetings so far.

He powered from ninth on the grid to cut his way through the heavier cars ahead and, at the end of lap four, went side-by-side with Andrew Jordan’s WSR BMW through the Club Chicane. Cook drove over the kerbs on the inside of the left-handed element and regained the track ahead.

He set off after third placed Sam Tordoff (Motorbase Performance Ford) and passed him at the end of lap five into the chicane. One lap later, he was ahead of Matt Neal’s Team Dynamics Honda.

Turkington was 0.8s up the road by that point, but Cook quickly zeroed in on him and overtook him coming out of Church corner on lap 11.

Cook was elated with his second career victory of the season. “Coming from the middle of the pack, that was excellent fun,” said Cook. “The front of the car was on rails, but the rear was a little loose which made it lively. When points are on offer like that, I am always going to go for that.”

The move to pass Jordan was controversial, but the winner felt he was justified in his actions of cutting the left-hand apex. “AJ pushed me wide a little,” said Cook. “I could see he was struggling for pace a little. I had passed other people at the point and there was no problem, but he obviously didn’t like it.”

Turkington held on for second place, which was taken with 66kg of success ballast, ahead of Neal and Tordoff.

Neal, carrying 75kg of success ballast, had been beaten away from pole position by Turkington, but felt he would have been in position to reel in his rival before Cook’s intervened.

Jordan, who is suffering from a severe stomach virus, followed the Foord over the line ahead of Senna Proctor in his Power Maxed Racing’s Vauxhall and Adam Morgan’s Mercedes.

Morgan has been drawn on pole position for the reversed grid third race of the day.

Championship leader Tom Ingram had started last on the grid after an alternator failure in the opening event, and he put in a swashbuckling drive to finish in 12th place, on the bootlid of reigning champion Ash Sutton (Team BMR Subaru).