Team BMR cause major surprise with 2014 line up

Double BTCC champion Alain Menu return to the series and will race alongside former Airwaves Racing youngster Aron Smith in a pair of VW Passats.

Team BMR have caused a major shock after announcing their driver line up for the 2014 Dunlop MSA British Touring Car Championship, which will see former double BTCC champion Alain Menu return to the series and will race alongside former Airwaves Racing youngster Aron Smith in a pair of VW Passats.

Menu hasn’t raced in the series since claiming a second BTCC crown in 2000; the final year of the Super Touring era driving a Ford Mondeo, which added to his 1997 title when driving a Renault Laguna. Since then Menu has spent much of his time racing for Chevrolet in the World Touring Car Championship, but did race in a one off race at Thruxton in the BTCC, for Triple 8 Vauxhall, during the final race of 2007.

Speaking about his return to the series the 1997/2000 champion said, “I got a call in early December – the plan all sounded good, so I came over to the UK around Christmas time to meet with Warren [Scott] and the team. Their plans and approach to the project are very appealing, we’re all highly motivated and it is our aim to be amongst the teams at the front. I am taking a realistic approach of course, it will take us some time and there are a few unknowns. It will be nice to race against people like Matt Neal again, and Gordon Shedden was trying to break into the BTCC just as I left so I’m looking forward to racing against him. Jason [Plato] has matured since we were team-mates too, so I’m sure we’ll get on well. Plus there is a whole generation of new talented drivers out there, so 2014 should be very exciting. 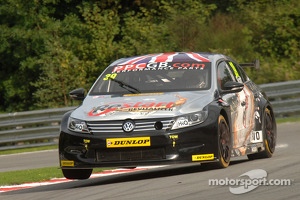 I’m also looking forward to racing on the fantastic British circuits again. The tracks are great and the public are always enthusiastic. We’re going to have some test days soon, so I’ll know then what work needs to be done, but I’m sure it’ll all come back to me very quickly.”

With Menu signing for the team it has slightly overshadowed the fact that Team BMR has also signed one of the best younger talents on the grid in Smith. After racing in the Clio Cup Smith joined Motorbase Performance in 2012 and after a slow start to his BTCC career, Smith came alive in the second half of 2012 and took a single victory during the last race of the year at Brands Hatch.

Smith stayed with Motorbase Performance/Airwaves Racing in 2013 and took more podiums before deciding to switch teams for 2014. Like Menu’s move Smith’s is also a bit of a surprise but again is another great signing for Team BMR.

The former Motorbase driver admits it was tough to leave the team but believes Team BMR can progress his BTCC career and said, “I couldn’t be happier to finally get to announce our plans for the 2014 BTCC. Having witnessed first-hand the relentless work that Team BMR has put in during the winter I am wholly confident that we will be challenging for wins from the outset. Choosing to change teams was not a decision made lightly, however, the quality of my teammates proves how serious the team is about performing at the highest level and I feel this move is something that will help further my career. I have a quality car beneath me, a professional team behind me and arguably the best engineer in the business. This is my year to be at the front of the greatest touring car championship in Europe.”

The car both Menu and Smith will drive is the VW Passat that saw Tom Onslow-Cole take 3 podiums last season, with a best result of 2nd at Thruxton for Tony Gilham’s Team Hard outfit. A second Passat appeared for the second half of 2013 when Team BMR owner Warren Scott bought and ran the car in joint partnership with Gilham, after previously running a S2000 Seat Leon for the first part of the year.

Scott has now taken over full control of the team purchasing Team Hard’s assets and merging the two teams together, with Gilham still overseeing the operation as well as adding some additional key personnel. Along with the two Passats the team will continue to race Team Hard’s other two cars, the Vauxhall Insignias, under the same name as last year RCIB Insurance Racing.

It is in one of these cars that Scott will race, jumping across from the Passat from last year, where he will race alongside 2012 Clio Cup Champion Jack Goff who will continue in the car for the second year.

Speaking about the project a delighted Team BMR owner said, “As team owner of BMR, I believe that we now have the correct structure of key personnel and professional people in place to achieve our goals for the 2014 season. I am extremely proud to be associated with such an enthusiastic bunch of hardworking people that make up the newly formed Team BMR, from Tony Gilham who is coordinating, Geoff Kingston our newly appointed chief engineer, Alan Cole and Mark Turner who manage the team, through to the so important mechanics and other boys that are working tirelessly, with no effort spared into producing the foundations of what I anticipate to be a very successful team. Looking forwards and onto this year - well what can I say? It is just looking quite unbelievable! There has been major developments to the cars, we have secured an incredible driver line up, Alain brings a wealth of talent, experience and knowledge, Aron and Jack bring their sheer driving ability and me- well, determination ! With the enthusiasm and dedication from the team as a whole, we hope to put on a solid, good show at the very least.”

As for the 2012 Clio Cup Champion, Goff certainly proved he deserved to be in the BTCC in 2013 with great flashes of speed. However he saved the best for last with an incredible drive to second in the final race of the year at a wet Brands Hatch, challenging 2012 BTCC champion Gordon Shedden for the lead all race.

Goff now hopes to build upon that final race of 2013 and looking ahead to 2014 said, “The last race of the season has certainly helped me over the winter. It’s brilliant to have a second year. We had no testing or development last year, so with every race meeting I was learning the car and the team was learning the set-up, but we had good speed even if we couldn’t show it in all the races. We’ve brought in some new personnel to the team as well which should really help with the car. It’s going to be tough at the front of the field without a doubt, but there’s no reason why we can’t be fighting for podiums from the word go, and hopefully snatch that first win when we can.”

There is little doubt that for 2014 Team BMR Racing means business and has definitely signalled their intention by signing a winning driver line up. Key personnel additions will also boost the team and, now, it is up to the team to build upon some encouraging results from 2013 with all the ingredients in place to challenge for podiums and wins on a regular basis.

Alain Menu returns to the BTCC

Giovanardi returns to the series for 2014