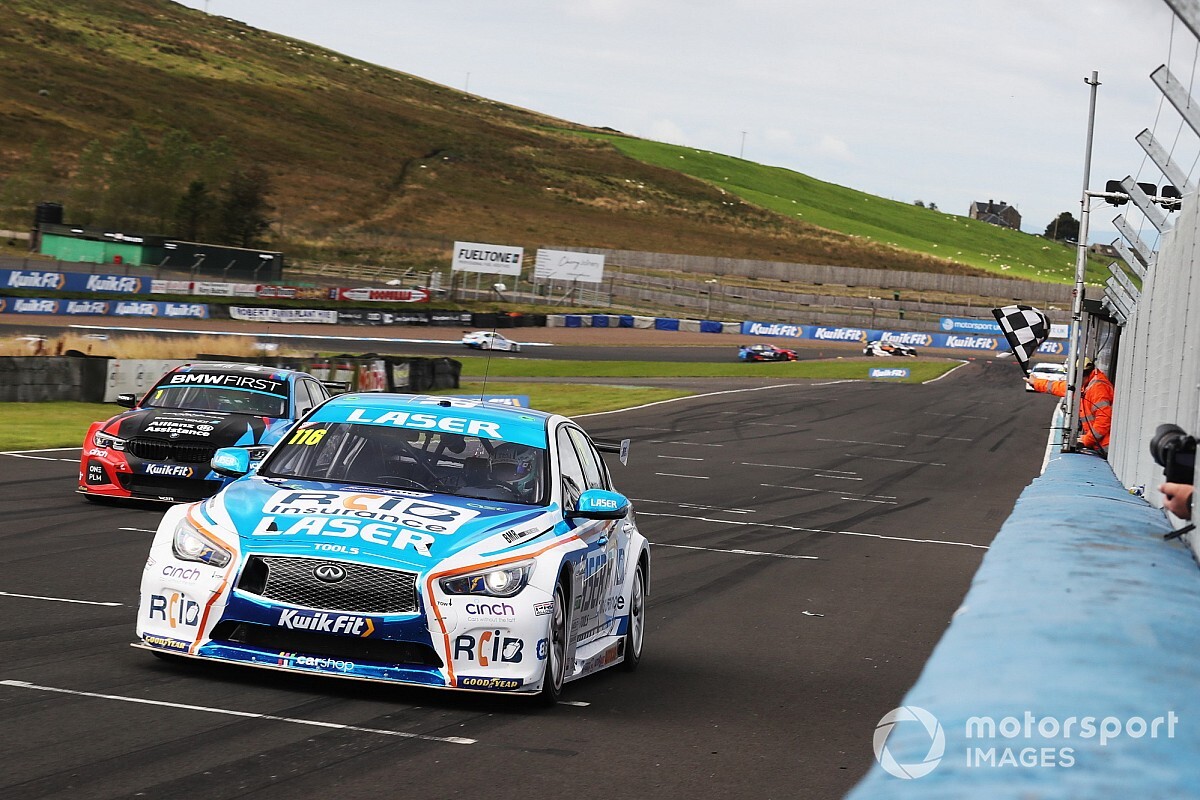 Ash Sutton kept Colin Turkington at bay to take victory in the first race of the BTCC triple-header at Knockhill.

Sutton’s Laser Tools Racing Infiniti had extended a comfortable margin of over 1.5 seconds after leading from pole position, but a safety car called after five laps pulled Turkington’s West Surrey Racing-run BMW 330i M Sport onto its tail.

Turkington shadowed Sutton throughout the remaining 18 laps of green-flag racing, the gap rarely inching far beyond 0.5s, and made a half-feint down the inside of the hairpin on the final lap, but fell 0.350s short at the chequered flag.

The result means that championship leader Turkington, who carried 60kg of success ballast on his BMW into the weekend, effectively swaps weight handicaps with points runner-up Sutton – who arrived in Scotland with 54kg – going into the second race.

“Colin was there, but we just managed to hold that sensible gap we required so he couldn’t put a move in,” said Sutton after his third win of the season.

“The initial plan was to try and break clear, but the safety car closed that down, but I got a clean restart and managed that gap.

“It was under control, shall we say.”

“It wasn’t about throwing caution to the wind – it was about tucking a result away,” said Turkington.

Jake Hill emerged on top of a frantic front-wheel-drive battle to claim third in the AmD-run MB Motorsport Honda.

Front-row man Hill wriggled all over Turkington’s fast-starting BMW on the opening lap, only for Dan Cammish to launch a fantastic late-braking move on the outside into the hairpin to grab third in the Team Dynamics-run works Honda.

Cammish’s momentum carried him level with second-placed Turkington, but he was shouldered into the gravel trap on the exit of the hairpin, and the lost momentum ultimately cost him places to Hill, Tom Ingram and Rory Butcher.

Ingram spent the rest of the race seeking a way past Hill, his Speedworks Motorsport-run Toyota even pushing the old-spec Honda on a couple of occasions at the hairpin, but there was no way through.

Local hero Butcher, in the Motorbase Performance Ford, similarly had Cammish on his tail on his way to fifth.

The leading sextet, who remained in close formation until almost half-distance, left the rest behind.

Mike Bushell was seventh in the Power Maxed Racing Vauxhall until, under pressure from Matt Neal in the second works Honda, he ran wide at Duffus Dip with nine laps remaining, and the foliage collected in the front of the Astra required a visit to the pits.

Neal therefore took seventh from the second BMW of Tom Oliphant, while Aiden Moffat was ninth in his LTR Infiniti.

The final position in the top 10 was won on the drag race to the line by Stephen Jelley, who used the rear-wheel drive of his Team Parker Racing BMW 125i to pip Tom Chilton’s BTC Racing Honda.

The other BTC Honda of Josh Cook caused the safety car – Cook had just passed Oliphant when the Honda snapped loose on him at the Butchers right-hander and slammed rearwards into the inside barrier.

The race was just getting restarted when James Gornall and Andy Neate collided at Clark, while still under safety-car conditions, although luckily they coaxed their broken machinery back to the pitlane.