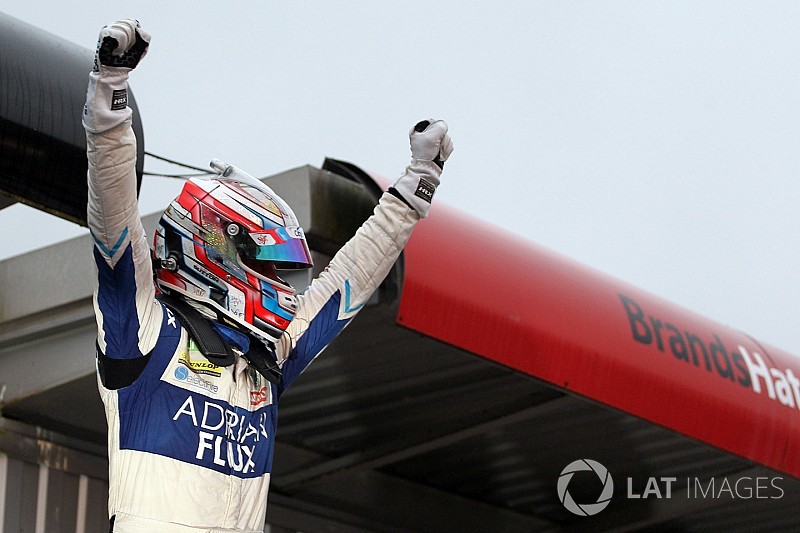 Team BMR Subaru driver Ash Sutton has been crowned BTCC champion after title rival Colin Turkington was forced to retire from the final race of the weekend at Brands Hatch.

After winning race two, Turkington began the finale six points behind Sutton, slashing the 24-point margin that had split the pair following the opening race of the day.

The WSR BMW driver started 10th on the reversed grid, with Sutton two places behind, and made a strong getaway to move up to sixth place by the end of the first lap.

He grabbed another place at Jack Goff's expense into Paddock Hill on lap two, and was set to gain further ground as Tom Ingram bumped Mat Jackson off-road at Graham Hill Bend.

However, as Jackson rejoined the track, his Ford clipped the right-rear corner of Turkington's BMW, giving the Northern Irishman terminal suspension damage.

"It's broken the rear upright," Turkington told ITV Sport. "Nothing you can do in that situation. Mat was coming back onto the track, how he didn't see me... one of those things, just unlucky.

"Gutted for the guys because we had good pace, it's just so gutting to retire. That's touring cars, some days it goes your way, some days it doesn't. Really disappointed. We just needed a bit of luck that we didn't get.

"Fair play to Ash, he's driven well all season, congrats to him and the Subaru guys, they've been great competitors. Just wish it was me on the top step, but not this time."

Sutton sealed the crown with a third-place finish behind Rob Austin's Toyota and Goff's Honda.