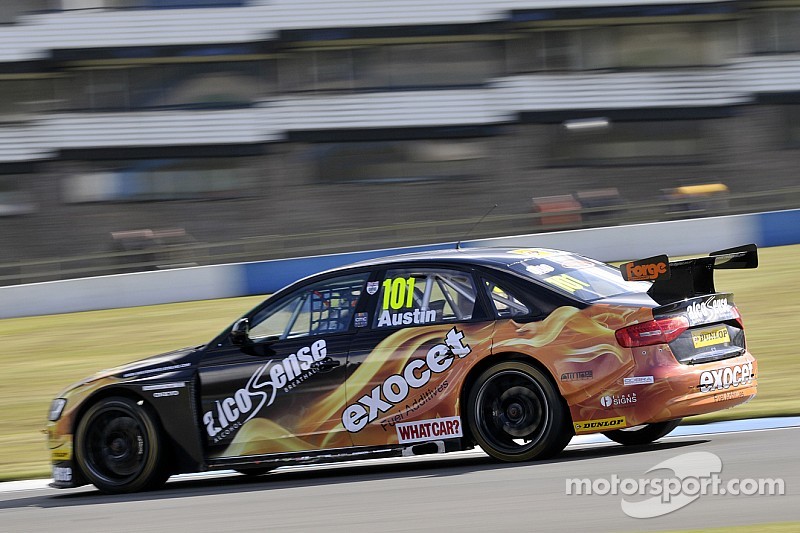 Thirteenth and 16th in qualifying for Rob and Hunter became 14th and 18th in race one of three when a gamble to run the softer Dunlop race tyre on their Exocet AlcoSense Audi A4s didn’t work out. But in race two, on the harder compound tyre, performance was improved and Rob was able to finish 10th and Hunter 11th.

I’m slightly frustrated without how things have worked out today.

Rob had been 12th starting the last lap but when Hunter and another driver were delayed in a tangle just in front of him he was able to pass both to take 10th – which became pole position for race three when he picked the number 10 ball in the reversed grid draw.

Live on ITV4, Rob led race three from pole until lap 20 of 27 when he was passed by the manufacturer-backed Honda and MG of Matt Neal and Jack Goff. A botched move by MG driver Andrew Jordan to pass him later around the lap then forced Rob back to an eventual fifth place finish.

Hunter had been looking good for a best-ever eighth only for his car’s power steering to fail in the closing laps and he fell to 10th.

Rob said: “I’m slightly frustrated without how things have worked out today. The decision to run the soft tyre in race one really wrecked our day but I still managed points in all three races. In that third one of course I wanted the win but a podium would still have been nice – fair play to Neal and Goff; they got me fair and square and if I’m honest I was surprised by how well the Honda looked after its soft tyres. The incident with Jordan… he’s not a dirty driver so I think he just misjudged it and it’s cost us both.

“But this is the best start we’ve had to a BTCC season. We’ve been up there hustling and fighting for good results with both cars and our restructured team behind the scenes has worked together better than ever before. Hunter has been right in the mix which is terrific for him and we’re leaving with two cars very much in tact and raring to go at Donington in two weeks.”

Hunter added: “Once we’d got the soft tyre out of the way in race one we could go on the attack a bit more, but I think Rob was a jammy sod to get that tenth in race two and then end up on pole – it could have been mine!

“Race three… I had the battery warning light come on mid-race and from there started shutting various systems down to try to save it. Three laps to go I felt the power steering start to stiffen a lot and on the last lap it was nearly impossible to keep going. Into the last bend I was still in eighth which would have been my best result, but then it basically seized all together and I’ve no idea how I got it round to the line. It’s built my biceps up nicely. Still I’ve equalled my best result of tenth twice today and I’m not sure if the results have actually reflected just how strong we can be yet.”