Four-time British Touring Car champion Colin Turkington claimed victory in the first race of the day at Snetterton to extend his lead in the 2022 series.

In scorching conditions, Turkington led the field, and had just extended his advantage over Hill to over one second when the safety car was called for the first time on lap five, with the Power Maxed Racing Vauxhall Astra of Michael Crees in a vulnerable position on the exit of the Hamilton left-hander.

Turkington, who as points leader was allowed just one lap of hybrid usage, got an excellent restart, but Hill (allowed four laps of hybrid) reeled the Northern Irishman in, and was applying serious pressure when the safety car appeared again.

This time it was the Laser Tools Racing Infiniti Q50 of Aiden Moffat in trouble, the Scot getting pitched into the barriers at Riches after contact with the troubled Josh Cook’s BTC Racing Honda.

The restart came with three laps of green-flag racing remaining, and Turkington this time kept Hill at arm’s length to cross the finish line 1.098s in front.

“It’s a dream weekend so far,” smiled Turkington, who has claimed the full 23 points for pole, the win, leading a lap and fastest lap.

“I have never been so hot in this car in my life. It was handling really well – it’s just the focus and concentration, trying to keep the car on the limit and manage the gap to the guys behind.

“The safety car was difficult, because it always takes a lap to bring the front tyres back in.” 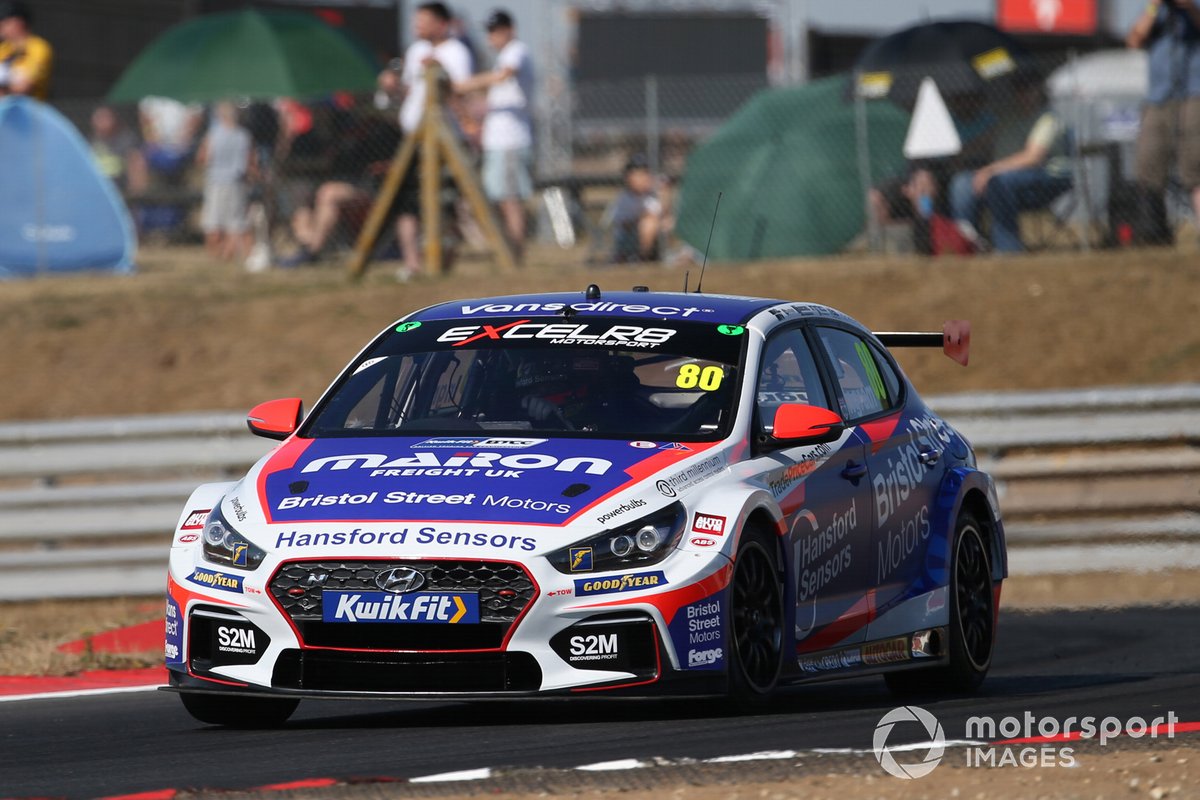 Tom Ingram used his inherited third place on the grid to run in the final podium position throughout, and keep up his title challenge with his Excelr8 Motorsport Hyundai i30 N.

Ingram shadowed Hill early on, but the front-wheel-drive cars appeared to be fading in the hot conditions, although the two safety-car periods did alleviate this slightly.

The BMW of Ciceley Motorsport’s Adam Morgan, who had wriggled clear of a frantic first-lap battle with the third WSR BMW of Stephen Jelley, gave Ingram a hefty mid-race whack at Oggie’s before the second safety-car period, but Ingram held firm to complete the podium.

Jelley was a solid fifth, while Jason Plato did an excellent job to convert his sixth-place starting position to the same result in his BTC Racing Honda Civic Type R.

Plato had a horde of Team Dynamics Hondas and Motorbase Performance Ford Focuses crawling all over him early doors, but got a break while Dan Cammish attempted to chisel his Ford ahead of the Honda of Dan Rowbottom.

While Cammish went on to seventh, Rowbottom narrowly fended off the second Motorbase Ford of Ash Sutton – they were side by side at the finish line – for eighth, with Gordon Shedden (Dynamics Honda) in their wheeltracks after battling past the Speedworks Motorsport Toyota Corolla of Ricky Collard.

Cook made decent progress from 22nd to 14th on the first lap in his BTC Honda, but lost positions in the middle of the race, conceded further ground in the clash with Moffat, and finished 20th.