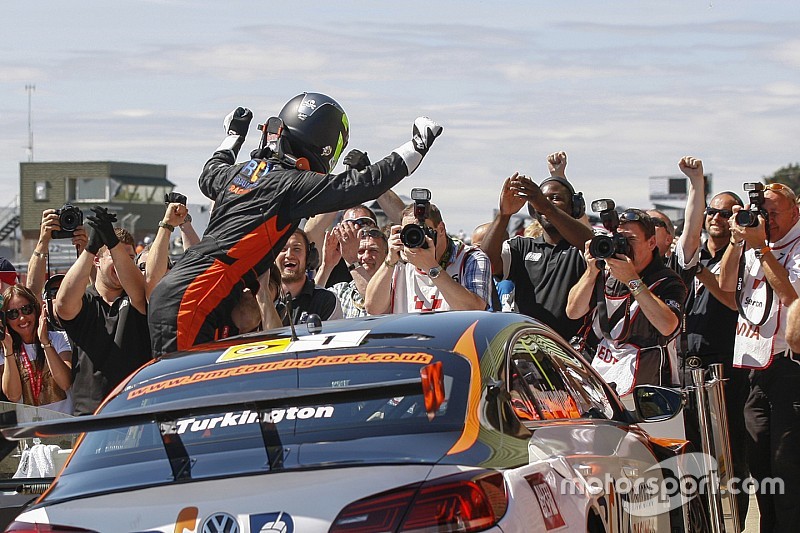 Despite carrying maximum success ballast after his race one victory, Colin Turkington comfortably converted another pole position into a win in race two at Snetterton.

While it was another stellar launch off the line for the poleman, the BMW of Sam Tordoff struggled to get away from second and slipped behind both the Mercedes of Adam Morgan and teammate Andy Priaulx.

Further down the field, there was drama for Honda as Matt Neal made contact with Gordon Shedden  heading into the Hamilton corner, which sent the Scotsman spinning and put him out of the race with damage to his left rear wheel.

Shedden wasn't the only casualty of the race's hectic start, with seven other cars ruled out of contention - race one runner-up Aron Smith among them, his car badly crabbing after contact.

As the race finally settled into a rhythm, Turkington maintained a safe distance to Morgan, while Priaulx, Tordoff and Jason Plato all lined up close behind the Ciceley driver.

The pressure from those behind eventually saw Morgan's pace drop, allowing Turkington to almost double his advantage in no time.

The BMR driver went on coast to the chequered flag and the intrigue in the final minutes was all contained in the fight for second place.

But the podium would stay as it was, Morgan narrowly keeping Priaulx at bay for the runner-up spot.

Plato, running the soft tyre, claimed fourth after overtaking Tordoff early in the race, while Jack Goff brought the car home in sixth ahead of MG teammate Andrew Jordan.

Tom Ingram was all set for an eighth place when a last-lap puncture took him out of contention, promoting Mat Jackson, Rob Austin and Mike Bushell.

Nic Hamilton recorded his best finish in BTCC yet with a 16th place, one spot away from a maiden point, having started from the pits.

Despite early contact with Shedden, Neal had managed to hang on to a top-ten spot early in the race when he was shown a black-and-orange flag due to excessive damage to the front of his car.

Shedden himself, having started the weekend as the points leader, now sits third, with Turkington moving past him and trailing leader Plato by eight points.