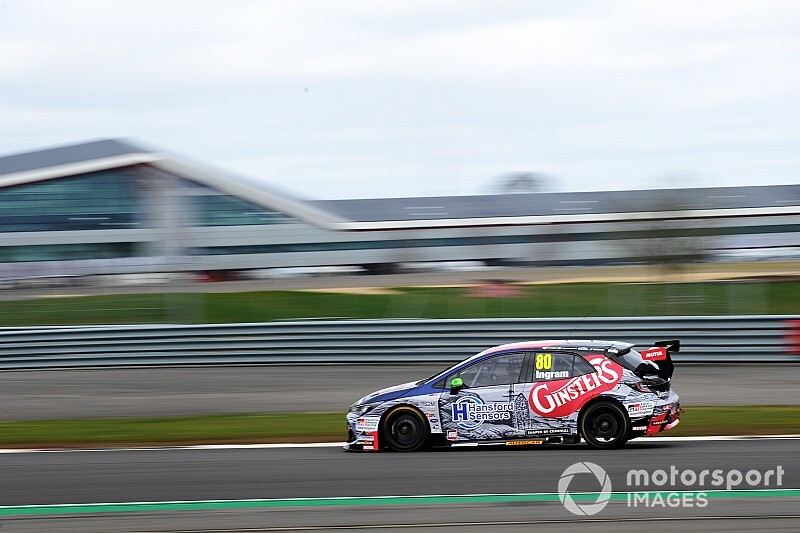 Ingram set the pace in the second of two three-hour sessions with his 1m06.171s benchmark, eclipsing the time of Jake Hill by 0.051s.

Ingram continues to lead the one-car Speedworks outfit, which will run under the Toyota Gazoo Racing UK banner this season, as it undertakes a second campaign with the Corolla.

Hill had led the way in the slower morning run thanks to a 1m06.512s effort. Last year he scored his maiden series victory at Knockhill but has now moved to MB Motorsport – owned by ex-Formula 1 driver Mark Blundell – to drive the long-serving FK2 Honda Civic Type R.

The top 16 all lapped within one second of Ingram, as Team Dynamics driver Dan Cammish ended the day in third place courtesy of a best lap of 1m06.490s.

Reigning independent drivers' champion Rory Butcher has switched to Motorbase this season as it introduces the new Ford Focus ST. He was fourth quickest, running 0.073s ahead of defending champion Colin Turkington in the BMW 330i M Sport.

Turkington heads into the campaign as a four-time BTCC title winner, level with Andy Rouse as the most successful driver in the championship's history.

Teammate Andrew Jordan was seventh fastest owing to his lap set in the morning session, with Senna Proctor separating the two BMWs.

Proctor is another driver to move teams for this season – switching to Excelr8 Motorsport. The squad finished last in the 2019 standings but returns with an all-new Hyundai i30 N Fastback – the first time the marque has featured in the BTCC

Matt Neal continued his rehabilitation following a winter bike crash during which he sustained a collapsed lung and multiple fractures.

The three-time champion, who is set to undertake his 20th season in the BTCC, was eighth-fastest in the sister Dynamics FK8 Civic Type R.

Ashley Sutton made his public debut for the Laser Tools Racing concern, which will continue with the revived rear-wheel-drive Infiniti Q50 project that returned to the grid part-way through last season. The 2017 title winner was ninth but only completed nine laps, all of which were in the afternoon.

Chris Smiley rounded out the top 10 in the second Hyundai.

The test took place behind closed doors in response to the outbreak of the novel coronavirus.

It was also confirmed that TOCA would postpone the first three rounds – Donington Park, Brands Hatch and the Silverstone National races – also as a result of COVID-19.