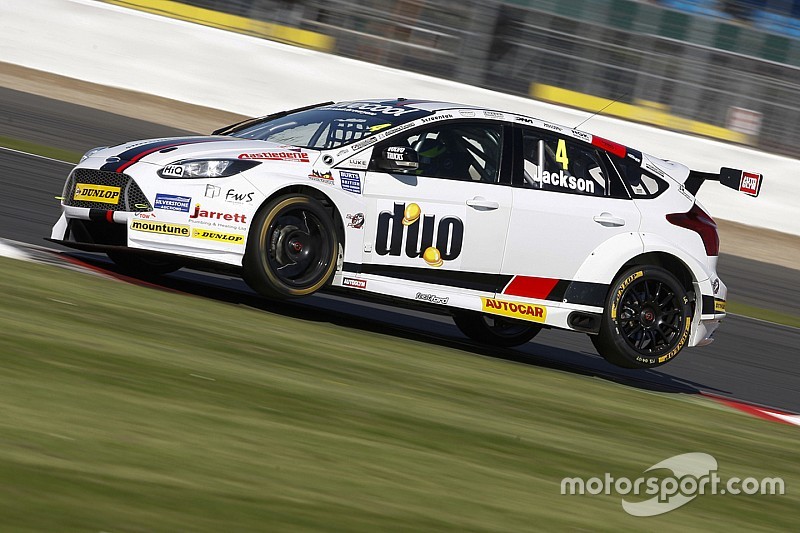 Mat Jackson produced a flawless drive to take a lights-to-flag win in the first BTCC race at Silverstone, while a third-place finish allowed Gordon Shedden to pull clear at the top the standings.

Jackson, electing to run soft tyres, was rapid off the line from pole position, while Shedden was made to work to keep Sam Tordoff at bay.

The duo ran side by side for several corners before Tordoff had to back off and was passed by Andrew Jordan, the 2013 champion then making quick work of Shedden as well.

And while Jordan kept up with the race leader over the first half of the 22-lap race, he soon began to drop off into the clutches of Shedden.

The MG driver's defensive driving allowed Jackson to cruise and manage his soft rubber out front as he banked the second win of Motorbase's return part-time campaign.

Jordan, meanwhile, narrowly kept Shedden at bay for second, with Dave Newsham recording his season-best result in fourth and Colin Turkington making up the top five.

Having been stuck behind Shedden early on, Tordoff saw his tyres hit the cliff in the latter stages and eventually slipped to tenth.

Jason Plato, who arrived at Silverstone just six points behind Shedden, picked up a tyre puncture on the kerb with two laps to go.

The BMR driver is now 21 points adrift of the championship leader, with Neal and Turkington a further 13 and 16 behind respectively.

Jackson's new race lap record ensures he will start race two from pole, with Jack Goff alongside the front row - the MG driver having pitted from inside the top ten and then setting his best lap in clean air.

Andy Priaulx, Smith, Jordan and Shedden will make up the first three rows.