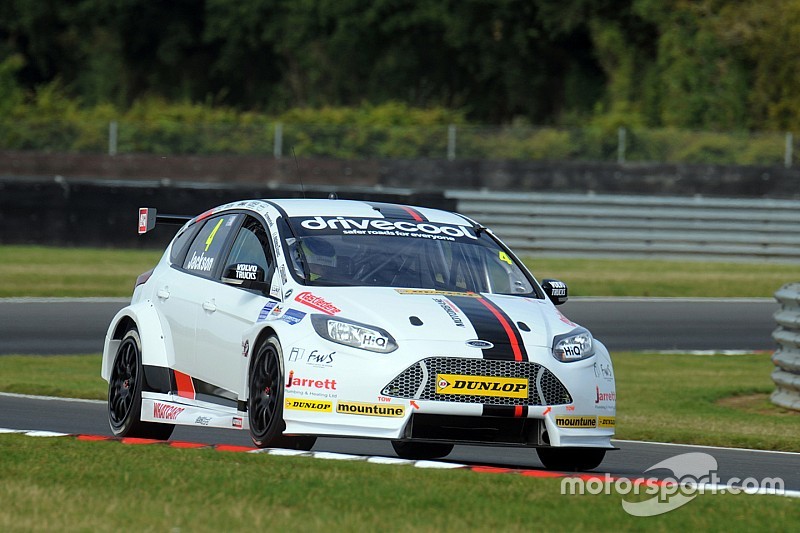 Motorbase's Mat Jackson converted a practice lock-out into a pole position for the opening race of the Silverstone BTCC round, with points leader Gordon Shedden taking second.

Early in the session, champion Colin Turkington was the first driver to dip below Jackson's practice benchmark, setting a 58.383s.

However, Jackson managed to move a tenth clear just before qualifying was red-flagged for Dextra Racing's Alex Martin going off in the gravel.

Despite a busy track right after the restart, Jackson swiftly improved to a 58.145s, going below Jason Plato's qualifying record from 2013.

Shedden, carrying the maximum 75kg of ballast, then took second from Turkington, with Tom Ingram lapping 0.002s adrift for a provisional fourth.

With five minutes to go, Dave Newsham briefly took third, only to be instantly demoted by Turkington, with both then cleared by Andrew Jordan.

Turkington then had his fastest lap removed due to track limits, but responded by retaking third place with his subsequent flyer - only to have that time erased as well.

Jackson, meanwhile, lowered the benchmark to a 58.130s and then found some more time to lap at 58.078s, which would end up as the pole time and the new qualifying record.

Shedden took second, with Sam Tordoff moving up to third place at the chequered flag.

Jordan was fourth, ahead of Newsham, Turkington and Ingram, while Aron Smith and Jack Goff followed in eighth and ninth.

A late lap from Plato, who up to that point had endured a difficult qualifying session, allowed him to make it three BMR cars in the top 10.

BMR team owner-driver Warren Scott meanwhile missed the session after a heavy practice shunt that resulted in him going to hospital, where it was revealed he had suffered two fractures in his back.