Toyota star Rory Butcher made it two wins out of two in a gripping second British Touring Car Championship race of the day at Silverstone.

Butcher had led all the way from pole in his Speedworks Motorsport-run Corolla, but ceded the advantage momentarily at the Brooklands left-hander on the final lap after a ballistic attack from Josh Cook’s BTC Racing Honda Civic Type R.

Cook not only outbraked Butcher but also himself, so ran wide on the exit, and that allowed Butcher to take a superb victory on 75kg of success ballast for winning the opening race.

Butcher in part had Tom Ingram to thank for a superb defensive drive in his Excelr8 Motorsport Hyundai i30 N, which started alongside the Toyota and was on 66kg of ballast.

Ingram shadowed Butcher for the first three laps, before a brief safety-car interlude to recover the Team Hard Cupra of Nic Hamilton, which was in the Becketts gravel after contact with another car.

At the restart, Butcher pulled out a 2.248s advantage within five laps, while Cook – on 48kg of ballast – sought every way he could past Ingram, but in turn had to defend from the Laser Tools Racing Infiniti Q50 of Aiden Moffat, on 57kg of ballast.

The safety car then reappeared, with Jade Edwards needing her BTC Honda extricating from the gravel between Luffield and Woodcote after contact from Gordon Shedden’s Team Dynamics Honda.

That left time for a 10-lap sprint to the flag, and Cook was immediately all over Ingram.

On the second lap after the restart, Cook chiselled his way inside the Hyundai at Becketts, but Ingram had the inside line for Brooklands and held on.

But that put Cook on the inside for Luffield, and he inched in front as they approached Copse Corner.

Cook was 1.138s adrift of Butcher by the end of this lap, but now set to the Toyota, and was right with it with a lap and a half to go. 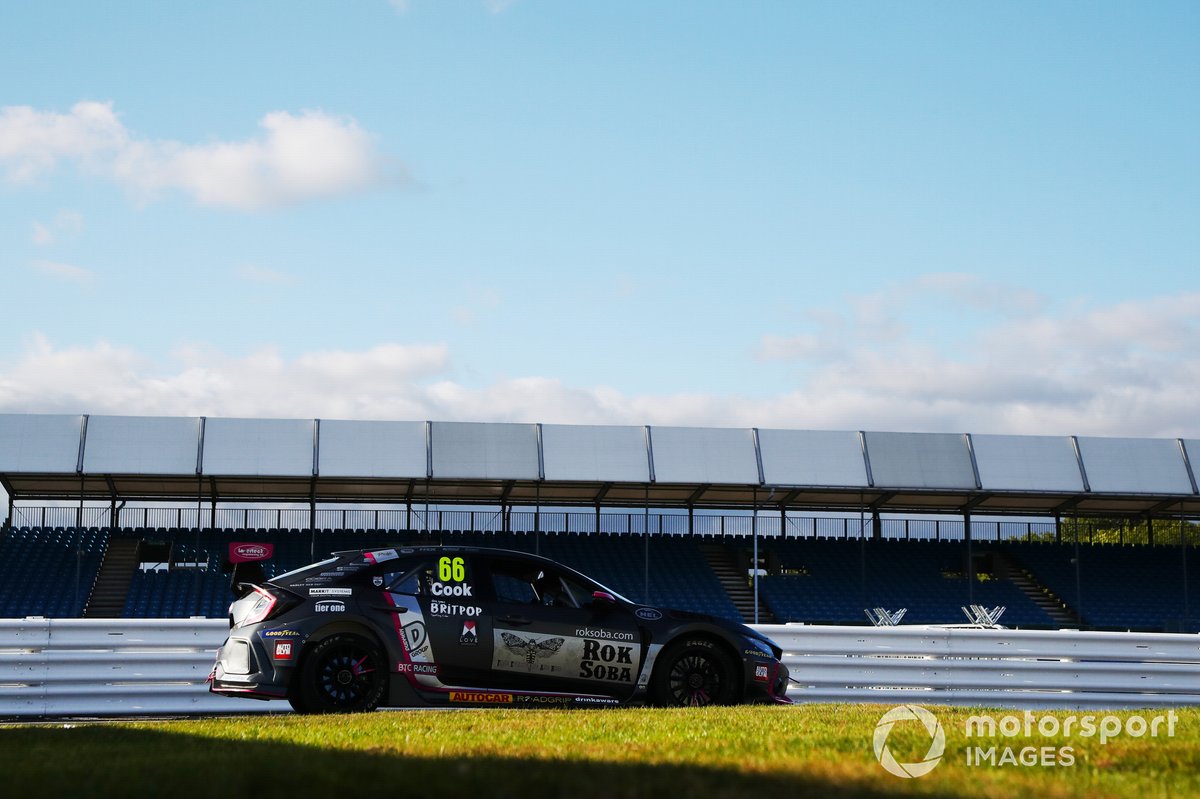 On the final lap Butcher appeared to have covered the line into Brooklands, only for Cook to go tighter still, bouncing over the grass and getting in front, only to run wide mid-corner.

“When Cook and Ingram battled I could build up a gap, but the safety car broke my rhythm twice, and I didn’t know what to expect with the weight,” said Butcher.

“On the last lap, I was almost on the grass [into Brooklands], never mind Josh! I opened the steering lock and let him go.

“What a feeling – we’ve got a 100% record all weekend [of topping both free practice and both qualifying sessions, plus winning twice].”

Ingram had a train of cars, led by Moffat, behind him after the second safety car, and the Infiniti fell prey to a great move by Colin Turkington with just over two laps to go.

The four-time champion, on 33kg of ballast, swooped his West Surrey Racing-run BMW 330i M Sport around the outside of Brooklands, and claimed the inside for Luffield.

Jake Hill, with success weight off his Motorbase-run MB Motorsport Ford Focus, set the third fastest lap (behind the hybrid Toyota of Andrew Jordan and the BTC Honda of Senna Proctor), and overcame the Power Maxed Racing Vauxhall Astras of Jason Plato and Dan Lloyd for 10th over the last two laps.

After the race, Cook was excluded from second place for failing the ride-height test.

He explained to Motorsport.com that the failure was due to damage incurred in his off-track trip while trying to pass Butcher on the final lap.

With the top 11 being reversed on the grid for the finale, Cook’s exclusion moves Lloyd up onto pole position.