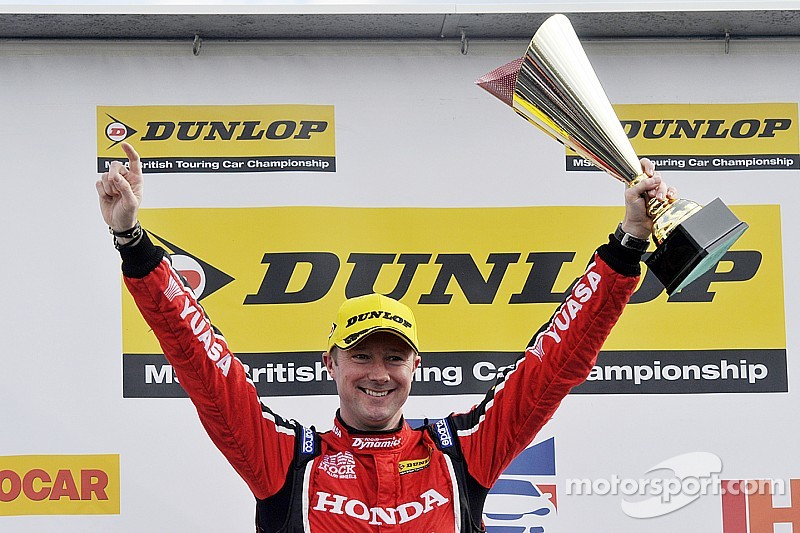 Gordon Shedden has praised the efforts of the factory Honda BTCC team following an unexpectedly strong debut race meeting for the brand new Civic Type-R, which took two out of a possible three wins last weekend at Brands Hatch.

After he and team-mate Matt Neal qualified the new cars only seventh and   11th respectively, Shedden was able to set the third fastest lap in the opening race and take victory in the second, before Neal delivered the team a second successive triumph in race three despite the Type-R's relative lack of testing mileage.

“It’s fantastic to get our first race wins with the new Civic Type-R this early on,” said 2012 BTCC champion Shedden, who lies five points adrift of championship leader Neal after suffering engine issues in race three.

Just three weeks ago, we didn’t have a race car complete, so the progress we’ve made in such a short space of time gives us a lot of confidence.

“When we say the car is late, it was so late to get on the track - I think I had done a maximum of 30 laps with the car before I arrived this weekend, which is nothing really.

“It’s a testament to everyone - just three weeks ago, we didn’t have a race car complete, so the progress we’ve made in such a short space of time gives us a lot of confidence. Once we get the thing dialled in, we should move forward as the year goes on.”

Shedden was also complimentary of triple World Touring Car Andy Priaulx, whom he beat by just 0.040s in an ultra-close drag race to the finish in race two.

“It was a cracking race with Priaulx, if a little scrappy in places,” said Shedden. “Photo finishes are what touring car racing is all about; for me it was just a case of putting my foot down and hoping that Honda power would get us to the line first.

“Andy is obviously a world champion, but coming back to the UK everyone thought it would take him a few rounds to get used to the rough and tumble of what goes on out there. But he’s definitely got his head round the pushing and the shoving already, that’s for sure.”

Jack Goff: I can fight for BTCC title