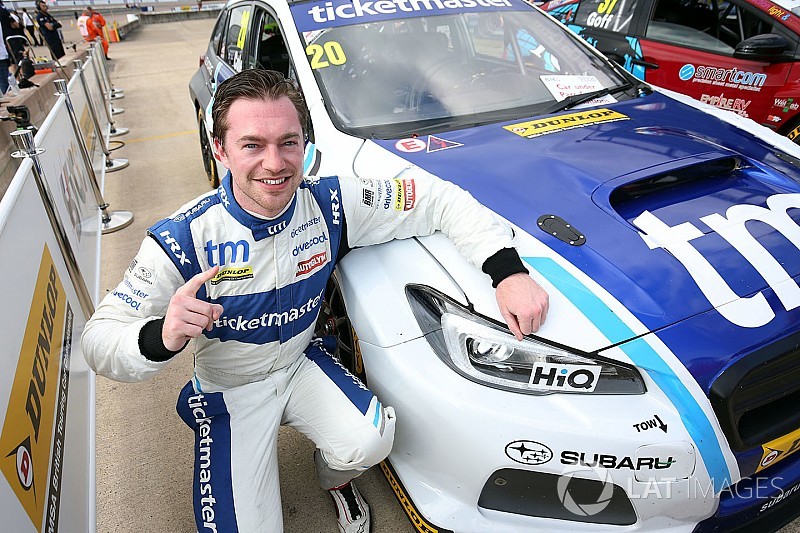 The Team BMR driver was never headed at the front of the field, preserving his lead in the early laps before stretching his legs in his Subaru Levorg to clinch a comfortable victory.

As Cole and fellow front-row starter Jack Goff slotted into first and second at the start, Colin Turkington - with an empty grid slot in front of him after Tom Ingram headed for the pits at the end of the formation lap - snatched third from title rival Ash Sutton on the run to the Deene hairpin.

That proved short-lived, though, as Sutton got a better run out of the hairpin when the pack bunched up and slithered his Subaru back up the inside of Turkington’s WSR BMW at Yentwood, with the MG of Josh Cook following him through into fourth.

The top four bunched in the opening laps but, after initially resisting the chasing pack, Cole began to pull away and had built a lead of more than a second by the midway point of the 16-lap race.

Goff offered a brief fightback but found himself increasingly occupied with Sutton and Cook behind, allowing Cole a comfortable run home in the closing laps.

The 2009 British Formula Ford crossed the line 2.571s clear of the pack to secure his first BTCC win.

Cole’s previous best finish in the championship was fifth place.

“I don’t want to say I’m speechless again, but I am,” said Cole. “I knew the front-wheel drive cars would be quicker at the start so it was just about containing them and then waiting for their tyres to go off.”

Goff looked like he would keep hold of runner-up spot comfortably enough despite pressure from his pursuers, but ran wide at the Tarzan hairpin on the final lap and allowed Sutton to power ahead off the corner to complete a Team BMR 1-2.

That result moves Sutton to the top of the drivers’ standings, three points ahead of Turkington.

Cook had a look at taking third at the final corner, but couldn’t force enough space on Goff’s inside and had to settle for fourth behind the Eurotech Honda driver.

Matt Neal forced his Team Dynamics Honda up the inside of Turkington at the Deene hairpin on lap three to grab fifth and held off any retaliatory attack from the BMW, who finished on his tail in sixth.

Mat Jackson advanced from 11th on the grid to finish a lonely seventh in his Motorbase Ford, ahead of Adam Morgan (Ciceley Racing Mercedes) and the third and fourth Subaru of Josh Price and Jason Plato.

Gordon Shedden, who remains in championship contention, was classified 30th and a lap down after suffering a front-right puncture towards the end of the race.