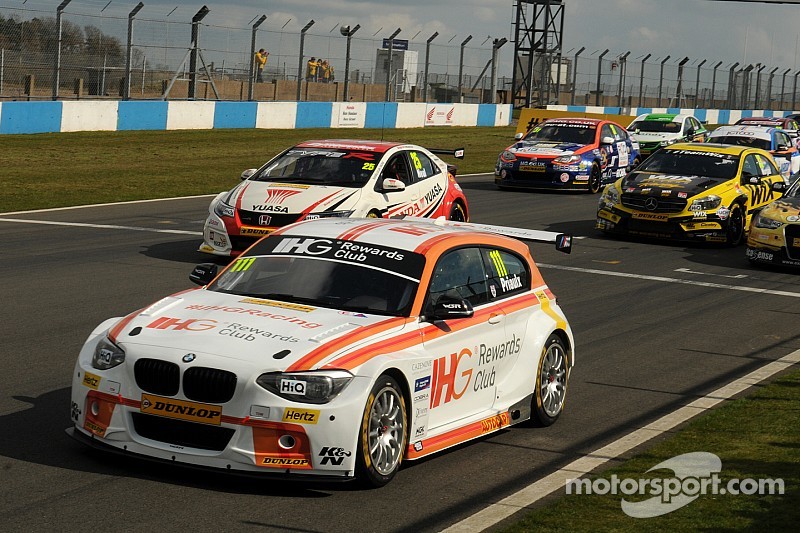 Three-time World Touring Car Champion Andy Priaulx has made an immediate impact on his return to the BTCC by claiming pole position for the season opener at Brands Hatch.

The West Surrey Racing driver set his fastest lap shortly after mid-session before a stoppage brought a halt to proceedings. Several drivers improved during a final ten minute shootout but couldn’t match the 48.411s pace set by Priaulx.

Aron Smith got the better of his illustrious Team BMR stablemates to take second, seeing off Jason Plato and Colin Turkington respectively – the latter of whom seemed to have his final flyer scuppered by traffic on the tight 1.2-mile Indy circuit.

This is my first pole position for a long time and I’m absolutely delighted.

The BMW trio of Sam Tordoff, Rob Collard and Priaulx initially held a 1-2-3 in the order but the VWs and Hondas soon entered the fray. It was Plato who first attacked for top spot but it was champion Turkington who set a time quick enough for provisional pole. Gordon Shedden joined the battle in the brand new Honda Civic Type R, running as high as third early on, although the squad’s challenge faded in the latter stages.

Collard held on to take fifth ahead of MG’s Jack Goff, who had endured an earlier spin. It had been a relatively low key day for the MG 888 Racing outfit but Goff’s late performance provided some relief for the reigning manufacturer champions. Team-mate Andrew Jordan, who had previously taken pole position in each of the last two season openers, could only manage tenth on his qualifying debut for the MG marque.

The mid-session stoppage was caused by Martin Depper’s Honda Civic, which had left the pitlane without one of its wheels correctly fitted. The Eurotech car trudged slowly towards Druids Hairpin before the wheel eventually came off, leaving the machine stranded close to the circuit. There were other off-track excursions for Dextra Racing’s Alex Martin and Power Maxed Racing’s Josh Cook, but both debutants recovered after trips through the gravel.

There was little doubting who would be grabbing the headlines, however, and that was Priaulx. Returning to the series following a 13-year hiatus, the Guernseyman now leads the championship for the first time in his career by virtue of the point awarded for pole position.

Andy Priaulx said: "I thought anything inside the top six would have been nice. We were taking nothing for granted – this is a top series but we’re happy to have made the most of it. I just went into the first qualifying session with a really good, positive feeling. I actually think we’re stronger in race trim, because the car in testing has lacked a little bit of maybe that ultimate one-lap pace. This is my first pole position for a long time and I’m absolutely delighted. That’s where I want to be. I think I’ve improved a lot as a driver over the last four years and now I feel that’s showing."

Aron Smith said: "I’m over the moon. This is the one qualifying session of the year that everyone really wants to come out on top in; everyone is on base weight and all things were equal. I’d be lying if I said I wasn’t nervous going into the session with the two big names alongside me, so to come out on top and to lay down a marker is something I’m really proud of. I’m feeling really good for tomorrow too. My race craft and race pace are really strong, so with a good set-up I’ll keep going in under the radar and surprising a few people. The hard part is done, we just need three good results tomorrow and we’ll see if we can be leading into turn one. Regardless we’ll do a good job."

Jason Plato said: "I’m having issues with power steering, and I honestly don’t know if we can get it sorted for tomorrow. It’s frustrating for me, but with my team hat on it’s been a really great session for the team. It’s a great debut for the new look Team BMR and that’s ace. We’ll try our best to put on a show tomorrow."

Colin Turkington said: "It’s a great result for me. First time with the Volkswagen, and I think we’re ideally placed. There were so many question marks in my head going into qualifying, and again for the first race tomorrow, but I think I’m in an ideal position and if I can tuck in behind the front row guys at the start, that will be perfect. Being on the second row always gives you a good chance for the race. I gave it 100 per cent, but the car is just a little bit tricky to drive for me at the moment; we’re still trying to tame it a bit more to my liking. It’s a work in progress, and we can only get faster from here."

Rob Collard said: "I’m really happy with that. To secure a top five position is good – I struggled a bit with qualifying last year but we’ve worked on it during testing to get the car just how I like it. The car is a bit easier to drive which is good with the mixed conditions today. If it’s a nice dry day tomorrow I think we’ll see people’s true pace. It’d be lovely to finish on the podium tomorrow – I like Brands Hatch and I’ve got a lot of support here this weekend so it would be great to get a result for them."