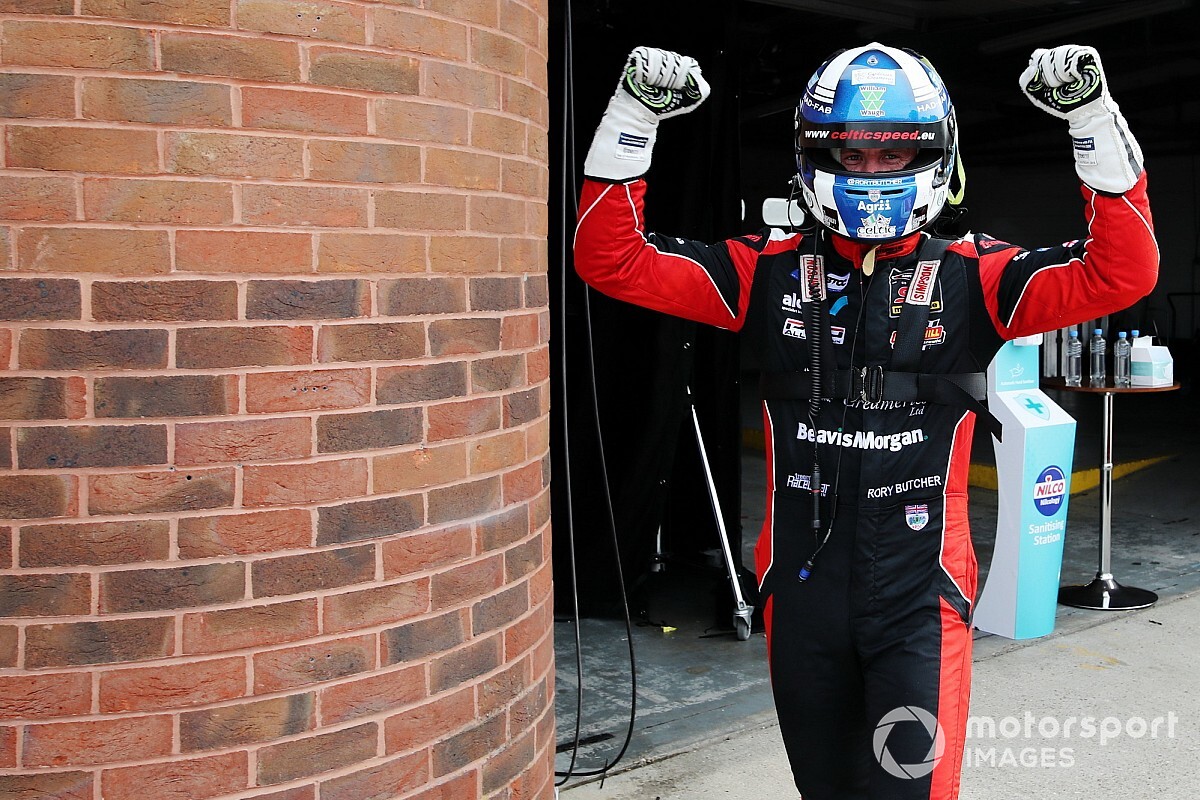 Butcher and his Motorbase Performance Ford Focus ST flashed across the line to take the top spot in the closing stages of the session just a few hundred metres behind Josh Cook, who in turn had just moved his BTC Racing Honda Civic Type-R to the head of the order.

Butcher’s performance, which came with 30kg of success ballast aboard the Ford, was enough to give him the verdict by 0.089 seconds over Cook, whose Honda is unballasted after a tough opening couple of rounds. The polesitting Scotsman himself has been out of luck of late, and is still seeking his first BTCC victory of the season after punctures cost him a race win last time out at Brands Hatch.

He led the way on the opening runs from the BMW of reigning champion and 2020 points leader Colin Turkington, but knew there was more time to come.

“I made the car work for myself there,” said Butcher. “I didn’t get the first two laps on the first run – I made a couple of mistakes and had to bail out of them, and then I put a banker in. On the second run my engineer was piling the pressure on over the radio, and I came out with pole again – fantastic.”

Cook, who set two laps good enough for the front row, believes he has a good race set-up on the Civic, and it was enough to beat the West Surrey Racing-run BMW 330i M Sport of Turkington, who is loaded with the maximum 60kg of success ballast.

Turkington’s team-mate Tom Oliphant actually set the third fastest lap, with 48kg of ballast on board, but the local man lost that time to track limits and will start Sunday’s opening race from eighth on the grid.

Joining Turkington on the second row is veteran Matt Neal, who will start his 699th BTCC race from one position ahead of Dan Cammish, his team-mate in the Team Dynamics-run official Honda squad. Neal, who is on 6kg of ballast, moved up the order late on to pip Cammish, who is on 36kg.

The older-spec FK2 Civic of MB Motorsport’s Jake Hill starts sixth – the AmD-run youngster had a quicker time deleted, but it was only 0.002s faster so makes no difference to his starting position. BTC Racing’s Tom Chilton made it four Hondas in the top seven, and will share the fourth row with Oliphant.

Adam Morgan (Ciceley Motorsport Mercedes A-Class) and Chris Smiley (Excelr8 Motorsport Hyundai i30) form the fifth row, despite Smiley shedding pieces of undertray across the track on the exit of Druids in a lurid late-session moment.

Title contender Ash Sutton had an eventful session in his Laser Tools Racing Infiniti, going straight on at the Island hairpin early in the running and having to plug on around the whole Oulton track layout, and then getting black-flagged late on because of track-limits offences. Sutton, who is running 54kg of ballast, will therefore have work to do on raceday once again, this time from 11th on the grid.

Another frontrunner further down than expected was Tom Ingram. The Speedworks Motorsport-run Toyota Corolla driver had a lap good for ninth deleted early in the session, and the following lap looked on a par with that before he collided at Lodge Corner with the backmarking Volkswagen of Ollie Brown, who to be fair was on a push lap himself.

Ingram didn’t get a decent run in later either, so will start 15th with 42kg on board his Toyota.