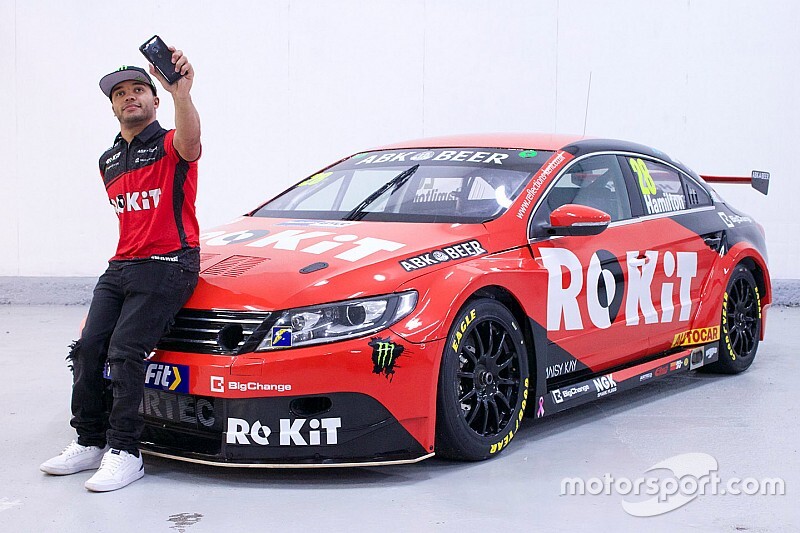 Nicolas Hamilton has secured a place on the 2020 British Touring Car Championship grid with Team Hard.

Hamilton, the half-brother of six-time Formula 1 world champion Lewis, will drive one of the outfit's Volkswagen CCs with prominent backing from the ROKiT telecommunications brand.

He will test the CC, which has been adapted for Hamilton as he has cerebral palsy, in Spain prior to next month's pre-season test.

Hamilton contested eight of last year's 10 BTCC rounds in a Motorbase Ford Focus RS, but missed the final two events of the year due to funding issues.

That was despite ROKiT stepping in to guarantee his budget for the Knockhill round last September following the withdrawal of another sponsor.

"I'm super-excited to be with Team Hard for the 2020 season," said Hamilton.

"Last year was so challenging for me. Coming close to facing a reality where my career might be over was really tough, but people stuck by me, kept me focused and upbeat and I'm now in a great place to start a new chapter behind the wheel.

"Team Hard is the most professional outfit I've worked with. The squad's tenacity, motivation and belief inspire me. The team deserves a great season from me and I'm going to give it my all."

Hamilton is the final driver announced at Team Hard for the 2020 campaign.

He is one of three drivers who will race Volkswagen CCs for the team, alongside Jack Goff and Mike Bushell.

Bushell admitted that being ready for the opening round at Donington Park at the end of March "is going to be a challenge" after he was airlifted to a cardiac intensive care unit when he fell ill while on a skiing holiday.

Carl Boardley is the other Team Hard driver, and will race a WSR-built BMW 125i M Sport.

Motorbase Performance will introduce the fourth-generation Ford Focus for the 2020 BTCC season.

The Focus, which has been available as a road car for a year, will replace the previous-generation RS model campaigned by the team.

Team boss David Bartrum said because Motorbase does not have official ties with the manufacturer "there is no real reason why we would go with Ford again", but added the latest model was "far from just a minor upgrade".

"Making a move to a new car for the BTCC is not a decision you can take lightly," said Bartrum.

"It's an expensive exercise and one which you need to get right from the off. This is a more difficult challenge as an independent team.

"Motorbase is one of very few teams who have taken on this task in NGTC-spec and built our own cars without an affiliation with a manufacturer.

"Now we're taking on the daunting task of designing and building our own new cars, once again without the support of the manufacturer."

Motorbase has announced Ollie Jackson and reigning Independents' Trophy winner Rory Butcher as two of its three drivers for 2020.