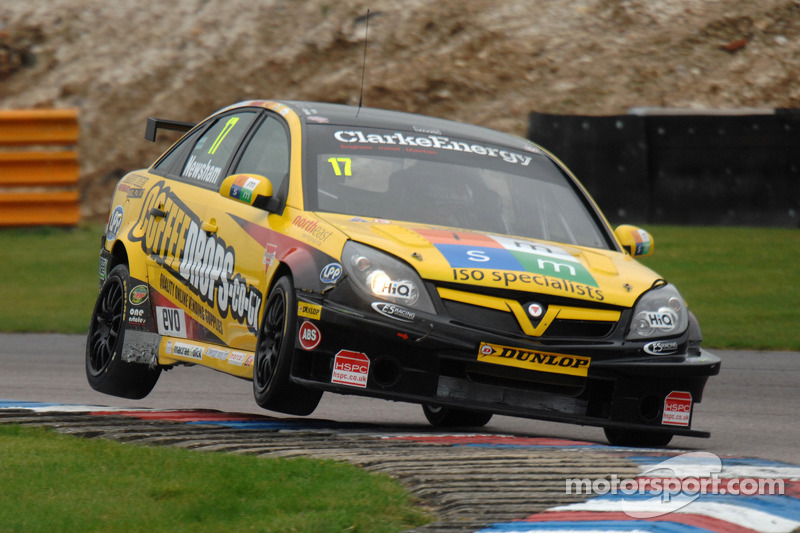 Dave Newsham, in his ES Racing Vauxhall Vectra, for the second meeting running has taken victory in the third race of the day at Knockhill during round 21 of the Dunlop MSA British Touring Car Championship.

Perhaps the real winner from race 3 was Honda Yuasa Racing’s Matt Neal who has retaken the lead of the championship thanks to his team mate not finishing; while there was more heartache for Jason Plato as he failed to start in his MG, after he suffered a reoccurrence of his power boost problem that he suffered at the end of race 2. 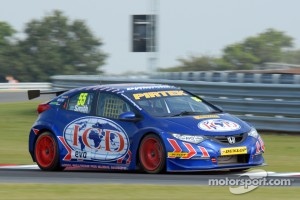 A light rain shower just prior to the start of the race made the circuit greasy but Newsham made the most of the reverse grid; the first time number 10 has been pulled out of the hat this season as he led the entire race to take his second career win.

After the race a delighted Newsham said, “I wouldn’t have thought that. We needed to do those lap times to win but I never thought we would. Tyres were finished at the end and I knew we would struggle so I just went for it at the start. We had a roll bar go in race 1 but the car actually went better without it. Its awesome and even better to win my home race.”

In second, and getting on the podium for the first ever time, was Jeff Smith in his Pirtek Racing Honda Civic. Jeff Smith drove brilliantly all race and, despite coming under race long pressure from Neal, didn’t put a wheel wrong. After the race the former Clio cup competitor said, “Its fabulous I’m ecstatic. The car was better than it’s ever been before. Mike (team boss Mike Jordan) on the radio did a brilliant job over the radio to keep me calm and not overdrive, defending from Matt who was coming up behind with lights on trying to get past and distract you.”

Despite not having a great weekend, Neal has now emerged from Knockhill with a 10 point lead in the series although he doesn’t quite know how, but admits with the boost regulations has some hard times ahead of him and said, “We are in the same machinery as Jeff and he didn’t put a foot wrong. Regulations prevented us from getting more podiums so it’s nice to get on the podium this weekend. The regulations can’t be changed anymore than they are now. Rockingham has a technical section, which is good for us but it’s got a great long straight. But we are going to get creamed at the second to last meeting at Silverstone and will be lucky to make the top 10. So after my weekend I’m amazed I’ve increased my lead as Jason’s had a rotter of a weekend and Flash has been driving like a demon. I thought I had a bad one but here I am.” 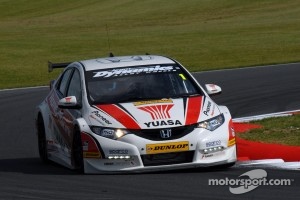 As for Gordon Shedden his race came to an end during a potentially dramatic moment on lap 4. Paul O’Neill had just got past Aron Smith in his Redstone Racing S2000 Ford Focus but as he tried to repass him, he slowed and Nick Foster in the eBay Motors BMW made contact with him. Foster got airborne over the kerbs and as Aron Smith half spun, Shedden was forced to take to the grass in avoidance but with grass getting sucked up and front bumper damage, had to call it a day shortly after.

Andrew Jordan took 4th in the second Pirtek Racing Honda Civic as he maintained his Independent champion lead, after two time race winner from earlier in the day, Rob Collard, couldn’t progress and only finished in 9th after he had clawed some points back earlier in the day.

Obviously the changes made after race 2 had worked for Tom Onslow-Cole as, unlike Collard, he was able to progress in his eBay Motors BMW and battled his way up to 5th.

Finishing inside the top 6 for the third time today was O’Neill standing in for Tony Hughes for Speedworks. Fan favourite O’Neill was without doubt one of the most spectacular drivers all weekend; he clearly loved his return to the series and hopes to be back fulltime next year and said, “It’s been amazing. I thought I was going to be on my roof every 5 minutes; it’s been brilliant. There will be no more Touring Cars this year unless Tony can’t make another race but I’m in talks with him about returning next year. I just need to get a quarter of the budget and I’ll be on the grid but I love the series; this is what I do best and I do miss it.”

Foster eventually finished in 7th ahead of Aron Smith, who was earlier penalised for his part in the Plato incident in race 1 getting a fine and penalty points; although Plato’s team Triple 8 feel that the penalty wasn’t harsh enough and have appealed.

As for Plato he now trails Neal by 36 points and after scoring just 5 points all day after getting pole position said, “We just need to get to the bottom of this problem. We’ve lost all boost. It happened towards the end of race 2 but you don’t know until you get these turbo cars on track whether your going to get the boost. That’s just how it is. I have had better weekends.”