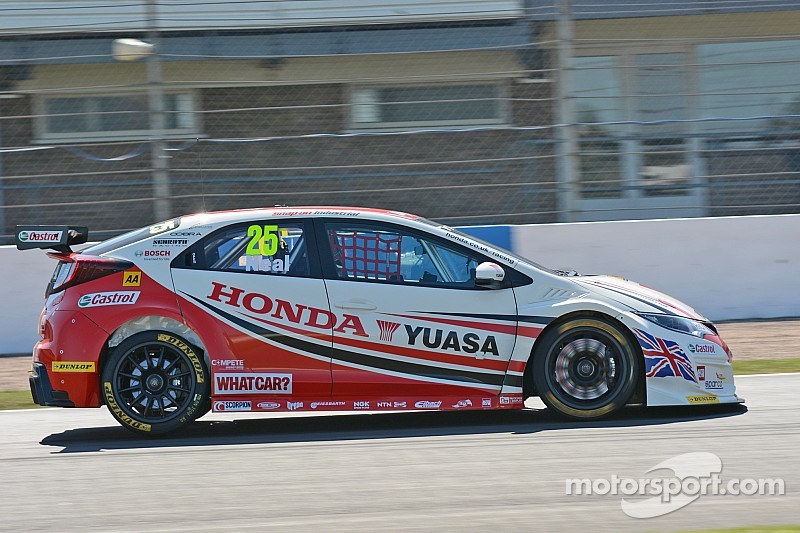 Matt Neal took his second BTCC win of 2015 in the final race of the day at Donington, fending off Andrew Jordan in the closing laps after the pair emerged from a frenetic multi-car lead tussle.

The pair were split by just 0.157s at the flag, having earlier made contact in the midst of an intense battle for the lead that raged in the closing stages.

There was action aplenty from the very outset, with Rob Collard’s West Surrey Racing BMW leading the early running after outdragging the Chevrolet of poleman Josh Cook to the first corner.

But, despite being in only his second BTCC race weekend, Cook was not to be dispatched so easily, the 23-year-old sticking to Collard’s tail before finding a way back through at the chicane on the third lap.

Cook held the lead from Collard until a mid-race Safety Car period precipitated by Jack Goff’s Triple Eight MG making contact with Sam Tordoff’s BMW at the chicane in the middle of a lengthy train of cars, the result of which was both drivers winding up in the barriers and out of the race.

When the race got back under way, Team BMR’s Aron Smith – up from 12th on the grid to third by the time of the caution period – scythed underneath Collard for second and began to challenge Cook’s lead.

Under immense pressure from the Irishman, Cook defended his advantage resolutely, but the duo ended up coming to blows coming down the hill towards the Old Hairpin, putting both cars on the grass and seemingly on a collision course with the chasing pack – but both Cook and Smith miraculously got back on track without hitting anyone.

That put Collard back in the lead from Neal, Jordan and the second Honda of Gordon Shedden, up from 14th on the grid, but with the BMW’s soft tyres degrading, Neal was able to make a decisive pass at Redgate with two laps to go.

Jordan followed through at the Old Hairpin as Collard began to struggle for grip, gently nudging Neal in the process, the works MG driver remaining stuck to the Honda’s rear bumper for the remainder.

But double-waved yellows at the chicane for the final two laps ensured that there was nothing Jordan could do to prevent Neal from becoming the first repeat winner of 2015 and taking a third victory for the new Civic Type-R in just six races.

Shedden completed the podium in third after passing Collard on the final lap, while a terrific scrap over fifth place was won by Aiden Moffat’s Mercedes, narrowly ahead of Smith and Cook, who held the place after his grass-tracking moment before dropping back.

The soft tyre-shod Volkswagen of Jason Plato was bumped back to eighth amid the action, with Martin Depper’s Honda and Tom Ingram’s Toyota rounding out the top 10 finishers ahead of race two winner Colin Turkington, who struggled with soft tyres and ballast in his BMR VW.

BMR says it is the equal of BTCC works teams