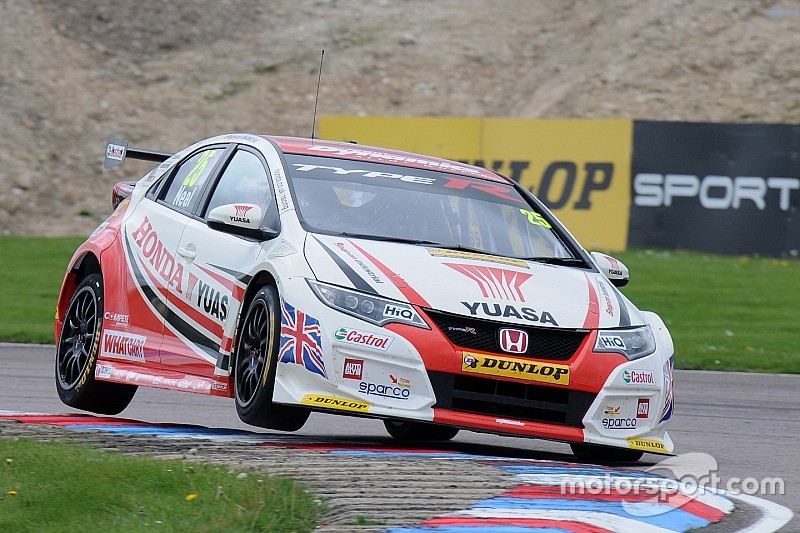 Matt Neal made a late move to take victory in the final BTCC race at Knockhill, denying a hitherto dominant Adam Morgan in the process.

Morgan claimed pole position after two-time series champion John Cleland drew number 10 in the reverse grid draw, and the Mercedes driver seemed to be driving to a simple victory.

However, with just two laps to go, Morgan picked up a large piece of debris on the front of his car, allowing Neal’s Honda Civic Type-R to close in.

Knowing he had a very limited amount of time, Neal made his move on the next lap, diving inside at the hairpin and holding off Morgan for the final 1.2 mile tour of the Scottish track.

The first quarter of the race seemed to be heading for a Mercedes one-two as Aiden Moffat followed Morgan around the track in his own A-Class, but it was only a matter of time before he was reeled in by Neal.

Behind the top three, championship leader Jason Plato was desperately trying to keep the West Surrey Racing BMW of Andy Priaulx at bay. Priaulx finally made his way through on lap 15, forcing Plato wide into the hairpin and setting his sights on Aiden Moffat in the final podium position.

It took the remainder of the race, but Priaulx finally took third on the final lap, albeit through a controversial move at Scotsman corner. The result was later overturned by the officials, promoting Moffat to third and his first BTCC podium.

Plato would finish the race in sixth, eventually losing his top five finish to the on-form Rob Austin in the Audi A4, taking three very strong points finishes on a weekend when his absent teammate Hunter Abbott became a father.

Meanwhile, a race long battle saw Triple Eight MG's Andrew Jordan hold back the challenges of Honda’s Gordon Shedden and Motorbase’s Mat Jackson for seventh through to ninth, while Martin Depper rounded out the top 10 in the Eurotech Racing Honda Civic.

Elsewhere, West Surrey Racing had a race to forget, with both Rob Collard and Sam Tordoff going off track with damage almost within a lap of each other, while Team BMR’s nightmare day ended with Colin Turkington in 15th, Aron Smith in 17th and Warren Scott non-finishing.