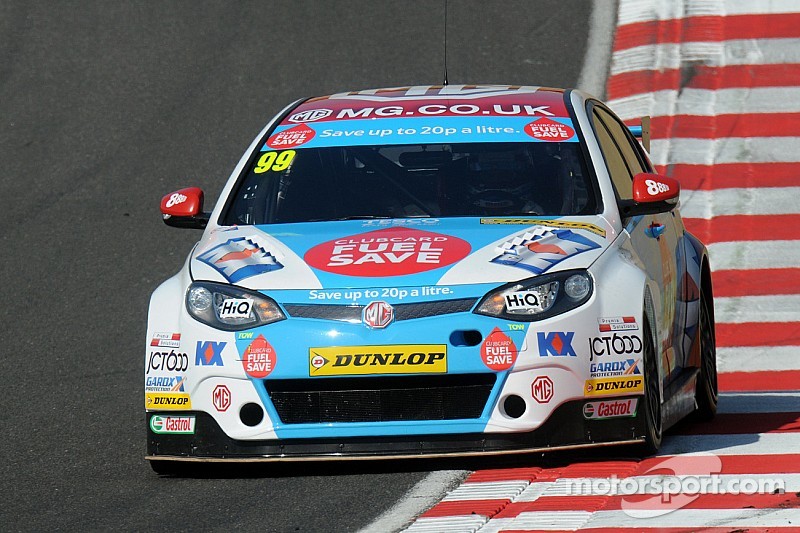 BTCC title to go down to the wire as MG's challenger hunts down points leader Colin Turkington.

MG star Jason Plato produced the goods by topping the final qualifying session of the 2014 Dunlop MSA British Touring Car Championship in a quite breathtaking battle at Brands Hatch.

Starting in wet conditions following an earlier storm, Plato timed his run perfectly as the circuit dried in the latter stages. The championship contender clocked his brilliant benchmark shortly before red flags ended the session with just over two minutes remaining.

A number of drivers were also set to record quicker lap times, but it simply wasn’t to be as Dave Newsham lost control of his AmD Ford Focus at Sheene Curve, leaving his machine beached in a dangerous position.

If Colin [Turkington] is behind me then I’m not interested in what he’s doing, but if he’s in front of me that makes him enemy number one and I’ll drive accordingly.

All 30 competitors began the session with wet Dunlop-shod tyres and it was Honda Yuasa Racing’s Matt Neal who set the ultimate time on treaded rubber. Whilst Neal was sitting in provisional pole, Team BMR Restart driver Alain Menu was busy becoming the first driver to set a representative time on Dunlop Sport Maxx medium compound tyres.

It didn’t take long for the Swiss racer to hit the top of the time sheets, sparking a flurry of activity up and down the pitlane. The big guns were switching to slick tyres soon enough, setting up an exciting final ten minute showdown.

Plato had his own moment at the daring Hawthorn Bend, doing well to save his MG6 in the process, but the double champion immediately went on to set his impressive pole position lap. He, like several others, was on an even quicker lap the next time around, but Newsham’s session-ending spin scuppered any chance for improvements.

I feel much more relaxed now that I’m here at the track – we’re all set for tomorrow now and it's a huge day ahead.

The red flags will have been fondly greeted by Adam Morgan as the WIX Racing star went fifth in the final moments of action, securing his best qualifying result of the season. Airwaves Racing’s Fabrizio Giovanardi also enjoyed his best run of the campaign in sixth, as did United Autosports James Cole in an impressive seventh.

Mat Jackson was next up ahead of eBay Motors driver Nick Foster, whilst Newsham rounded out the top ten despite his spin.

It's all-eyes on the championship showdown, however, with Plato giving himself the best possible chance of clawing back the 50 point deficit to standings leader Turkington on finals day tomorrow. MG is also targeting the much coveted Manufacturers' title with the British marque currently holding the advantage over Honda.

The final three races of the season are likely to produce many thrills and spills as the BTCC's 2014 champions are crowned. The action will unfold in front of a huge trackside audience at Brands Hatch with many more watching live action throughout the day on ITV4.

Jason Plato said: “Drivers always relish those conditions because it’s not about car set-up it’s about the bloke behind the wheel giving it a go. I love it when it’s like that, it’s a trip into the unknown and until you’re in the middle of the corner you don’t know what you’re going to get. I had a massive moment on my pole lap at Hawthorns where I bit off substantially more than I did before and it bit back – I was sideways in the middle of the road doing 120mph! That tends to focus your mind a bit.

“We can control things from where we are now, the game plan for this weekend is to win some races and to finish. We’ve got to take the Manufacturers’ championship for MG. If Colin [Turkington] is behind me then I’m not interested in what he’s doing, but if he’s in front of me that makes him enemy number one and I’ll drive accordingly.”

Sam Tordoff said: “It was very difficult – it’s always tricky with tyres when it’s like that. Going out on brand new slicks when it’s damp and trying to get heat into them is the key and I think we left it just a bit too late – Jason just had the extra lap on us. Still it’s another great one-two and we did the job for MG. We’ve got the pace wet or dry tomorrow, I’m very happy with the car the way things are and we’ve just got to get off the line well and get three good results tomorrow.

“I think we’re the car to beat around here – Colin [Turkington] will probably push forward in the race and had it been completely dry I think he’d have challenged for the front row, but we’ve given ourselves the best chance and it just needs to go our way when the lights go out. It’d be fantastic to be a part of history and win the Manufacturers' title for MG – it’s important to everyone. Honda have been a dominant force in recent years and if we can be the ones to break that then it's a credit to everyone involved.”

Colin Turkington said: “I think everyone needed the last few minutes of that session, but I’m delighted with where we’ve qualified today. Of course it would have been better to be on pole, but when conditions are like that it really is luck of the draw where you end up – depending on when the session ends we could’ve been fastest or we could have been outside the top ten! We knew the pace was in the car after FP2 – in wet and dry we’re in a good place.

“I got on the slick tyres quite early and tried to build the temperature – like everyone else it was all about timing. There was plenty more left in the BMW but I’m still pleased to be at the sharp end. I feel much more relaxed now that I’m here at the track – we’re all set for tomorrow now and it's a huge day ahead.”

Gordon Shedden said: “It was so tricky because the two parts of the track are drying at a different rate, so you had to drive with two heads on – one for the Indy circuit and on for the GP section. I think I was the first to jump onto the slick tyre and it was the right choice – the car felt fantastic and I thought we were in a great place timing it just right to be on fresh tyres at the right time, but then obviously the red flags came out and that was the end of that.

“I genuinely felt that we had a bit more in the car, but on the flip side qualifying P3 is a lot higher than we’ve been for the last few. I’m desperate to try and win tomorrow, or at the very least finish on the podium. It’s going to be hard, but I don’t have a drivers' championship to worry about so I’m just going to go out there and try and do the best job that I can for Honda.”

Adam Morgan said: "I’m happy that it dried up a bit because we were struggling in the wet early on, but I’m happy to get our best qualifying of the season. The team did a great job to get everything ready at the right time to set a quick lap when it counted – I think the forecast is dry which is good for us so I'm looking forward to it. I am desperate for a podium – it would be an awesome way to finish the season. Obviously there’s a championship to be decided, so I’m not going to do anything to upset that, but if I can push for a podium then I will.”