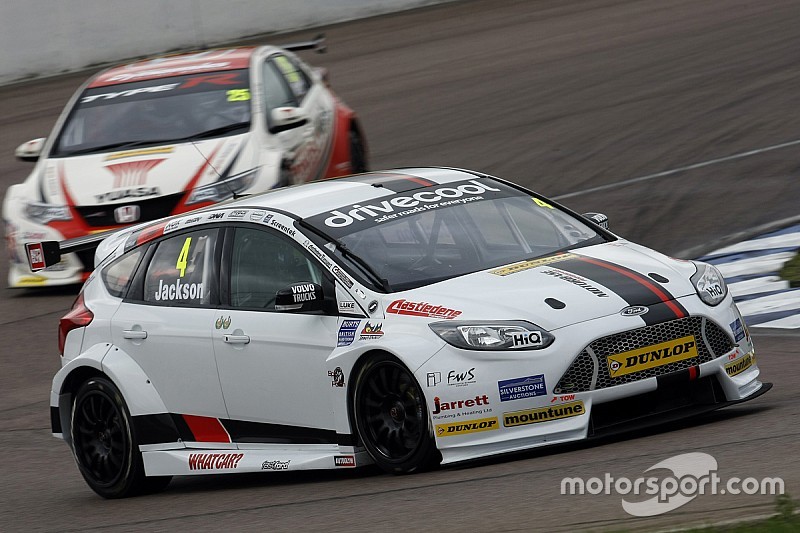 Mat Jackson led convincingly from lights to flag to take his and Motorbase Performance’s first BTCC win of the season in race one at Rockingham, with Honda’s Gordon Shedden finishing second to take the championship lead.

Jackson made a clean start from pole position and was never seriously troubled by Shedden, who made swift forward progress from seventh on the grid to take the runner-up spot, just under two seconds behind.

But there was strife for pre-race series leader Jason Plato, whose Team BMR Volkswagen CC suffered broken suspension after contact at Yentwood on lap one, and finished two laps down after pitting for repairs.

Plato’s team-mate Aron Smith held off the attentions of Triple Eight Racing’s Jack Goff to take third, with Speedworks Motorsport’s Tom Ingram next up in fifth.

Andrew Jordan made good forward progress in the second MG6 GT to take sixth ahead of Team BMR’s Colin Turkington, with Shedden’s team-mate Matt Neal dropping from fifth to eighth with a front right puncture on the final lap. Adam Morgan and Sam Tordoff rounded out the top 10.

After a clean start which saw Ingram fall from fourth to seventh, Plato was quickly removed from the action as he skated across the grass towards Chapman, and limped back to the pits with a crabbing car.

Shedden was swiftly on the move, passing Goff at Tarzan on lap two and Smith at Deene on the fourth tour, as Plato rejoined the race after repairs.

Goff and Neal then had an entertaining battle, with Neal forcing his Honda Civic Type-R up the inside of Goff at Tarzan, only for the MG6 to fight back and retain the position at Brook.

Heading towards half distance, the soft tyre runners started to struggle. Ingram passed the fast-starting Power Maxed Racing Chevrolet of Josh Cook with a neat switchback at Chapman on lap seven, before Kieran Gallagher’s race ended in the barriers at Yentwood on lap 10 after contact with Team Parker Racing’s Alex Martin.

Jordan passed the similarly soft-tyre shod Moffat at Deene on lap 12, with Turkington also following past, before Warren Scott suffered terminal damage in a clash with Adam Morgan at Tarzan.

Jordan and Turkington passed Cook on lap 13 before Moffat went off into the gravel at Tarzan, putting pay to his excellent qualifying performance, before both James Cole and Dave Newsham relegated Cook to 13th.

Back at the front, Shedden chipped away at Jackson’s lead but the Ford Focus man had the gap under control, crossing the line 1.832s to the good.