British Touring Car Championship star Tom Ingram will line up in a Hyundai this season at the start of what has been described as a “multi-year agreement” with Excelr8 Motorsport. 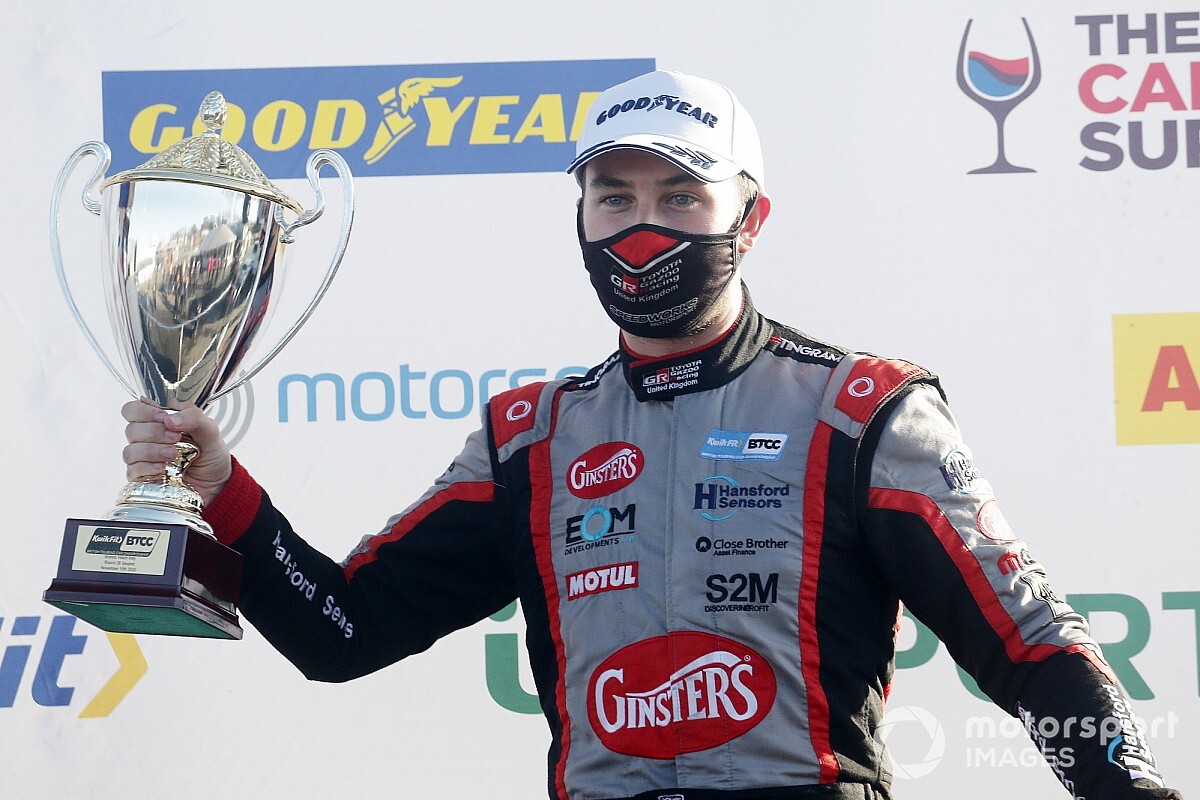 Commercial considerations were at the root of the split, with Ingram carrying personal backing from Cornish pasty giant Ginsters and Hansford Sensors, and Speedworks aligning its livery more closely with Toyota Gazoo Racing as part of an expanded two-car effort.

Instead, Ingram will spearhead the now-four-strong squad of Hyundai i30 N machinery under the banner of Excelr8 Trade Price Cars, with 2020 Excelr8 podium finisher Chris Smiley and BTCC sophomore Jack Butel named for two of the other seats.

Ingram says that BTCC wins record holder Jason Plato has been an inspiration in plotting his own career.

“For me, Jason Plato has always been the blueprint in the BTCC,” he said.

“The mentoring I received from him as part of the KX Akademy just under a decade ago transformed the way I approach my racing.

“In focusing on building his brand, he has proved how it is possible to forge a truly tangible, long-lasting career in British motorsport both on and off-track, and I would like to think I could see myself in his shoes another decade or two down the line.

“With that in mind, it’s great to have the security of a multi-year agreement, especially in the current climate.

“This is a long-term commitment on both sides, which means we know where we stand moving forward and gives us the opportunity to really grow together and establish Excelr8 as a bona fide front-running team.

“The Hyundai has developed significantly over the past year, and it goes without saying that there’s a lot more potential – and pace – still to be extracted.

“It has almost the perfect body shape and wheelbase for the BTCC, blending the best attributes of the Toyota Corolla and Avensis that I’ve driven before, so I will be very surprised if we’re not a genuine contender for the championship this season – both the Independents’ title and the main one.”

Excelr8 co-owner Justina Williams added: “I have admired Tom’s car control, racecraft, fan engagement, media skills and commercial acumen for a number of years, even before we entered the BTCC, and have always regarded him as a top-drawer choice of driver for our team.

“I’m super-excited for 2021 and beyond, with the highest level of optimism about what we can achieve with Tom on board.”

The Hyundai was built for 2020 with design input from top BTCC engineer Kevin Berry, who previously had stints at Triple Eight, West Surrey Racing and Team BMR.

But Berry was forced to stand down from his engineering role for the majority of BTCC rounds due to quarantine requirements emanating from his job running World Touring Car Cup champion Yann Ehrlacher’s Cyan Racing Lynk & Co.

“Having someone like Kevin in the team is super-exciting because he has a vast wealth of knowledge,” Ingram told Motorsport.com.

“A split view on what we’ve done [at Speedworks] and what he’s done is really exciting ­– it seems all to be falling into place very nicely to be a very very good package rather than just a good package, so I can leave Speedworks winning races and join Excelr8 winning races.”

Ingram is also looking forward to having teammates for the first time in his BTCC career.

“Chris and myself used to race each other when we were 12 years old in karts, when I won the British championship and Chris was right up there,” he said.

“We’ve had a few battles, we’ve had disagreements, but I don’t think we’ve ever fallen out, but you can say that about anyone in touring cars.

“From the time I’ve spent at Excelr8 so far, I know that Chris’s preference is very similar to mine from a car set-up point of view, and he’s quick – he can definitely hustle a result out of the car.”

Ingram added that he is hoping to get behind the wheel of the Hyundai by the end of February, depending on the lockdown restrictions.

It is unclear whether Senna Proctor, who equalled Smiley’s best result of a reversed-grid second during the Hyundai’s maiden season, is in contention for the remaining seat at Excelr8 – he has been on the driver market over the winter.