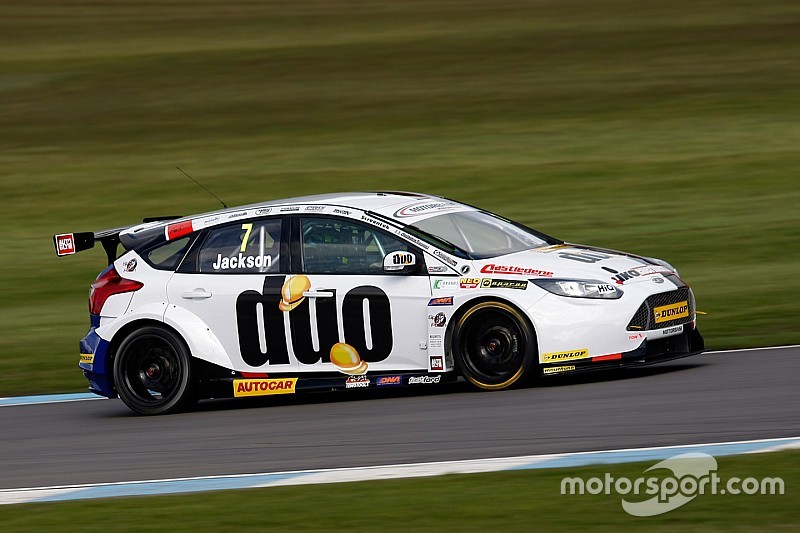 Mat Jackson cruised to victory in the opening race of the Donington Park weekend, as a fire for Team BMR’s James Cole ended the race under red flag.

Starting from the front row, both Triple Eight Racing drivers Ashley Sutton and Josh Cook struggled off the line, allowing the fast starting Mat Jackson to jump to the top of the field in his Motorbase Performance Ford Focus.

A typical lightning fast start for Rob Collard saw the BMW jump into third position behind Jackson and Cook, taking to the grass to blast past Sutton’s slow-starting MG6, but a fightback from Sutton at the Old Hairpin put Collard back to fourth half a lap later.

The race came under a temporary halt at the end of lap one for an incident involving Warren Scott and Ollie Jackson at Redgate, and once the race restarted a lap later, it was plain sailing for Jackson from then on.

The top places remained fairly stationary for the race, with Tom Ingram a regular fixture in Sutton’s wing mirrors before making his move up to third on lap 11.

The loss of momentum for Sutton saw the MG driver drop down to sixth in the space of a lap.

Sutton, Collard and Jack Goff battled for the remaining places in the top six, with Goff winning the battle on track, before Sutton pulled off a great move on Collard going through the Craner Curves on lap 14 to secure fifth position.

The second safety car was then deployed on lap 15 for an incident between Matt Simpson and Dan Welch, resulting in the latter having some heated words with Simpson in the gravel trap.

Meanwhile, Cole’s Subaru Levorg came down the start straight with flames pouring out from under the bonnet before pulling over at the pit exit and Cole making a hasty exit from the car and bringing out the red, and subsequently the chequered flag.

Sam Tordoff pulled off an impressive recovery drive to finish ninth after starting in 21st, while Andrew Jordan worked back up to 14th from 25th on the grid.

Colin Turkington took a top-10 result in the new Subaru Levorg, which was visibly less powerful down the straight than its rivals.

While the Team Dynamics Honda pair of Gordon Shedden and Matt Neal struggled on the soft tyres, finishing 11th and 12th respectively.