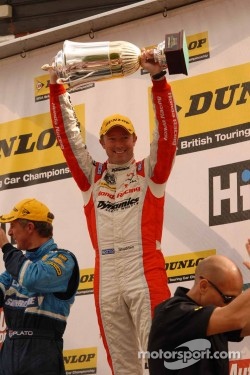 Gordon Shedden will arrive at his home circuit of Knockhill this weekend (3-4 Sept) knowing he’s now the most successful Scottish driver in terms of race wins in the history of the Dunlop MSA British Touring Car Championship.

Fife racer Shedden’s latest victory, achieved at the Snetterton circuit in Norfolk in early August (pictured), was the 18th of his career – one more than John Cleland who won the BTCC title twice in 1989 and 1995. Other Scottish greats to have tasted race victory in the BTCC since its inception in 1958 include Anthony Reid (15 wins), David Leslie and Tom Walkinshaw (9) and, Champion in 1964, Jim Clark (8).

Shedden, from Dalgety Bay, will go into his home event lying second overall in the current BTCC standings. He briefly led the table – the first time in his career that he had done so – after the second of three races at Snetterton only to then slip behind Airwaves Ford driver Mat Jackson in the third. Breathing down their necks in the chase for the title are double champions both, Shedden’s Honda Racing team-mate Matt Neal and Silverline Chevrolet’s Jason Plato.

Shedden, aged 32, told btcc.net : “To have beaten John’s tally is very special – he was my childhood hero when I came to watch the BTCC at Knockhill as a kid in the Nineties. In fact he was a hero for the whole of Scotland – every household knew his name. But while the wins record is nice, John is still two championships up on me so I’ve got some way to go yet before I can genuinely say I’ve equalled his achievements.

“Obviously I’ve got myself into a great position for this season. A lot of that is down to much greater consistency in terms of finishes and picking up the points. Of course I want to win each race but sometimes you have to take what else is on offer.”

Indeed Shedden will arrive at Knockhill eight points adrift of leader Jackson. That is nothing by BTCC standards considering there are 15 points awarded per race win and some 12 races still to go this season (with three each at Knockhill, then Rockingham in Northants, Brands Hatch in Kent and, finally in mid-October, Silverstone in Northants).

Shedden added: “No one driver is going to win the title at Knockhill this weekend but they could easily lose it – just look how quickly it turned again at Snetterton where I led the thing for about two hours! After all there’s more than a third of the season – 12 of the 30 races – still to go and my season isn’t wholly dependant on a ballistic weekend at Knockhill.

“I actually think the Chevrolets of Jason and his team-mate Alex MacDowall will be dynamite around Knockhill – the Chevrolet is lighter than our Civic and Jackson’s Ford. The top five in the championship will all start the weekend with success ballast in their cars whereas MacDowall will have zero ballast so he should qualify on pole position and win race one.

“But it will ebb and flow throughout the three races on Sunday as the ballasts are shifted about according to people’s finishing positions in each race. That always keeps the racing close – it’s a trademark of the BTCC – and at Knockhill, because of the track lay-out, this is usually one of the closest and most unpredictable days of the season.

“It’s easy to say because I compete in it but, looking at other sports or events, I’d have to say the BTCC makes for one of the most exciting family days out imaginable. The racing is sensational and it’s all done in cars that look like the family saloon or hatchback. The crowds are huge, the atmosphere is always electric and the other big bonus for the public is that they can meet the stars of the show with autograph sessions and an open paddock. Plus at Knockhill you can get so close to the edge of the track you can literally touch the cars… a bit different from Formula One.”

BTCC: Jordan to give BTCC hybrid race debut next month

Rolling back the BTCC years at Brands Hatch