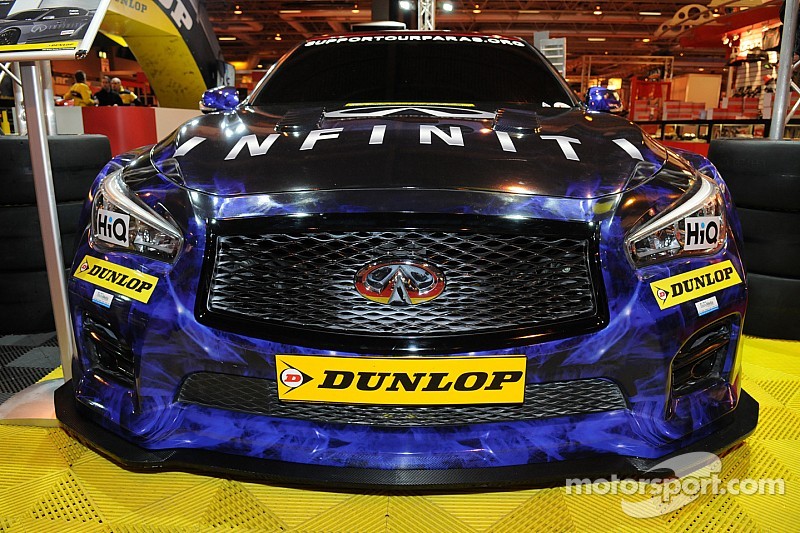 There were certainly many at the Autosport International Show.

The first public unveiling at the Autosport International Show was Aiden Moffat with his Laser Tools racing Mercedes A Class, built by Ciceley Racing with whom they linked up with at the mid-point of last season. Moffat became the youngest driver in history to enter the series when he made his debut in 2012 at his home track at Knockhill. Moffat will now enter for his second full season having made the switch from the Chevrolet Cruze he raced last year.

Next to unveil was Mike Bushell who will race with AmD Tuning.com. The reigning Clio Cup Champion, who has previously raced once in the series at Knockhill in 2013, was on hand with team boss Shaun Hollamby to take the sheets off their Ford Focus last year piloted by Dave Newsham.

Next up was the major announcement and unveiling of the day when Triple World Touring Car Champion (WTCC) champion Andy Priaulx announced his return to the series with West Surry Racing. Priaulx made his debut in the series during a one off race in 2001 racing in the Satellite Works Vauxhall team where he took a double pole and 2nd at Oulton Park. The following year he made his sole full season to date in the Championship, racing for Honda, taking one victory along the way.

Since then the Guernsey man has solely raced BMW’s taking the European Touring Car Championship and three WTCC titles whilst he has also raced for BMW in the DTM and in various Le Mans Endurance series as well having done some F1 testing for Williams BMW and then Sauber BMW.

Priaulx will race with the number 111 in recognition of his three WTCC crowns and unveiled his new racer on the main Autosport stage alongside team boss Dick Bennetts. Speaking about his return to the series Priaulx said, “I am very excited about 2015. To have the opportunity to race again in the UK with my long-term partners IHG, alongside race and test programmes in America and Europe, is going to be a lot of fun. The BTCC is one of the strongest touring car championships in Europe and unfinished business for me. I am looking forward to joining West Surrey Racing in their Championship winning BMW 125i M Sport and working with Dick Bennetts, whose engineering success speaks for itself.”

Bennetts is also delighted to have secured a man he has admired for a long time and said, “What can one say… to have Andy Priaulx and IHG join WSR for the BTCC in 2015 is a real privilege. I have known Andy for many years, so to have him – a three time World Touring Car Champion – in one of our BMW 125i’s is fantastic news, not only for WSR but the BTCC as well.”

That wasn’t the only WSR BMW on display at the show with Colin Turkington’s eBay Motors car on display with the number 1 on its window at the K and N stand. This however could be the only time we see Turkington and number 1 on the BMW this year or in fact in the BTCC in 2015. With eBay Motors departure Turkington’s future remains unclear although the team are trying to find the budget to run him in the third car alongside Priaulx and other confirmed driver Sam Tordoff.

The eBay trio and their uncertain futures

Should Turkington fail, Rob Collard who has driven for the team since 2010 has stated he has the budget in place but the deal all depends on the Turkington situation. One driver that we will definitely not see in the BTCC or WSR is Nick Foster who, after four years with the team, has announced his departure from the series.

Other cars featured on the BTCC stand included Rob Austin’s Audi A4 and the Infinity Support Our Paras Racing appearing for the first time in livery. Austin confirmed on the Autosport stage that he will once again race his fans favourite Audi A4 nicknamed Sherman alongside a second car appearing in a different livery. Infinity will be a full works team entered by Pro Motorsport driven by Derek Palmer and Richard Hawken raising money for injured paratroopers and incorporating them in the team.

The final car on the Dunlop BTCC stand was the Honda Yuasa Racing Civic Tourer. Both drivers Matt Neal and Gordon Shedden were at the show and although no official announcement was made it was confirmed that Shedden has signed a deal to remain with the team until 2017 with both Honda and Neal also in place for 2015. What car they will drive this season has however yet to be confirmed although they did announce that it won’t be the Civic Tourer from last season and with the brand new Civic Type R set to hit the British roads in 2015 it remains the red hot favourite. Whatever they go with the team have stated that it probably won’t hit the track until late, with early March being a realistic target although they are set to test new engine developments before using the Civic Tourer.

Dotted around the show there were also a number of other BTCC cars. Adam Morgan’s Wix Racing, Ciceley built Mercedes was on show and will be returning following his maiden win during the final meeting of the year, while there was also both Speedworks stabled Toyota Avensis’ on show. The main Speedworks team have yet to confirm their driver for the season while the second Avensis belonging to Handy Motorsport who receive assistance from Speedworks have confirmed that Simon Belcher will be back out for his second season and he confirmed that he will get the latest spec Avensis following the first meeting of the year.

As well as the unveilings a number of drivers will take to the main stage to speak about their 2015 plans over the weekend. The biggest BTCC star to take to the stage during day one was Jason Plato. As yet the most successful driver in BTCC history for wins has yet to sign a deal for 2015 but says he is close and he will be back following his departure from MG. When asked the question Plato said, “Yes, I think I will be on the grid, I’m working on a couple of very interesting programmes at the moment and I would imagine in the next three weeks we’ll choose a direction to go in and announce something.”

Following the two trade/Media days the show will now open its doors to the public for two days over the weekend. During these days even more BTCC stars will take to the stage to answer questions about their 2015 plans as preparation for the 2015 is now in full swing.