The championship is on the line at the BTCC season finale, and five drivers are in a very tight points fight.

This weekend will see a new Dunlop MSA British Touring Car Champion crowned, at the legendary Brands Hatch GP circuit, as the 2013 draws to a close. Mathematically 5 drivers are in with a chance of taking the crown; however it will be Pirtek Racing’s Andrew Jordan who will head into the event as red-hot favourite to take his maiden BTCC crown, in his Honda Civic, as he heads into the event with a 34 point lead.

No one within the BTCC paddock could question if Jordan would be a worthy Champion as the reigning Independent Champion (another championship which Jordan should wrap up this weekend) is the only driver to score in every race so far this season and has also been the most consistent qualifier, finishing outside the top 5 in one session all season. 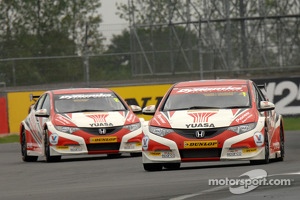 Jordan first entered the series in 2008 and heading into this weekend believes once again he will be on the pace although admits he can’t afford to do anything stupid and said, “The car will be quick at Brands and I’ll be quick there. But we need to be sensible, especially in the first race. We need to finish the first race and then try and wrap up the title as soon as possible. It will be a strong circuit for us, but anything can happen. Up to this point we’ve done everything we can and hopefully that will continue at Brands.”

Jordan’s main challengers will come in the form of both Honda Yuasa Racing drivers, triple BTCC champion Matt Neal and reigning champion Gordon Shedden, who sit 34 and 35 points behind respectively. Outgoing champion Shedden admits it is unlikely that anyone will be able to topple the Pirtek Honda driver although does hold onto the fact that anything can happen within the BTCC and said, “As long as he doesn't do anything daft, Andrew is in a really strong position. That said, this is touring car racing and anything can happen – I certainly didn't expect to win last time out at Silverstone so who knows what will happen at Brands.”

Nevertheless the Honda Yuasa Racing team will at least have something to celebrate, as it is all but certain that they will win both the manufactures/constructors championship and the Teams award as they hold a commanding lead in both championships. The final two drivers in the hunt for the championship are eBay Motors driver Colin Turkington and MG KX Momentum Racing’s Jason Plato. 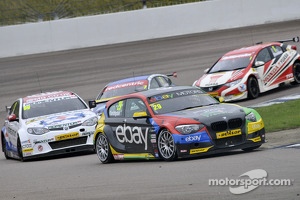 Turkington, who made his BTCC return this year having not raced in the series since becoming 2009 champion, has not looked like he has been away picking up 5 victories in 2013 despite being in a brand new car for this season. Turkington had looked like he was going to be in decent contention for a second BTCC crown, but a collision in race 3 at Silverstone now means he trails Jordan by a massive 48points and admits that it will just not be possible to overturn that many points and said, “Although I can mathematically do it the car won't be significantly quicker than everybody else for me to be able to overturn that many points. I'll be fighting back at Brands Hatch, but realistically now my aim is the top three.”

As for double BTCC champion Plato, this season has been a rollercoaster ride and, despite taking 6 victories and 3 poles, a below par few rounds and numerous issue’s mean he sits one point behind Turkington, 49 behind Jordan. Heading to Brands Hatch Plato who previously took a hat trick of wins around the GP circuit in 2009 admits, “I’m going to Brands Hatch with one thing in mind – while there are guys in front of me worrying about the championship, I’m going there to win, so they’d better get out of my way!”

This weekend we will also see yet another new competitor compete for Team Hard in their RCIB Insurance Racing Vauxhall Insignia, with Tom Barley the latest driver to step up from the teams VW cup scholarship.

Another change in driver line up will see 19 year old Jake Hill replace Will Bratt at Rob Austin Racing and will compete under the banner Exocet Racing. Hill has already had a taste of BTCC action racing at Croft this year for Addison Lee Motorbase racing in their S2000 Ford Focus impressing and taking a single victory in the Jack Sears Trophy.

Speaking of the deal Hill who has previously raced and won in the Ginetta support races to the BTCC said, “This is undoubtedly the biggest break of my career – the chance to drive a race-winning NGTC car in Britain’s premier motor racing championship and at its biggest event of the year. It’s a one-off for now – it’s the finale, after all – so it’s important to grab it with both hands and make the most of it. Exocet as well as Rob and WIX Racing are also putting a lot of faith in me so I want to repay that.” 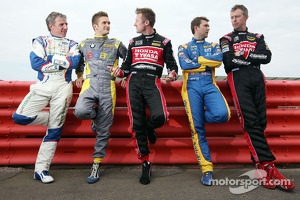 For the last time in the BTCC this weekend we are likely to see the older spec S2000 cars race in the series. This year the older spec cars have been allowed to race in their separate series competing for the Jack Sears Trophy, however with fading cars during the season which saw just two cars race last time out at Silverstone the cars are likely to be scrapped in 2014, although the series is likely to continue in some capacity.

However the series is likely to end on a high with a possibility of up to 6 cars competing in the final event. Run away champion Lea Wood will head the entry in his Wheel Heaven/Houseman Racing Vauxhall Vectra alongside runner up Liam Griffin in his Addison Lee Motorbase Ford Focus.

It is unsure whether David Nye will re-appear in his Welch Motorsport Ford Focus; however we are likely to see a new competitor driving the Finesse Motorsport Chevrolet Cruze with Jake Giddings, who currently competes for the team in the Clio Cup driver expected to step up after testing the car recently at Brands Hatch.

The big news to come from the Jack Sears Trophy heading into the weekend though will be the return of Shaun Hollamby, as he gives the hugely popular VW Golf one last outing. Hollamby raced the Golf in 2010 before stepping back to be team boss with Tom Onslow-Cole, Martin Byford and Ollie Jackson all having driven the Golf since. James Kaye drove the car for the first half of the season but switched to an S2000 Honda Civic for Snetterton with the team having not raced since then. It is unclear whether Kaye will return this weekend in the Civic. Nonetheless the news of the 2010 fans favourite driver, driving the VW Golf, will certainly go down well with everyone within the BTCC paddock.