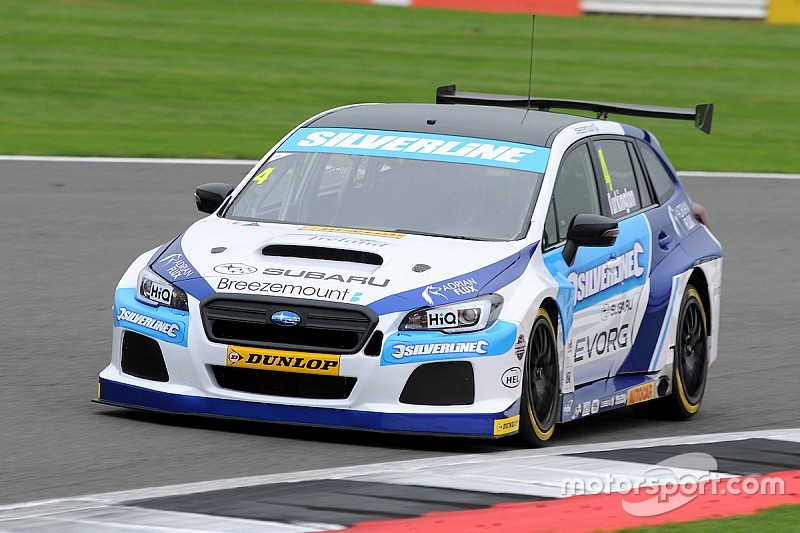 Team BMR Subaru driver Colin Turkington claimed his third pole position of the 2016 BTCC season in an unusual qualifying session, which was hit by rain after 10 minutes.

The session began in sunny conditions but with rain clouds on the horizon, but there was early drama for West Surrey Racing BMW driver Rob Collard, as he cut across the Indy circuit and into the pits on his out-lap with a technical issue.

Mat Jackson in the Motorbase Ford set the first benchmark, which was soon beaten by the Team BMR Subaru of Jason Plato and then the Triple Eight MG of Josh Cook.

On their second laps, Jackson, Plato and then Cook again moved to the top of the timesheets in succession, but then provisional pole was snatched by Speedworks Toyota driver Tom Ingram with a time of 1m33.478s.

Plato and Jackson’s third laps weren’t any better than Ingram's, with Plato moving up to second and Jackson third.

With eight minutes completed, there was trouble as Aron Smith spun into the gravel at Westfield, the Irishman rolling his Team BKR Volkswagen CC and landing on its roof, bringing out the red flag.

During the five-minute intermission, the rain finally arrived, mostly on the Grand Prix loop, with many drivers choosing not to even return onto the circuit when the session resumed with no expectations that any improvement was possible.

However, after the rain shower passed, the circuit began to dry quickly, with Turkington the first to make a significant improvement as he leaped from 17th to 12th, and then to pole in the Subaru Levorg GT.

The Northern Irishman continued to improve lap after lap, improving four more times to eventually secure pole position with a time of 1m31.838s - also grabbing another point in his championship charge to close to 36 from leader Sam Tordoff.

Ingram was as quick in the last segment of qualifying as he was in the first, and ended up second fastest, just six-thousandths of a second behind Turkington at the end, with Rob Austin securing a season-best third in the Handy Motorsport-run Toyota Avensis.

Jason Plato was the second-best placed of the title contenders in fourth in his Subaru, with Hunter Abbott qualifying in fifth in the Power Maxed Racing Chevrolet Cruze.

Matt Neal will start one spot further behind in 12th in his Honda, with Rob Collard recovering from his early dramas to qualify 13th.

The Motorbase Fords start in the worst positions of the eight title contenders, with Andrew Jordan 14th and Mat Jackson 20th.

Brands Hatch BTCC: Who needs to do what for the title