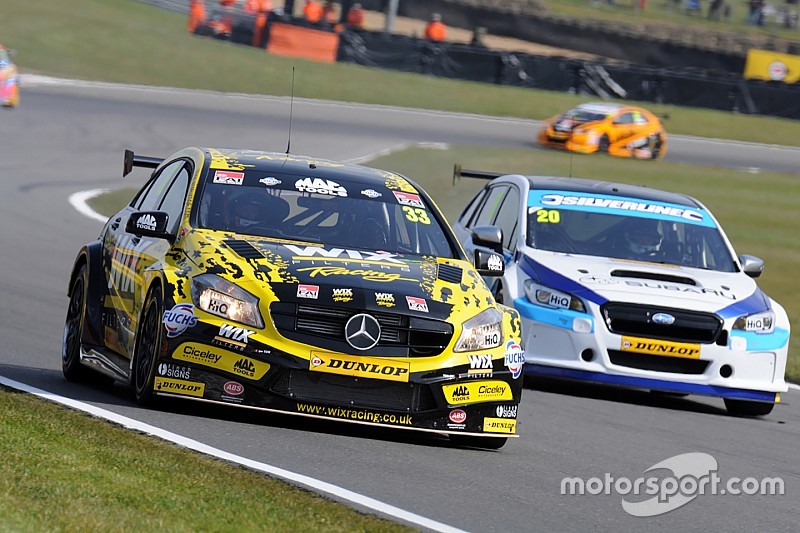 Adam Morgan held off a strong charge from the BMW pair of Sam Tordoff and Jack Goff to take his first win of the 2016 season in the final race of the day at Brands Hatch.

Andrew Jordan narrowly avoided a huge crash on the opening lap, sliding across the track on the exit of Paddock Hill Bend and only slightly tapping his team-mate Mat Jackson.

It was enough to puncture the left-rear of Jackson’s car while on the exit of Druids; a similar slide for Aiden Moffat also avoided any serious incident.

A strong move from Morgan forced his way into the lead ahead of Tordoff at Paddock Hill on the second lap, while further back, the Team Dynamics duo of Gordon Shedden and Matt Neal almost came together on the Cooper Straight, going side-by-side on the way in to Surtees.

The safety car was deployed on lap two to retrieve the stricken Kelvin Fletcher, who ended up in the Paddock Hill gravel trap following a spin, and Mark Howard, who had also gone off in to the gravel at Clearways.

From the restart, Morgan controlled the race, pulling out a gap on the BMW pairing of Tordoff and Jack Goff. As the race progressed, however, the BMWs began to reel the Mercedes man in.

Try as they might, they couldn’t find a way past and Morgan took his first win of the year, ahead of Tordoff and Goff taking the final podium spot.

Jordan won a drag race off the final corner to take fourth place from Neal, while Rob Collard recovered from his race two drama to take sixth.

Jeff Smith, Aron Smith, Moffat and Ash Sutton, who stalled from fourth on the grid, rounded out the top 10 finishers.

Colin Turkington took Subaru’s best result of the day with 12th, and Matt Simpson scored the first point of his BTCC career in 15th behind Hunter Abbott and Josh Cook.

The full 75kgs of success ballast for Gordon Shedden proved to be his downfall while running the softer tyre, the Scot holding his own until around the 20th lap - when he dropped further and further down the field, before going off into the tyre barriers at Paddock Hill Bend with what appeared to be a left-front puncture.

Plato: "We've got all year" to get Subaru winning