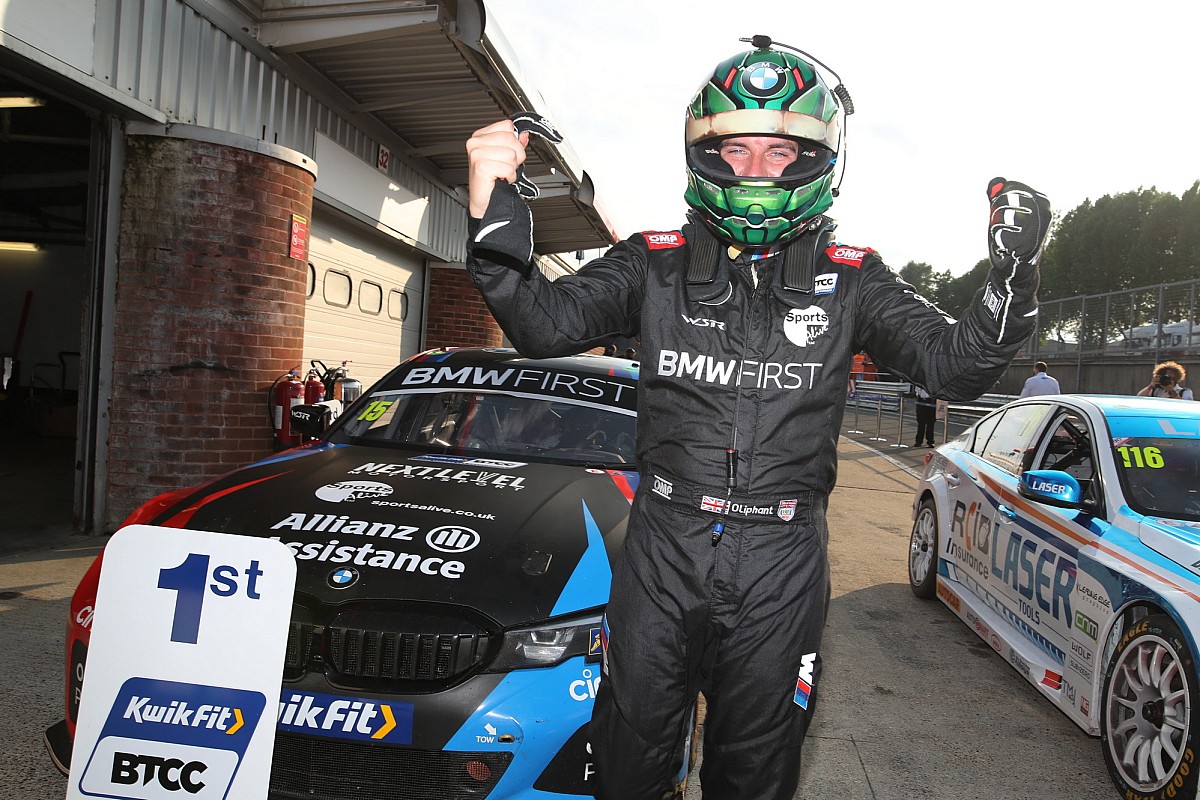 BMW’s Tom Oliphant soaked up everything Ash Sutton could throw at him to net his maiden British Touring Car Championship race win in the reversed-grid finale at Brands Hatch.

Sutton burst his Laser Tools Racing Infiniti through from 10th to second within the first lap and a half, and was on the bootlid of the West Surrey Racing-run BMW 330i M Sport soon after that.

Sutton feinted moves at the Druids hairpin, but Oliphant stayed resolute, and had enough speed at the end of the straights to prevent a decisive attack from his pursuer. Oliphant had Sutton all over him on the final lap, but clung on for victory by 0.324 seconds.

The other Infiniti of Aiden Moffat had started on pole and the Scot led the opening lap, with Stephen Jelley’s Team Parker Racing BMW 125i M Sport and Oliphant in hot pursuit. Jelley nosed to the inside of Moffat exiting Clearways on the opening lap, but Oliphant had the momentum to slip past both as they ran three-abreast into Paddock Hill Bend.

As well as Sutton, Rory Butcher was on the move in his Motorbase Performance Ford Focus, and by the end of lap four it was a three-car train at the front comprising Oliphant, Sutton and Butcher. But, just as he had when he lost victory in the opening race, Butcher suffered a left-front puncture with three laps remaining, forcing him out.

That promoted Jelley to the podium, and Chris Smiley to fourth in his Excelr8 Motorsport Hyundai, which had started from 13th. But Smiley then crashed exiting Sheene Curve, elevating Sutton to fourth.

Championship leader Colin Turkington made quiet progress up the field in his BMW, and immediately had the Team Dynamics-run Honda Civic Type R of Dan Cammish, who started 19th following his second-race exit, for company. But Cammish’s challenge ended when he pulled off the track and parked the Honda at Pilgrims Drop.

Turkington and the other Honda of Matt Neal – up from 24th – then passed the Trade Price Cars Racing Audi of James Gornall to finish fifth and sixth respectively. Gornall scored points for the second time today with seventh ahead of Tom Chilton (BTC Racing Honda).

Senna Proctor looked on for a good result in his Excelr8 Hyundai, which he started fifth and has been competitive all weekend. But Proctor got into a big slide at Druids on the opening lap, and as he recovered he made contact with Jack Goff, sending Adam Morgan onto the grass in avoidance.

As Goff’s Team Hard Volkswagen slewed across the track, it collected the Speedworks Motorsport Toyota Corolla of Tom Ingram, putting both out. Proctor recovered from that moment to finish ninth, with Sam Osborne the final top-10 finisher in his MB Motorsport Honda.

The other MB Honda of Jake Hill failed to finish yet again after engine problems in race two, with a puncture this time denying him a top-10 place, while Ollie Jackson was in the top eight late on before his Motorbase Ford went into the Paddock Hill Bend gravel.