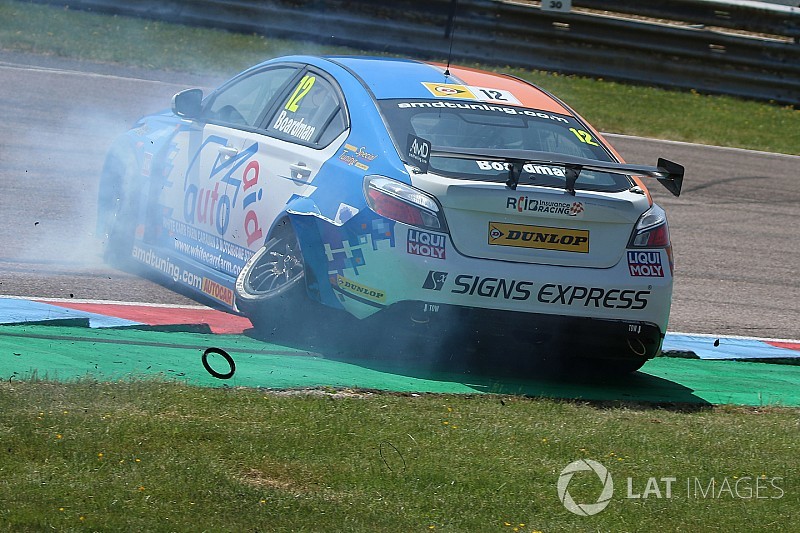 Tom Boardman has split with the AmDTuning.com British Touring Car Championship team, which is looking for a replacement driver to complete the season.

Boardman, a race winner in 2011, rejoined the BTCC after a six-year break to race one of AmD’s ex-works MG6 GT machines alongside Scot Rory Butcher.

The Lancastrian finished fourth in the rain-affected second round of the championship at Brands Hatch but has only featured in the top 15 on one other occasion. He is 27th in the standings.

"It is always a difficult decision to make changes to any of our team personnel but the long term aims and goals of the team must come first,” said AmDTuning.com boss Shaun Hollamby.

“We will be replacing Tom Boardman for the second half of the BTCC. I would like to thank Tom for his efforts this year and wish him luck with his future motorsport.”

Hollamby said he was in contact with possible replacement drivers and a decision would be made by the end of the month.

Boardman said he wasn't aware of the decision and it had come as a shock.

“The first I knew about this was when I read it on social media and I was very disappointed. My results were varied in the first half of the season having had problems with the car’s set-up in qualifying," he said.

“The fact that I am actually leading the Forever Forward standings [a Dunlop-backed award for the most positions gained in a race] surely shows my racing abilities are very much alive.

“However, if this is AmD’s decision so let it be. I’m sure I will live to fight another day even if this may be next season now.

"I will finish off by thanking the AmD Team for giving me the opportunity to race the MG in the BTCC and wish them well for the rest of the season.”

AmDTuning, which also runs a brace of Audi S3 saloons for Ollie Jackson and Sam Smelt, will be present at the official BTCC TOCA tyre test at Snetterton on Wednesday and Thursday next week.

The team is required to find a driver to run in the second half of the season under the terms of its TOCA BTCC licence, which all entrants must have.

Seven-time race winner Tom Onslow-Cole will return to the wheel of a British Touring Car Championship machine at Snetterton next week when he takes part in the official Dunlop tyre test.

Onslow-Cole, who will drive a Team Hard VW CC for one of the two days on the Snetterton 300 layout, has not raced in the BTCC four years and has recently concentrated on endurance racing.

Onslow-Cole said: “The BTCC is bigger and better than ever and although I have been away from the grid building a successful GT career, the appeal of the BTCC never goes away.

"It will be interesting to drive one of the new RML-specification touring cars and see how they have changed over the last few years.”

Dan Welch is also due to test one of the cars for a day, along with Team Hard’s Ginetta GT4 Supercup race winner Carl Boardley.